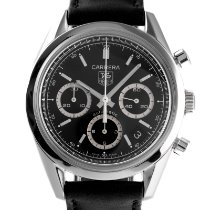 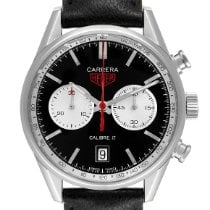 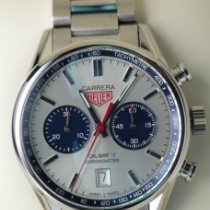 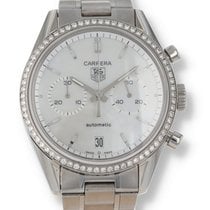 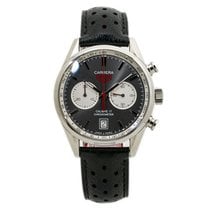 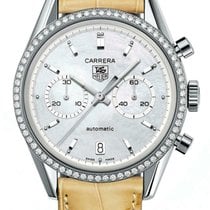 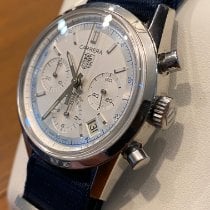 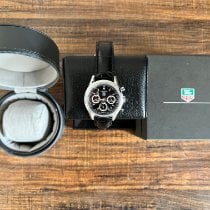 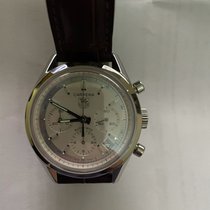 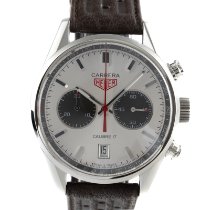 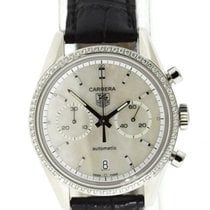 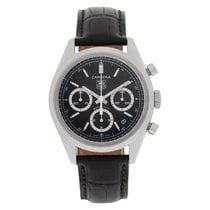 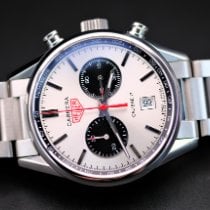 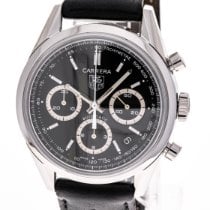 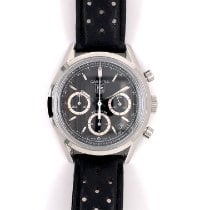 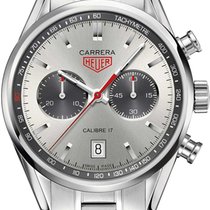 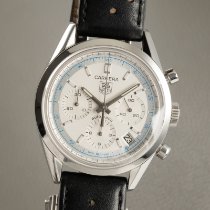 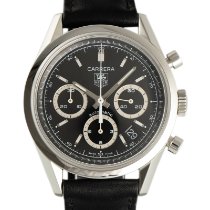 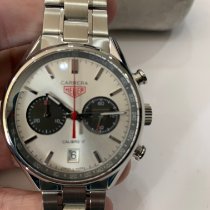 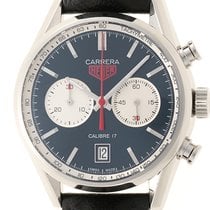 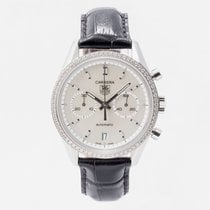 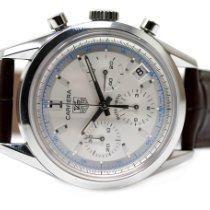 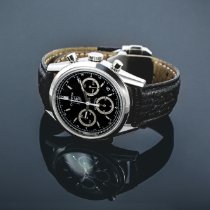 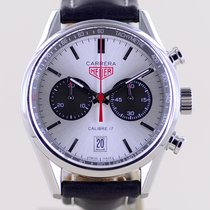 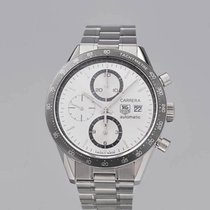 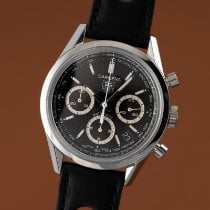 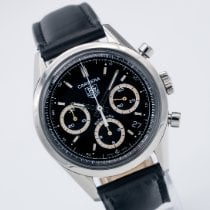 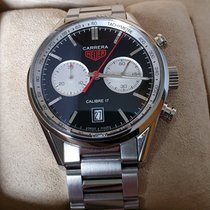 The TAG Heuer Carrera Calibre 17 is a great choice for fans of retro watches. Its design is reminiscent of early Carrera chronographs from the 1960s. The collection's top models are chronometer-certified limited editions.

A Tribute to Jack Heuer and the 1960s

With its perforated racing straps, multicolored dials, and bi or tri-compax subdial layouts, the TAG Heuer Carrera Calibre 17 looks like something straight out of the 1960s. This chronograph gets its inspiration from the earliest Carrera models. Coming in at no larger than 41 mm in diameter, it's extremely comfortable on the wrist. There's also a number of limited editions that are interesting for collectors and make a sound investment. Some references, such as the CV211A from 2015, have even increased in value over time. This wristwatch with a blue dial was limited to a run of 500 pieces.

The Carrera Calibre 17 ref. CV2119 is another interesting collector's item. Only 3,000 copies of this timepiece exist. TAG Heuer released both of these chronographs in 2012 in celebration of Jack Heuer's 80th birthday. Heuer once served as the company's CEO and even designed the original Carrera in 1962. He named this timepiece after the famous Carrera Panamericana road race.

How much does the TAG Heuer Carrera Calibre 17 cost?

TAG Heuer presented a limited edition of the Carrera Calibre 17 at Baselworld 2005. Limited to a run of 1,964 pieces, it celebrated 40 years since the release of the first Carrera. Back then, many people still believed that the Carrera debuted in 1964. Today, however, we know that the first Carrera watches had already seen the light of day the year before. Even so, the Carrera Jack Heuer 40th Anniversary reference CV2117 is a highly coveted timepiece.

The dial design takes its cues from the 1969 Carrera ref. 1153S. It's predominately silver in color and has two gray subdials at 3 and 9 o'clock. The ring around the dial's edge is the same shade of gray and features a tachymeter scale. There's also a date display at 6 o'clock. Unlike its historical predecessor, the Carrera Jack Heuer 40th Anniversary's case is round instead of oval. The position of the crown is also different, having moved from the left-hand side at 9 o'clock to the right at 3. A perforated leather racing strap underscores this timepiece's roots in motorsport.

TAG Heuer released another Carrera Jack Heuer in 2012 in honor of the former Heuer CEO's 80th birthday. This timepiece was limited to a run of 3,000 pieces worldwide. Perhaps the most notable feature of this Carrera Calibre 17 is its case back, which is engraved with Jack Heuer's red signature and a black Heuer family crest. The leather racing strap boasts a red inner lining that matches the signature.

On the front, you'll find a silver sunburst dial with two gray subdials: a small seconds at 3 and a 30-minute counter at 9 o'clock. The date display sits at 6 o'clock. You can use the tachymeter on the dial's gray outer ring to calculate speeds, for example. Luminous material on the hour and minute hands makes telling the time in the dark a breeze. The long and narrow chronograph second hand, tips of the subdial hands, 80 on the tachymeter scale, and "Heuer" inscription below 12 o'clock add a few splashes of red to the dial's otherwise neutral color palette. In contrast to the 40th Anniversary edition, this Carrera Calibre 17 only bears the company's historical name (Heuer) without the addition of "TAG."

The Carrera Calibre 17 as a Chronometer

In 2013, TAG Heuer launched two Carrera Calibre 17 models with certificates from the Official Swiss Chronometer Testing Institute (COSC). Chronometers are especially accurate and can only deviate by a maximum of +6/-4 seconds per day.

The first of these Calibre 17 chronometers bears the reference number CV5110 and has an anthracite sunburst dial. Silver elements include the subdials and the dial's outer ring with a tachymeter scale. The other model, the reference number CV5111 , has a silver sunburst dial with a blue 30-minute counter, small seconds, and tachymeter scale around the dial's edge. Both models share a red chronograph second hand and red Heuer logo. The same logo appears on the stainless steel case back. You can recognize these certified models by the "Calibre 17 Chronometer" inscription on their dials.

Swiss watch manufacturers have been releasing an increasing number of watches with blue dials in recent years. This includes TAG Heuer and their ref. CV211A from 2015. This Carrera Calibre 17 has a dark blue sunburst dial, silver subdials, and a silver outer dial ring. Like the Jack Heuer 80th Birthday Edition and both chronograph models, the CV211A's dial features several red accents. However, its Calibre 17 is not chronometer certified.

Its case back is engraved with the red Heuer logo and the words "Limited Edition." Only 500 examples exist of this Carrera Calibre 17 with a blue dial. Plan to spend about 4,200 USD on a pre-owned timepiece. Prices for this chronograph have recently gone up by a few hundred dollars.

The Carrera Calibre 17 with a Panda or Reverse Panda Dial

TAG Heuer introduced the Carrera Calibre 17 with "panda" and "reverse panda" dials in 2016. The latter has a black dial with white or silver subdials. On the other hand, the panda dial is white – or, in this case, silver – with black subdials for the small seconds and 30-minute counter. The outer dial ring matches the subdials in both models. These "panda" timepieces also feature the same red elements found on previous models.

The TAG Heuer Carrera Calibre 17 Panda (ref. CV211D) and Reverse Panda (ref. CV211E) are extremely rare. Both models require an investment of around 4,200 USD. You can save a few hundred dollars by purchasing a pre-owned timepiece – if you can find one, that is.

Features of the Calibre 17

The TAG Heuer Calibre 17 is an automatic chronograph movement based on the proven ETA 2894-2. Its base caliber is a relatively flat 3.6 mm thick, making it well-suited to fitting a chronograph module. The Calibre 17 has a 42-hour power reserve and ticks at the standard 28,800 alternations per hour (A/h), or 4 Hz.