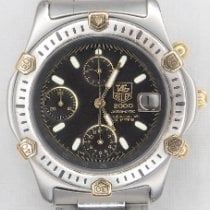 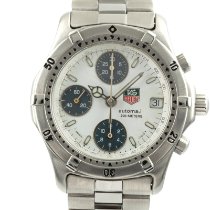 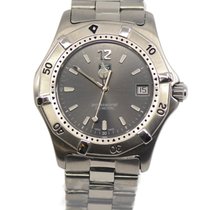 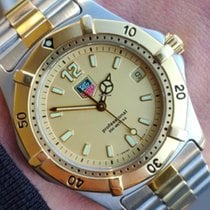 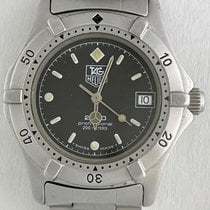 The 2000 is one of TAG Heuer's most successful diving watches. It's available as a three-hand watch or chronograph. The Swiss watch manufacturer outfitted it with a quartz or automatic caliber. This collection was renamed "Aquaracer" in 2005.

A Classic Watch from the 1980s

The 2000 is one of the most long-lived and successful TAG Heuer collections. This Swiss watch manufacturer introduced this series in 1982 and continued producing it until 2005, at which time it was succeeded by the popular Aquaracer collection.

TAG Heuer released innumerable versions of the 2000 over the course of its 23-year production run. However, most are relatively hard to tell apart but for their finer details. Eddy Schöpfer designed the stainless steel case that was used for every 2000 timepiece. It's water resistant to 200 m (656 ft) and has a distinctive crown protector and a massive diving bezel. Bezel rider tabs make this feature especially easy to operate, even when wearing diving gloves.

The 2000 is available as a simple three-hand watch or with a chronograph function. Quartz movements power a majority of these watches. That being said, this series also contains timepieces with an automatic ETA caliber or a hybrid movement that combines a quartz caliber with a mechanical chronograph module from Dubois Dépraz.

Models from the 80s with a Quartz or Hybrid Caliber

The 2000 series already contained both three-hand models and chronographs at its release in the early 1980s. The first generation of three-hand watches was between 28 and 38 mm in diameter and used the quartz ESA caliber 555.112. This movement was replaced by the near-identical ETA 955.112 in 1985. TAG Heuer's designers focused on maintaining a clean dial. There's a fine minute scale, luminous hour indices, and a date at 3 o'clock. Glow-in-the-dark Mercedes hands round off the dial. You can purchase a pre-owned timepiece from this era for between 320 and 400 USD.

TAG Heuer outfitted the first-generation chronographs with a hybrid movement. They used the quartz ETA caliber 955.232 as the base for the time and date display and added a mechanical Dubois Dépraz 2000 module with a chronograph function. These watches come with a satin-brushed stainless steel or two-tone case. Prices depend on the model and its condition and range from 450 to 800 USD.

The late 1980s saw the arrival of the Super 2000. These watches feature the same Dubois Dépraz chronograph module; however, here it's combined with the automatic ETA caliber 2892. At 40 mm, this watch is quite a bit larger than its quartz-powered counterpart. Its bezel rider tabs are also more prominent and stamped with the TAG Heuer logo. What's more, the addition of a tachymeter scale around the edge of the dial lends this watch a sporty touch. Plan to spend between 900 and 1,100 USD for a well-maintained timepiece.

However, the biggest change took place inside the watch. TAG Heuer began offering three-hand models with the automatic ETA caliber 2824-2 in addition to models with a quartz movement. The chronographs also received a technological upgrade in the form of the quartz ETA 251.262 and the proven automatic Valjoux 7750. You can easily tell the two versions apart by the layout of their subdials: The automatic version follows the Valjoux's 6-9-12 layout with a date at 3 o'clock, while the quartz chronographs have their subdials at 2, 6, and 10 o'clock with a date at 4.

Prices for well-maintained quartz models with three hands range from 340 to 560 USD. If you prefer automatic watches, those prices climb to between 730 and 870 USD. When it comes to the chronographs, quartz-powered timepieces demand roughly 640 to 820 USD. Automatic models change hands for some 900 USD.

The final incarnation of the TAG Heuer 2000 debuted in 2004 and had the term "Aquaracer" in its name. Only a year later, TAG Heuer decided to rename the entire collection simply Aquaracer. Therefore, it comes as no surprise that the final 2000 watches are nearly identical to today's Aquaracer models.

The most obvious difference between the Aquaracer 2000 and its predecessors is its bezel. The newer models have a black or blue aluminum bezel paired with a matching black or blue dial. Inside, you'll find the same quartz and automatic ETA movements used in the previous editions.

A three-hand model with a quartz movement demands around 900 USD. The automatic version costs about 1,000 USD. You'll have to dig a bit deeper in your pockets for the chronograph model with a Valjoux caliber. This timepiece requires an investment of roughly 1,700 USD in good condition.