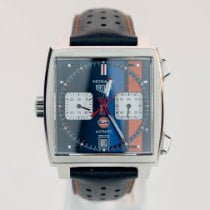 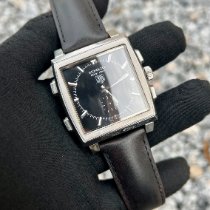 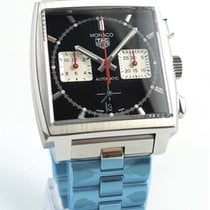 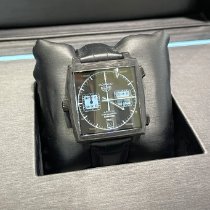 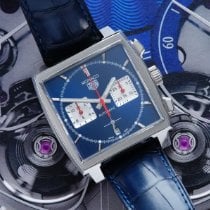 The TAG Heuer Monaco is a true classic. Its square case, crown on the left-hand side, and motorsport-inspired design help this chronograph stand out from the crowd.

The TAG Heuer Monaco is an industry icon. Originally introduced in 1969, it was one of the first automatic chronographs. Two years later, it would make its Hollywood debut on Steve McQueen's wrist in the classic film "Le Mans." What's more, it was the world's first water-resistant chronograph with a square case.

from the Calibre 11, also known as the Chronomatic.

TAG Heuer has been outfitting the Monaco almost exclusively with calibers from ETA and Sellita since 1997. These movements allow the crown to be positioned on the right-hand side; however, the luxury watch manufacturer still produces a line of Monacos with the crown at 9 o'clock for those looking for something particularly close to the original. As of 2019, the Monaco is also available with the in-house caliber Heuer 02. Models with this movement have their crowns on the right.

The Monaco celebrated its 50th anniversary in 2019. In honor of this milestone, TAG Heuer introduced five limited editions with different designs. Each watch represents a different decade in the Monaco's history. In 2021, the manufacturer released the first Monaco with a green dial: the aptly named Monaco Green Dial.

How much does a TAG Heuer Monaco cost?

Prices for a TAG Heuer Monaco vary widely depending on the watch's age, condition, and caliber. An entry-level watch like the ref. CW2111 with the ETA-based Calibre 17 will set you back around 3,000 USD. If you'd prefer a timepiece with an in-house caliber, such as the Heuer 02, be prepared to dig a bit deeper into your pockets. For example, the ref. CBL2111 demands roughly 5,900 USD. Exotic vintage editions like the ref. 1133 with the original Calibre 11 require investments of well over 12,000 USD. The top Monaco model is the limited-edition WAW2170. This platinum timepiece uses the in-house Calibre V4 and sells for about 71,500 USD.

TAG Heuer reintroduced the Monaco in 1997. The base caliber is now an ETA 2892 or Sellita SW300-1; however, like the original Calibre 11, the chronograph module still comes from Dubois Dépraz. One example of a new edition is the Monaco ref. CS2110. It has its crown on the right, a black dial, a small seconds at 3, a date display at 6, and a minute counter at 9 o'clock. This watch was limited to a run of 5,000 pieces and changes hands for approximately 4,300 USD.

The Monaco Sixty-Nine CW9110 is an extraordinary timepiece. This reversible watch has two movements: one manual, one quartz. The mechanical movement, the ETA 7001, powers the conventional time display with three hands. On the other hand, the quartz movement on the reverse side is an extremely accurate stopwatch and can also function as an alarm. This watch costs around 3,800 USD in mint condition.

The New Generation of Calibre 11 and Calibre 12 Watches

with the crown on the left.

Other than that, these two timepieces are identical. The small seconds sits at 3, the date display at 6, and the minute counter at 9 o'clock. Each is available in a black or blue edition and costs between 4,300 and 5,700 USD new.

For something more colorful, you should turn to the Monaco Gulf models with the Calibre 11. Their dark blue dials feature light blue and orange vertical stripes – the official colors of Gulf Racing. Plan to spend about 5,700 USD on a mint-condition timepiece.

The Monaco celebrated its 50th anniversary in 2019. TAG Heuer marked the occasion with the release of five limited editions, each of which represents a decade from the Monaco's history. The watches are named after their respective decades; however, there are some shared features across all five models. Each watch features a 39-mm stainless steel case and the Sellita-based Calibre 11. Furthermore, they are all limited to runs of 1,696 pieces and have official list prices of 6,550 USD. Since then, the market value of these timepieces has increased rapidly, making them worthy investments for collectors and fans of the Monaco.

The Monaco 1969-1979 comes with warm green Geneva stripes on its dial. Its subdials are gray, while the hour indices are yellow. An artificially aged calf leather strap holds the watch securely on the wrist. Mint-condition models require an investment of up to 15,500 USD. The next watch in the series, the Monaco 1979-1989, features a red sunburst dial. Unlike other Monaco models, its subdials have rounded edges. The subdials and indices are white. TAG Heuer mounts the final watch on a black leather strap. Never worn, this timepiece sells for roughly 12,000 USD.

The Monaco 1989-1999 boasts a gray rhodium-plated dial. Red and blue accents on the subdials, chronograph seconds hand, and indices lend this model a nice sense of contrast. Fittingly, the blue leather strap features red stitching. You can find this watch on Chrono24 for around 9,600 USD. The Monaco 1999-2009 stands out with its black dial, white subdials, and red indices. The circular minute track also jumps out in stark white. A black leather strap with white stitching completes the look. With a bit of luck, you may be able to get your hands on this model for less than 9,500 USD.

The final anniversary edition is the Monaco 2009-2019. Its design is rather subdued and combines an anthracite sunburst dial with silver subdials. The indices and hour and minute hands are all plated in black gold, and the black leather strap features white stitching. As of publication, there were no listings for this timepiece on Chrono24.

TAG Heuer presented the first Monaco with the in-house Calibre Heuer 02 in 2019, two years after the movement debuted inside an Autavia chronograph. The Heuer 02 boasts an 80-hour power reserve, meaning it can run for nearly twice as long as the other automatic calibers in the Monaco collection.

Other than the position of its crown, the ref. CBL2111 bears a striking resemblance to the original Monaco from 1969. Its stainless steel case measures 39 x 39 mm, and it features a blue sunburst dial with silver indices and silver subdials at 3 and 9 o'clock. You'll also find a small seconds and date at 6. The chronograph hands are red, while the blue alligator leather strap perfectly matches the dial. Prices for this model sit around 5,900 USD on Chrono24. The version on a stainless steel bracelet demands a similar price tag.

TAG Heuer has been the official timekeeper of the Historic Grand Prix of Monaco since 2020. The manufacturer celebrated this new partnership with the launch of the Monaco Grand Prix de Monaco (ref. CBL2114). Limited to a run of 1,000 pieces, this timepiece takes its color scheme from the race itself. Thus, the watch features a red and silver dial with red subdials. The event's small silver classic car logo appears between the hour indices at 1 and 2 o'clock. Finally, the in-house Calibre Heuer 02 ticks away inside the 39-mm stainless steel case. This watch changes hands for roughly 9,600 USD on Chrono24, which is well over its official list price of 7,050 USD.

Recent trends have seen the rise of watches with green dials. TAG Heuer joined the movement in 2021 with the release of the ref. CBL2116 Monaco Green Dial. This special-edition timepiece is limited to a run of 500 pieces. Depending on the angle, its sunburst dial appears in different shades of green. The manufacturer also outfits this timepiece with black subdials at 3 and 9 o'clock and silver-colored hands and indices. Like all modern Monacos, the Calibre Heuer 02 with an 80-hour power reserve powers this wristwatch. While its initial list price was 6,650 USD, you should plan to spend around 11,000 USD on this model today.

The Monaco V4 is an extraordinary member of the Monaco family. TAG Heuer first presented it as a concept watch in 2004 before releasing a limited series of 150 pieces in 2009. What makes this watch so unique is its caliber. It's the first caliber to feature a linear mass made of tungsten, Heuer's patented belt-drive system, and a V-shaped plate with four ball-bearing-mounted barrels. The barrels are designed to resemble the cylinders found in a Formula 1 race car's engine.

You can purchase the titanium version of this unique watch for around 32,500 USD. If you prefer the platinum edition, the price climbs to between 41,000 and 72,000 USD depending on its condition.

The very first Monaco bears the reference number 1133. It uses the Chronomatic Calibre 11, which you'll also find in Heuer's Autavia and Carrera watches from the same era. At the time, this movement was the pinnacle of watch technology. A Büren caliber with a micro-rotor serves as its base, and a module from Dubois Dépraz gives it a chronograph function. However, this movement was only used for a short period of time before being replaced by the more reliable Calibre 12 that ticks at a higher frequency. Both movements feature a minute counter at 3, a date display at 6, and an hour counter at 9 o'clock. There is no small seconds dial, so you can only tell if the watch is working by the movement of the minute hand.

Heuer only ever made a few thousand copies of this 39-mm stainless steel timepiece with a blue or gray dial. Today, well-maintained Monaco 1133s are coveted collector's items and demand prices of about 15,500 USD.

The ref. 1533 shares its case, color options, and basic design with the 1133. However, it gets its power from the trimmed-down Chronomatic Calibre 15. Instead of an hour counter, this movement comes with a small seconds dial at 10 o'clock. Its minute counter and date display retain their respective positions at 3 and 6 o'clock. You can find this timepiece on sale on Chrono24 for roughly 8,400 USD.

Heuer's engineers took a slightly different direction for the Monaco refs. 73633 and 740303. While they are consistent with their predecessors in terms of size and color, they use the manual Valjoux calibers 7736 and 7740 instead of the Chronomatic.

The most obvious consequence of this change is the shift of the crown to the right-hand side between the two push-pieces. Like the original Monaco, the ref. 74033 has its date display at 6 o'clock and hour and minute counters at 3 and 9 o'clock, respectively. However, the ref. 73633 exchanges the date display for a small seconds dial. Be sure to have between 9,500 and 12,000 USD on hand for either model.