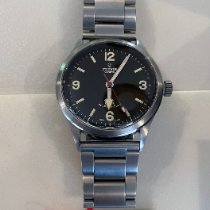 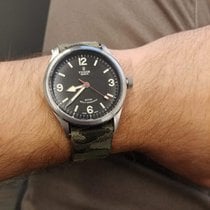 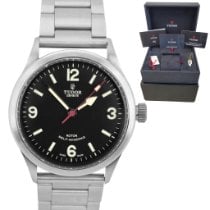 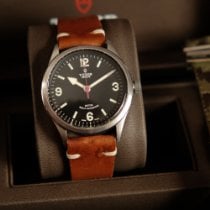 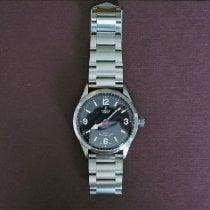 The Heritage Ranger is one of Tudor's most popular retro watches. The watch's design is simple and inspired by historic watches. Reliable caliber technology is responsible for precision and accuracy while keeping prices affordable.

Retro watches from the Heritage collection are among the most popular models from the Swiss manufacturer Tudor. The Heritage Ranger has been a member of this family of watches since 2014. The eponymous model from the 1960s serves as the aesthetic predecessor for the current Ranger. Even back then, the simple, linear tool watch resembled the Rolex Explorer, which should come as no surprise. As a Rolex daughter company, Tudor has used many Rolex components in their own watches over the years, such as cases or bands. To keep the prices affordable, movements from third parties were used, as is still the case with the Heritage Ranger today.

The widely used 2824 caliber from ETA ticks away inside this 41-mm watch. The movement is known for its high level of reliability. However, Tudor has been outfitting more and more watches with in-house movements since 2015. These include several Black Bay and Pelagos models. The Heritage Ranger comes with your choice of a three-piece link stainless steel bracelet, a calf leather band, or a cuff band. The cuff band is also made of calf leather and has an underlay so that the case back doesn't touch the skin. This band also accentuates the military flair of the watch, which is enhanced even more when it is traded for the woven textile band with a camouflage pattern that is also included with purchase.

How much does a Tudor Heritage Ranger cost?

A Tudor Ranger Heritage with the reference number 79910 costs around 2,000 euros in mint condition. Prices only drop by a few hundred euros for a pre-owned piece in very good condition. Since this model has only been on the market for a few years, there aren't many pre-owned watches available at the moment. Vintage examples of the original Ranger from the 1960s are extremely rare today, making them very difficult to find. You are much more likely to come across a Ranger II from the 70s, which you may be able to get for less than 2,000 euros with a little luck. Examples in very good condition, however, can cost as much as 3,000 euros. The design of the Ranger II served as Tudor's inspiration for the North Flag, a modern tool watch with an in-house movement. Be prepared to spend around 2,600 euros for this watch.

When looking at the Tudor Heritage Ranger for the first time, you can't help but notice its simple, linear design. Its most important design features are the matte black dial; bright indices; and Arabic numerals at 3, 6, 9, and 12 o'clock. In addition, it has a rod-shaped minute hand and an arrow-shaped hour hand, which are both generously covered in luminous material. The luminous material's color underscores the watch's retro look as much as the hour markers that have the same color and glow just as brightly in the dark. Unlike many other watches, the Arabic numerals and indices are not applied but rather painted onto the dial. This authentic design feature highlights the timepiece's vintage look.

Even the riveted lugs, which are becoming less and less common in luxury watches, are reminiscent of sports watches from the 60s. These small holes also have a practical advantage: they make changing the band much easier. The Tudor Heritage Ranger has three band options, and every complete set includes a high-quality, woven camouflage textile band. The latter only accentuates the watch's military look. Even the calf leather cuff band with an underlay gives the Heritage Ranger a military flair. This type of watch band is also known as a "bund strap" by watch connoisseurs since they were used by the German army. The TAG Heuer Flyback Chronograph with the reference number 1550SG is a prominent German pilot's watch that is often worn on a cuff band with an underlay.

The Tudor Heritage Ranger is also available with a normal calf leather band or a three-piece link Oyster band made of stainless steel. What makes this bracelet special is that it doesn't have round-shaped end links and thus doesn't rest directly on the case. Similar to the normal leather band, the steel version has a straight end link. Though it's not historically authentic, it looks great with the Heritage Ranger. Historic Ranger models, on the other hand, have Oyster bands with tailor-made, rounded ends. The current stainless steel band is entirely satin-brushed, just like the case. Due to the thin bezel, the dial is somewhat larger and therefore easier to read. The ridged crown is easy to operate and adorned with the Tudor rose. The domed sapphire glass is also reminiscent of historic models, whose displays were protected by domed plexiglass.

What design features does the Tudor Heritage Ranger have?

Powered by a Workhorse

The Tudor Heritage Ranger is powered by the renowned caliber 2824. This ETA movement also ticks away in many other three-hand watches from the Genevan manufacturer: for example, the early models of the Pelagos or Heritage Black Bay. For their watches, Tudor exclusively uses movements in the "top" quality category , which have a higher level of craftsmanship and are more accurate than the simpler "standard" and "elaboré" models. The best level of ETA movement is called "chronomètre" and is certified as a chronometer by the Official Swiss Chronometer Testing Institute (COSC). What's more, the Rolex daughter company refines every movement. The automatic caliber 2824 has a power reserve of 38 hours and its balance wheel swings with a frequency of 28,800 half oscillation per hour (A/h).