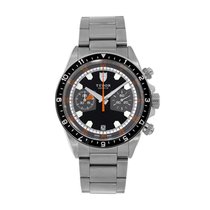 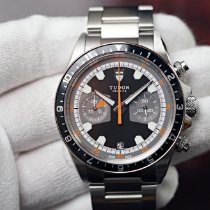 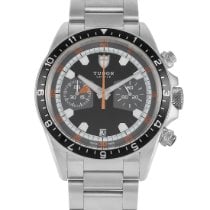 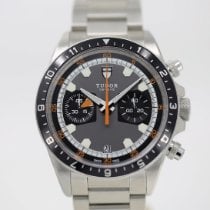 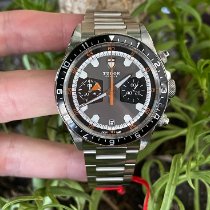 Tudor Heritage – from Chronographs to Alarms

Watches with vintage designs have been in vogue for a while now, leading many manufacturers to add retro watches to their catalogs. One of these is the Genevan manufacturer and Rolex daughter company Tudor, which has been producing reliable timepieces at affordable prices for over 90 years. One of Tudor's most well-known collections at the moment is the Heritage. This collection is characterized by retro designs inspired by historic Tudor watches. The most popular watch models in this series include numerous versions of the Black Bay. Their diving watches with in-house movements and the Black Bay Chrono – a chronograph with an in-house movement – are especially sought after. Another popular model is the Heritage Black Ranger, which is reminiscent of the eponymous watch from the 1960s.

The Heritage Advisor is an automatic watch with an alarm function . Its classic design helps it stand out from the many sports watches in the Tudor Heritage collection. The Advisor is suitable as a dress watch for the workplace or on business trips. A band made of alligator leather and a cognac colored dial underscore the traditional character of this luxury watch. If you prefer something sportier, check out the variant with a three-piece link stainless steel Oyster bracelet.

How much do watches from the Tudor Heritage collection cost?

Prices for watches in the Tudor Heritage collection range from 1,700 euros for a pre-owned Heritage Ranger or Black Bay 41 and around 6,000 euros for a Black Bay Bronze Blue in mint condition. The latter is an aluminum bronze diving watch with a blue dial and bezel. A highlight is the Black Bay Chrono introduced at Baselworld in 2017. You can buy one for 3,600 euros. This is a relatively affordable price when you consider that this chronograph is powered by an in-house movement. The stainless steel and gold bicolor diving watch Black Bay S&G is also a certified chronometer, utilizes an in-house Tudor movement, and costs about 3,500 euros. The price for an Advisor with an alarm function comes in at approximately 4,300 euros.

Black Bay is one of the largest and most popular series in the Tudor Heritage collection. Most Black Bay models are inspired by vintage diving watches, such as the Tudor Submariner with the reference number 7924. Features of the current retro versions include domed sapphire glass, a large winding crown without any guard, and the so-called snowflake hands distinguished by square boxes at their ends. Originally introduced with a rotating red bezel in 2012, Black Bay watches with a blue or black bezel have since been added to the catalog. There is also the Steel with a stainless steel bezel, the aluminum bronze version, the black-coated Dark, and the bicolor S&G.

In addition, you will find a chronograph with an in-house movement and the Black Bay 36 and 41 in the Black Bay Heritage series. Since none of these three models has a unidirectional bezel, they are not diving watches. However, they are water resistant enough to take swimming and snorkeling. The polished bezels and dial designs of the Black Bay 36 and 41 are similar to the Explorer, though the Tudor version is much more affordable due to its ETA movement. The 36-mm version costs almost 2,000 euros, whereas the 39-mm Rolex Explorer costs around 5,300 euros. At 2,100 euros, the Black Bay 41 is also markedly more affordable than the Rolex.

In 2016, Tudor began equipping almost every Black Bay model with an in-house movement. These calibers all have a 70-hour power reserve and a certificate from the Official Swiss Chronometer Testing Institute (COSC) in common. Furthermore, the Genevan manufacturer uses silicon balance springs so that their watches are less vulnerable to magnetic fields. The balance frequency is the same as the former ETA caliber 2824 at 28,800 half oscillations per hour (A/h).

The Ranger is one of the most affordable models in the Tudor Heritage collection. Its comparably low price for a luxury watch can be explained by its outsourced ETA caliber 2824. ETA 2824-based movements tick away in innumerable watches and can be repaired by almost any watchmaker. The eponymous model from the 1960s is the design godfather for the Heritage Ranger. The domed sapphire glass; the painted indices and numerals at 3, 6, 9, and 12; as well as the arrow-shaped hour hand and rod-shaped minute hand are all reminiscent of the vintage watch.

Tudor offers multiple band options: you have the choice between a three-piece link Oyster bracelet with a straight end, a dark brown leather band, or a light brown leather cuff band with an underlay. Each version also comes with a high-quality woven textile band either in red or with a camouflage design. Since the Heritage Ranger has drilled lugs, it is easy to change the band. You can purchase this watch in mint condition for around 2,000 euros.

You can't help but notice the colorful, eye-catching designs of the Heritage Chrono series. Their looks are unmistakably inspired by the Oysterdate chronograph from the 1970s. Among collectors, these vintage watches are known by the nickname "Montecarlo" since their multicolored dials resemble roulette wheels. One of the most popular models from the current line is the Heritage Chrono Blue, which features a white and blue dial, a blue dial edge, and a blue rotating bezel. The latter can be turned in both directions and has a 12-hour scale so that it can show a second time zone. The historic predecessor of this timepiece is the Tudor Oysterdate "Montecarlo" with the reference number 7169/0, which you can still find pre-owned and in very good condition. While the vintage timepiece can cost more than 12,000 euros, the current Heritage Chrono versions are notably more affordable at around 3,000 euros.

Tudor opted to use the proven and flat ETA-based caliber 2892 and made it into a stopwatch with an additional module. This automatic movement has a power reserve of 42 hours. In addition to the small seconds dial at 3 o'clock and the 45-minute counter at 9 o'clock, this watch also features a date display at 6 o'clock. Unlike the vintage models, today's models no longer have a Cyclops lens over the date window. Thanks to the screw-down crown, pushers, and case, this Tudor Heritage is water resistant to 150 m (15 bar), leaving nothing between you and a dip in the sea. The case is satin-brushed on the front and back and polished on the sides.

Features of the Tudor Heritage Chrono

Heritage Advisor – the Sporty Dress Watch with an Alarm

If you're in the market for a watch suitable for everyday wear, you'll find the perfect companion in the Tudor Heritage collection: the Heritage Advisor. This timepiece with an alarm function is somewhat more conservative than other Heritage models. The Advisor's aesthetic roots stretch all the way back to the year 1957 with the release of Tudor's first generation of alarm watches. Bands of alligator leather and silver and cognac colored dials underscore the classic feel of current models. For a more sporty look, there is also a three-piece link Oyster bracelet available. Each complete set comes with an additional textile band.

Tudor opted for the 2892 movement as the technical base for the Heritage Advisor and equipped it with an alarm complication developed in-house. A skinny red hand with an arrow-shaped tip shows the time for the alarm. A display with the words "ON" and "OFF" is located at 9 o'clock and lets you know if the alarm function is switched on or off. On the opposite side at 3 o'clock, a small disc shows the alarm's power reserve. The alarm function is supplied with energy and set to the desired time using the crown with an Advisor inscription at 2 o'clock. The second crown at 4 o'clock features the Tudor rose and is used to wind the movement and set the time. A push button on the other side of the case at 8 o'clock is used to turn the alarm on or off. The date is displayed on a subdial with a small hand at 6 o'clock.

This 42-mm timepiece made of stainless steel and titanium costs about 4,300 euros in mint condition. With some luck, you may find a vintage model from the early years – for example, with the reference number 1537 – for around 3,300 euros.