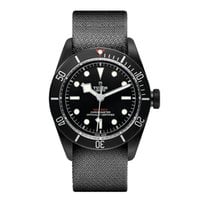 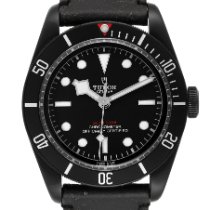 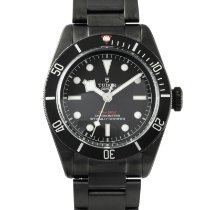 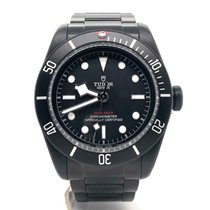 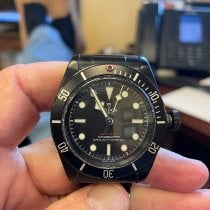 The Black Bay Dark is unlike any other timepiece in the Tudor Black Bay collection. This diving watch features matte black PVD coating on both its case and metal bracelet, lending it a particularly reserved and sleek appearance.

The diving watches in the Tudor Black Bay collection have been bestsellers ever since they were first released in 2012. In 2016, the Swiss manufacturer released an especially interesting model: the Black Bay Dark.

The main differences between the 41-mm Dark and its stainless steel counterparts are its matte black PVD coating and domed matte black dial with contrasting white hands, indices, and numerals. Tudor outfits the PVD-coated bezel with a black anodized aluminum inlay, which is stamped with a white diving scale. The only pops of color come from the red depth rating on the dial and the bezel's red triangle at 12 o'clock.

Beyond that, the Black Bay Dark boasts everything that makes the stainless steel versions so popular: domed sapphire crystal, water resistance to 200 m (20 bar, 656 ft), an oversized crown, and distinctive snowflake hands. Like most three-hand Black Bay models produced since 2015, its power comes from the in-house MT5602 caliber. This movement is a COSC-certified chronometer and has an impressive 70-hour power reserve. Tudor's engineers designed this movement without a date display – to the delight of many watch purists.

New Zealand's national rugby team, the All Blacks, have been faithful Black Bay Dark wearers since its debut. In 2019, Tudor introduced a special-edition Black Bay Chrono Dark in honor of the legendary team. This model takes the beloved diving watch and adds a chronograph function as well as design elements from the Prince Oysterdate Chrono from the 1970s.

About the Black Bay Dark

The matte black Black Bay Dark exudes its own unique charm. It is equal parts refined and reserved and, despite being a tool watch, looks as good paired with a T-shirt and jeans as it does with business attire.

The Black Bay Dark ref. M79230DK-0008 features PVD coating not only on its case but also on its three-piece link stainless steel bracelet. The final result bears a strong resemblance to timepieces worn by special forces units. If you're interested in this variant of the Black Bay Dark, be sure to have between 3,400 and 3,600 USD on hand, depending on its condition.

Tudor offers two more Black Bay Dark models in addition to the version on a stainless steel bracelet. The first, the ref. M79230DK-0007, is mounted on a distressed black leather strap with a black PVD-coated folding clasp. As a result, this edition looks more elegant and less rigid. You can call this timepiece your own for about 3,500 USD new. Well-maintained watches change hands for roughly 3,000 USD.

The sportiest member of the Black Bay Dark family is the ref. M79230DK-0006. Tudor pairs this model with an anthracite-colored textile strap. Its clasp also features black PVD coating. Prices for a mint-condition timepiece sit around 3,600 USD, while used watches demand some 3,000 USD.

A Chronograph for the All Blacks

The All Blacks Special Edition with a ChronographIn 2019, Tudor released a "Dark" version of Black Bay Chrono. To date, Tudor has produced 1,181 copies of this special edition. As its name implies, this Black Bay, the ref. M79360DK-0001, features a chronograph function. Tudor's designers took inspiration from the Prince Oysterdate Chrono – a popular 1970s model – when crafting this watch. The pushers, stationary tachymeter bezel, two-subdial layout, and date window at 6 o'clock all come from the vintage predecessor. However, thanks to its case shape, sapphire crystal, dial design, and snowflake hands, there's no mistaking this timepiece for anything other than a Black Bay.

The matte black Black Bay Chrono Dark is dedicated to New Zealand's national rugby team, the All Blacks. While it may seem like a random number at first, the limited production run of 1,181 pieces actually corresponds to the number of players who have been called up to join the All Blacks since the team's foundation. As new players make their debuts, Tudor will produce more timepieces.

What exactly is PVD coating?

Tudor uses a PVD coating process to give the Black Bay Dark its signature hue. The abbreviation PVD stands for "Physical Vapor Deposition," a three-step process based on technology developed by NASA for their space missions. Without getting too technical, it involves taking a solid source material, turning it into gas, and then reverting it to a solid so it sticks to the metal surface. This layer of inorganic material protects the metal beneath and improves its overall strength.