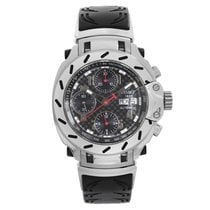 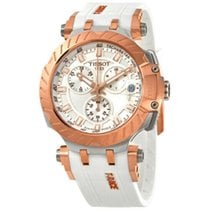 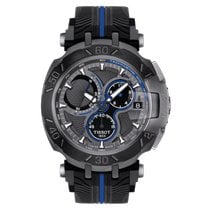 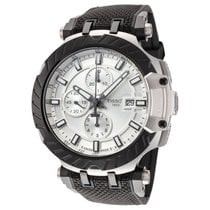 The chronographs in the T-Race collection stand out with their dynamic motorcycle-inspired designs. This inspiration shines through in the watches' brake disk-style bezels and date magnifiers. Precise quartz movements power these timepieces.

Since 2001, Tissot has been the official timekeeper for the MotoGP, the premier class in the motorcycle racing world championship of the same name. The T-Race series from the T-Sport collection is dedicated to this race. While creating this collection of sporty chronographs, the designers were inspired by motorcycle racing. Bezels resembling brake disks and subdials similar to a bike's handlebars give the T-Race its dynamic look. Incredibly precise quartz movements tick away inside most of the watches in this collection, which only deviate from the correct time a few seconds each month. Mechanical watches usually deviate from the exact time a few seconds every day. A limited edition model is powered by a mechanical chronograph caliber with a 45-hour power reserve, the ETA C01.211. A rotor winds the spring while the watch is being worn.

Tissot's T-Race is a striking sport watch that is perfect for a ride on your motorcycle. So, if you're searching for a robust watch for the race track, then this chronograph is the perfect choice. However, it's trendy off the asphalt, too. Whether you're at the beach or in the city, you'll be turning heads with the T-Race. Used quartz models cost less than 500 euros, and the new models aren't much more expensive. Versions with automatic calibers cost between 500 and 1,000 euros. The models from Casio's Edifice collection are comparable to the T-Race in terms of both design and functionality. The Japanese watches are a bit less expensive, costing only a few hundred euros.

The T-Race's look is markedly sporty. Dynamic luminous color accents transform the watches into real eye-catchers. The chronographs are recognizable by the date magnifier at three o'clock and the bulge above the crown resembling a brake pad. Fittingly, the bezel also resembles a brake disk. The three chronograph counters resemble a motorcycle's cockpit instruments and serve as the small seconds dial (six o'clock), 30-minute counter (ten o'clock), and 10-hour counter (two o'clock). Both push-pieces for starting, stopping, and resetting the chronograph to zero are located on the outer side of the case at one and four o'clock.

The lugs for attaching the rubber strap resemble the rear suspension of a motorcycle. The strap comes in black, orange, yellow, and red. The special editions have two-tone straps with luminous vertical stripes. Black dominates the dial selection, though some models are also available with a silver dial. For the hour markers, Tissot utilizes both indices and Arabic numerals. Thanks to the luminous hands, you can also read the time at night.

One model is available in all black, with a case made of coated stainless steel and a matte finish. The indices and numerals are also black, and the date display with a white background brings contrast to the dial. The hour and minute counters are highlighted by their gray borders.

The T-Race collection encompasses special editions, too: The watches are dedicated to famous motorcycle racers. One model is named after the American racer Nicky Hayden. Hayden won the 2006 MotoGP, solidifying him as the world champion. The watch with reference number T0924172705703 is all-American in red, white, and blue, with a blue and white striped strap. The blue dial features three red numerals: 12, 4, and 8. The minute and hour subdials are white and have red stick indices as well as hands. The bottom half of the dial has a camouflage pattern, reflecting Hayden's racing outfit. His star emblem is located at six o'clock, and Tissot engraved Hayden's number, 69, on the case back. Even his number is patriotic with its American flag decoration. This model is limited to 4,999 copies.

The top models in the T-Race collection are the MotoGP Limited Edition watches. Tissot creates new versions of these watches each year, and they're powered by either quartz or automatic calibers. The mechanical versions are powered by the caliber C01.211, which is manufactured by the ébauche manufacturer ETA, also a member of the Swatch Group. The C01.211 is unique in that it has components made of plastic, making it cheaper, lightweight, and anti-magnetic, as well as eliminating the need for lots of lubrication. Its power reserve is 45 hours. The small seconds is located at nine o'clock, the 30-minute counter at twelve, and the 6-hour counter at six, leaving plenty of space for the date display at three o'clock.

The design of the MotoGP watch is typical of the T-Race collection. Red color accents stand out in contrast to the otherwise black features. Its rubber strap has red stripes and the back side of the strap resembles a tire tread. The carbon effect dial is also reminiscent of motorcycle technology, and the watch's sapphire glass is particularly scratch resistant and offers a clear view of the hands and dial. The see-through case back is styled after a motorcycle rim and allows you to watch the movement in motion. Tissot's motorcycle inspiration didn't stop with the watch, however. Even the box stays true to the theme: This limited edition watch of only 3,333 copies comes delivered in a small motorcycle helmet.

The Japanese manufacturer Casio offers comparable chronographs to the T-Race. The Edifice collection models stand out thanks to their sporty designs, functionality, and affordable prices. A highlight in this series is Bluetooth technology, allowing you to connect your watch and smartphone. It only takes a split second for the watches to set themselves to the correct local time, which is especially practical if you travel often. Environmentally-friendly solar energy powers the watch and the rechargeable battery saves the extra energy, thereby eliminating the need for battery replacement. Bluetooth-enabled Casios are available for around 300 to 400 euros. The Edifice Classic Collection models are even more affordable, with the most basic stainless steel versions costing around 100 euros.