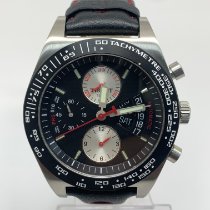 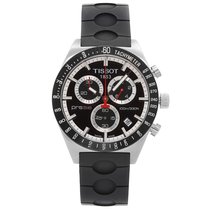 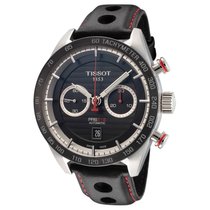 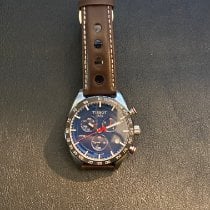 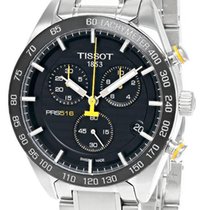 The PRS 516 is Tissot's retro watch from their T-Sport collection. It features either a leather or stainless steel band with large holes to improve breathability, as well as a power reserve of up to 80 hours thanks to its superior caliber technology.

The origins of the PRS 516 from Tissot date back to the 1960s. The Carrera from TAG Heuer was introduced in 1963 and has since become an iconic piece in the world of watches. The Tissot's design is easily recognizable as having roots in the 1960s. Its most striking feature is its leather or stainless steel band with large holes, reminiscent of racing gloves. The auto racing parallels don't stop there: The see-through case back of some models resembles a steering wheel with three spokes. The PRS 516 is available as a three-hand model or as a chronograph. Countless different three-hand models display the date at the three o'clock position, along with the day of the week. A Swiss automatic or quartz caliber powers every PRS 516, giving chronographs a power reserve of 60 hours and three-hand watches one of 80 hours.

If you're looking for a Swiss timepiece at an affordable price, then the PRS 516 is the right watch for you. Used watches with quartz movements are available for under 500 euros. A three-hand model with an automatic caliber costs around 500 euros, while the automatic chronographs cost around 1,000 euros. Chronographs from Certina's DS Podium series are in the same price range, although they have a more modern feel. Certina also belongs to the Swatch Group.

An Alternative: The Mido Commander II

A mechanical watch with a power reserve of 80 hours is an impressive feat, especially in this price range. The three-hand Mido Commander II has a more formal design and goes well with an office suit. The stainless steel watch is available with a steel or leather band. The dials are available in anthracite, dark blue, and silver, and the date and day of the week are displayed at the three o'clock position. The watch also has a power reserve of 80 hours and is certified by the Official Swiss Chronometer Testing Institute (COSC), which confirms the watch's high accuracy with a maximum deviation of -4 to +6 seconds a day. Like Tissot, Mido is a member of the Swatch Group. A Mido chronometer is also comparable in price, costing around 1,000 euros.

The PRS 516's design was inspired by the race track. Tachymetric scales on the chronographs' bezels, rally bands, and push-pieces resembling engine cylinders all point to the watch's origins. Compared to its thoroughly modern siblings, the PRS 516 is the T-Sport collection's retro watch. The watch's angular case resembles those from the 1960s, and the versions with two-tone dials are also similar to the PR 516. The dials are black or dark blue with a silver ring around them, though the contrast is barely noticeable. Along with luminous hour and minute hands, luminous stick indices mark the hours so that the wearer can read the watch in the dark. The T-shaped, red central seconds hand brings some color to the dial and is a Tissot trademark.

The watches have a thoroughly modern size: three-hand models are 42 mm in diameter, while the chronographs are 45 mm, making them well-suited for larger wrists. Since 2015, the watches with a stopwatch function feature ceramic bezels, making them especially scratchproof. Furthermore, the case is less angular, and its thin indices appear to float over the dial with the hands ticking beneath them, creating a 3D effect. The largest change, however, is the chronograph's new movement. Tissot replaced the Valjoux 7750 with 30-minute and 12-hour counters with the ETA A05.H31 automatic caliber with a chronograph function. This changed the face of the watch: Three subdials were merged into two at nine and three o'clock, with the date display now at six o'clock.

Like the Swiss ébauche manufacturer ETA, Tissot belongs to the Swatch Group. Tissot's most recent models all feature calibers from their sister company. In the PRS 516 series, they use the automatic movement ETA 2836-2 for the three-hand models. The caliber has a stop-seconds mechanism with which you can set the time to the exact second. The date and day of the week are displayed at three o'clock and both can be changed quickly. The balance wheel frequency is 28,800 alternations an hour (A/h). Seeing as it's a self-winding movement, the spring gets its energy from wearer's natural arm movements while being worn, and thus winding by hand is not necessary. Newer models have an optimized caliber with an 80-hour power reserve. Such impressive power reserves are normally only available at much higher prices.

Until 2015, Tissot used the Valjoux 7750 movement in this series' mechanical chronographs. The caliber is one of the most successful automatic chronograph calibers in the world. The rotor winds the mainspring from one side and creates a power reserve of 40 hours when fully wound. Like the ETA 2836-2 caliber, the movement displays the date and day of the week at three o'clock. The small seconds is located at nine o'clock, the 30-minute counter at twelve, and the 12-hour counter at six. Because this caliber has a frequency of 28,800 A/H (4 Hz), you can measure time to 1/8th of a second. This movement also features a balance stop.

The ETA A05.H31 caliber, further developed from the Valjoux 7750, powers the newer models. Unlike the classic chronograph movements, this caliber has two subdials: a small seconds at nine o'clock and a 30-minute counter at three o'clock. The date display is located at the six o'clock position. An advantage of this new movement is its 60-hour power reserve - meaning you can take your watch off Friday night and put it back on Monday morning without a hassle.