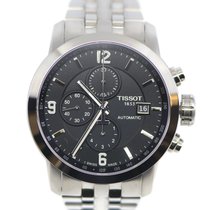 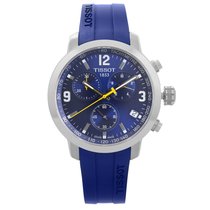 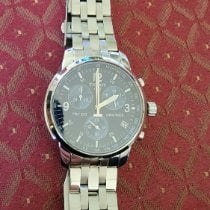 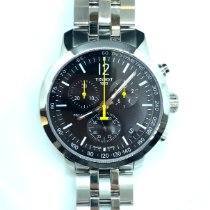 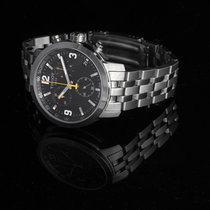 Tissot T-Sport PRC 200: Dive in with This All-Purpose Watch

Tissot's PRC 200 collection features over 40 different incredibly versatile models ranging from classic to sporty. Whichever you pick, it is a watch that adds a touch of elegance to an everyday timepiece. These watches are waterproof to 200 m.

Tissot offers around 40 different watches in their PRC 200 series from the T-Sport collection. Although they're sporty watches, their design remains rather conservative. The Switzerland-based company has been producing watches since 1853, making them one of the oldest watch manufacturers. In 1930, Tissot joined forces with Omega, although both brands remained independent. The PRC 200 is available as a simple three-hand watch with day and date display as well as a chronograph with a stopwatch function. The mechanical Powermatic 80 caliber powers some models and has an impressive power reserve of more than three days. The men's watches vary in size, ranging from 39 to 44 mm depending on the model. Women's models have a smaller diameter of 35 mm. The cases used in this series are all made of stainless steel. Tissot conceived the idea for the PRC 200 after the success of the PRS 200, a watch that is slightly more geared towards diving. Both watches are waterproof to 200 m (20 bar).

If you're looking for a sturdy, affordable everyday watch with a classic look, then you should consider the PRC 200. The first two letters of its name stand for "particularly robust," which should give you an idea about what kind of watch it is. The watch is also especially waterproof, as it can be taken to 200 m (20 bar) and used as a diving watch without any issues. However, it doesn't look like your typical diving watch: For example, it doesn't have a rotating bezel with a numbered scale. This type of bezel is a distinguishing characteristic of diving watches like the Tissot Seastar 1000.

You have the choice between mechanical and quartz calibers when it comes to both chronographs and three-hand watches. The simplest introductory quartz models cost a little over 300 euros. Battery-powered chronographs are about 400 euros. The mechanical versions of the PRC 200 start at around 600 euros, while the most expensive chronographs with automatic calibers cost around 1,000 euros.

The Japanese manufacturer Citizen offers comparable watches in the quartz segment, especially in their Sports and Elegant collections. Citizen predominantly uses solar power instead of batteries, and their watches are less expensive, though they are not waterproof to 200 m (20 bar) like the PRC 200. It's difficult to find a mechanical watch with a classic, sporty design that can dive to a depth of 200 m. TAG Heuer offers many watches in a similar style in their Carrera collection, all of which are waterproof to 100 m (10 bar) and run in the four-figure range.

The movements used in the PRC 200 are produced by the largest ébauche manufacturer in the world, ETA. Like Tissot, they are also a member of the Swatch Group. The ETA SA Manufacture Horlogère Suisse (ETA SA Swiss Watch Manufacturer) has existed since 1793 and supplies numerous famous manufacturers with calibers.

One of the most remarkable movements powering the watches in the PRC 200 series is the mechanical Powermatic 80.141. ETA introduced this automatic caliber in 2013 under the designation C07.111. Aside from Tissot, manufacturers such as Hamilton and Certina use it as well. A decisive advantage of this movement is its impressive power reserve of 80 hours. Normally, the power reserves of automatic calibers range from 40 to 50 hours. In order to achieve longer power reserves, a second barrel usually needs to be added. However, this isn't the case with the C07.111. Instead, Tissot optimized the reliable caliber 2824-2. The frequency was reduced from 28,800 to 21,600 alternations per hour (A/h) in order to lower the amount of energy used by the balance wheel. Components with low friction also contributed to this. Furthermore, a new type of mainspring was utilized which can withstand more pressure. All of these alterations have resulted in a power reserve which can last an entire weekend. Take your watch off on Friday and put it back on Monday morning still ticking.

The mechanical chronographs are powered by the ETA C01.211 movement. The caliber, introduced in 2009, utilizes thermoformed plastic for the escapement, making it self-lubricating and anti-magnetic. The C01.211 is based on the Lemania 5100 caliber which has been produced since the late 1970s and is often used in military watches.

With a quartz PRC 200, you get the best value for your money. In the battery-powered chronographs, the ETA G10.211 deviates from the correct time by only a few seconds a month. The timing function enables you to precisely time 1/10ths of a second with a special subdial at two o'clock. The characteristically large T-shaped second hand keeps track of timed seconds up to 60, similar to most chronographs. The 30-minute counter keeps track of timed minutes and is located at ten o'clock. The decentralized seconds is located at six o'clock. The G15.211 caliber in the 35-mm women's chronographs has a similar layout. The ETA Trendline F06.111 powers the simple three-hand watches. Thanks to a high-performance battery with a capacity of 55 mAh, you don't need to change the battery for eight years.