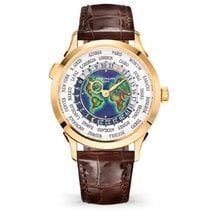 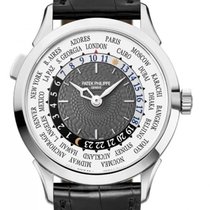 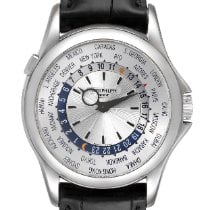 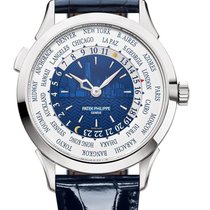 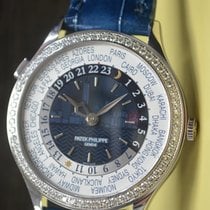 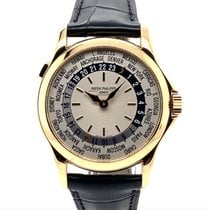 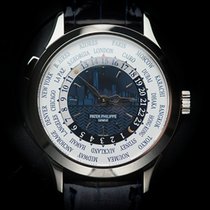 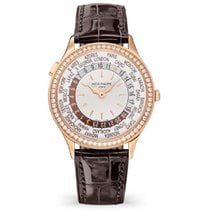 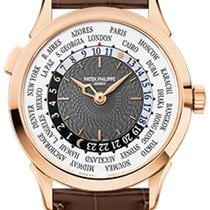 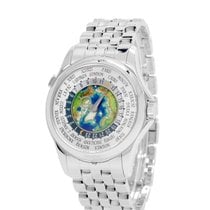 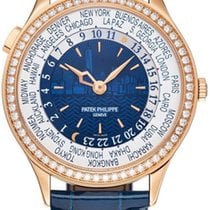 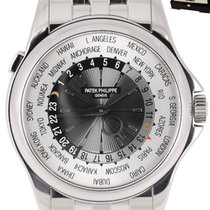 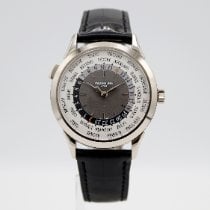 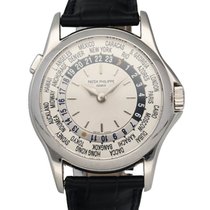 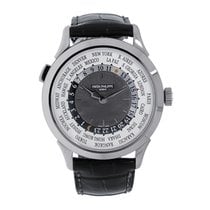 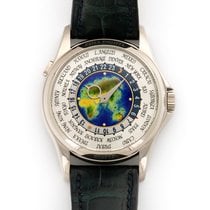 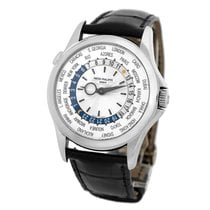 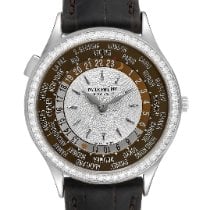 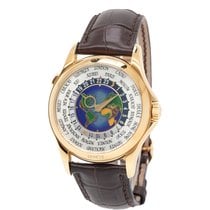 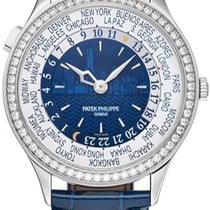 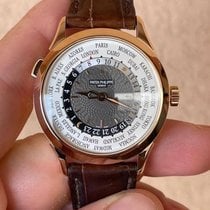 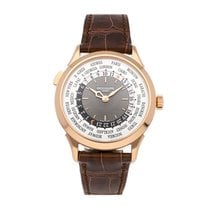 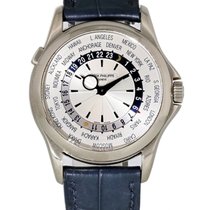 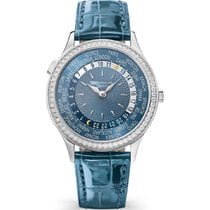 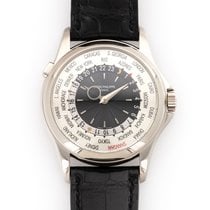 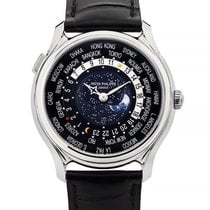 The Patek Philippe World Time displays 24 time zones at a glance, all of which can be controlled with the push of a button. Precise in-house calibers and gold and platinum cases make these models both a reliable travel companion and an investment.

5 Reasons to Buy a World Time

24 Time Zones at a Glance

With the World Time, travelers always know what time it is both where they are and everywhere else in the world. This feature has transformed the World Time into a cult watch among wealthy globetrotters.

Unlike watches like the Rolex GMT-Master II, this Patek Philippe world time watch lacks an additional hour hand. A secondary hour hand makes one full revolution per day and requires a 24-hour scale around the edge of the dial. However, this common feature can only display a second time zone and not multiple time zones at once.

The World Time, on the other hand, displays the 24 most important time zones in the world simultaneously. This is made possible by two rotating rings that form the edge of the dial. The inner ring has a 24-hour scale, while the outermost ring has city names representing each time zone.

Patek Philippe crafts the cases – ranging from 36 to 40.2 mm in diameter – out of yellow, rose, or white gold. Some models even use platinum. What's more, the bezel of the women's model is adorned with 62 diamonds.

How much does a Patek Philippe World Time cost?

Are you looking for a luxury watch designed to be the ideal travel companion? The World Time from Patek Philippe is exactly what you need. This elegant dress watch displays the time not only in your current location but also in 24 different time zones around the world.

The reference number 5110 is the most affordable of the World Time watches. This series was introduced in 2000 and features timepieces measuring 37 mm in diameter. Plan to spend around 26,600 USD for a white gold watch in very good condition. Variants in rose gold or platinum cost a bit more, ranging from 32,400 to 34,700 USD.

When buying an older World Time watch, you should be careful to note whether the time zones are still accurate, as some have changed. The time difference between Moscow and Greenwich Mean Time (GMT) is now only three hours, but it used to be four. Additionally, some city names on the city ring have changed. Dubai has replaced Riyadh, for example.

The current version of the World Time bears the reference number 5230. Its case comes in white or rose gold and measures 38.5 mm in diameter. Its design has also been slightly altered from that of its predecessors, including the use of "winglet" lugs and the absence of a crown protector. These watches sell for around 35,800 USD. Expect to pay an additional 11,600 USD for a 36-mm women's model (ref. 7130) with a diamond-studded bezel.

If you'd like a stopwatch in addition to the multiple time zone display, you should take a look at the reference number 5930. This World Time chronograph costs about 64,700 USD.

The ref. 5531R joined the Patek Philippe catalog in 2018. Here the luxury watch manufacturer has combined a world time watch with a minute repeater. A patented mechanism makes sure the chimes always relay the current local time. This 40.2-mm watch is also finely decorated. The sides have been guilloched by hand in a "Clous de Paris" pattern, the lugs are skeletonized, and the center of the dial features an enamel representation of the Lavaux vineyard on the shores of Lake Geneva. However, all this luxury comes at a price, namely 578,000 USD.

How the World Time Works

Patek Philippe has a long tradition of creating world time watches. The Genevan manufacturer first brought this complication to market all the way back in the 1930s. At that time, Patek used a design from Louis Cottier, an independent watchmaker. He came up with the idea of using a central hand and two counterclockwise-rotating rings. The inner ring has a 24-hour scale, while the outer ring features 24 city names, each representing a different time zone.

The 24-hour ring displays the local time at the 12 o'clock position, while the city ring displays the name of an important city in the respective time zone above. London, New York, Moscow, Bangkok, Tokyo, and Sydney are all featured on the ring, as are the Azores in the Atlantic and the Marshall Islands in the Pacific.

If it's 10 AM in London, the World Time's rings show that it's 12 PM in Cairo, already 6 PM in Hong Kong, but only 7 AM in Buenos Aires. The 24-hour scale is colored light blue between 7 AM and 6 PM and dark blue from 7 PM to 6 AM, so that the wearer can more easily distinguish between day and night. A sun at 12 PM and a moon at 12 AM make the display even clearer.

The World Time shows off its greatest strength when you're on the road; you can quickly set the current local time using a push-piece at 10 o'clock. The hour hand moves ahead an hour every time you press it, and the city and 24-hour rings move a step back, counterclockwise. The wearer pushes the push-piece until the proper city and time are displayed on the rings at 12 o'clock. Patek Philippe is the only brand to offer this method of setting the time, where one push-piece controls both the hour hand and both rings.

The automatic mechanical caliber 240 HU powers the World Time watches. It has a 48-hour power reserve and a decentralized 22-karat gold mini-rotor.

Patek Philippe indicates that the movement deviates between -3 and +2 seconds a day; thus, it easily qualifies as a chronometer. The movement vibrates at 21,600 A/h, equivalent to 3 Hz. The 240 HU has 33 rubies as well as eight bridges, and consists of a total 239 pieces. You can watch the movement in action through the watch's sapphire glass case back.

Independent Since the 19th Century

Patek and Philippe traveled to the Great Exhibition in London in 1851. There, Queen Victoria bought two watches. The royal houses of Denmark and Italy joined their clientele soon thereafter. The New York jeweler Tiffany & Co. then ordered 130 watches. The first Patek Philippe wristwatch was made in 1868, and they received a patent for the first double chronograph in 1902. In 1925, they introduced the first wristwatch with a perpetual calendar, another of their many patents.

Brothers Jean and Charles Henri Stern began running the company in 1932. Previously, the Sterns had produced dials exclusively for Patek Philippe. After his father stepped down in 2009, Thierry Stern took over the company. Every year, around 50,000 watches leave the Patek Philippe production facilities in Geneva. Patek Philippe, like Rolex, is one of the few remaining independent luxury watch manufacturers.