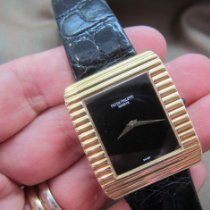 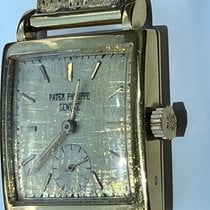 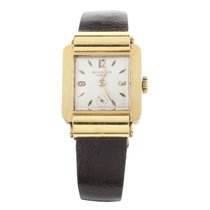 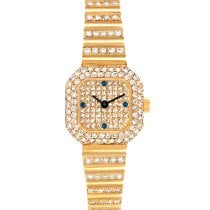 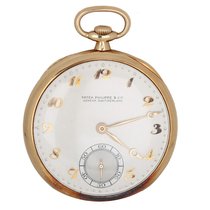 Thanks to its long history, Patek Philippe is well represented on the vintage watch market. The selection is diverse, ranging from entry-level models to rare collector's items. Their exceptional quality makes these watches a sound investment.

5 Reasons to Buy a Vintage Patek

Patek Philippe has been producing top-quality timepieces since 1851. Very few manufacturers have managed to maintain such a lasting reputation. Many vintage Patek watches are still in excellent condition after several decades. Watches from this Swiss brand come with a promise of longevity and stable value.

Therefore, watches that are no longer produced by Patek Philippe are still in demand. The Geneva-based manufacturer prefers to use solid gold for their timepieces. If you're searching for a vintage watch that will maintain its value, those from Patek Philippe are a good place to look. Watches from this manufacturer aren't just timepieces or status symbols; they're also relatively stable investments.

The stability of Patek watches is due in part to their classic designs. Older watches are highly sought after if they have subtle design features not influenced by fashion trends. The logic is: If a watch from 50 or 60 years ago is considered just as classy and attractive today as it was back then, it will probably remain that way over the coming decades.

How much does a vintage Patek Philippe watch cost?

The Calatrava has an excellent reputation and is considered the symbol of the company. As Patek Philippe has been producing it since 1932, many vintage models are also available. The Calatrava's design was strongly influenced by the Bauhaus movement , which focused on stripping down design just to the essentials. Most Calatravas feature dauphine hands, line indices, and a small seconds dial at 6 o'clock. However, there are also models with a central second hand and numerals on the dial.

The original Calatrava bore the reference number 96 and was part of the manufacturer's catalog from 1932 until the 1970s. It was the first watch in company history to include an in-house caliber, namely the manual caliber 12-200. While its 31-mm gold case has always been on the smaller side, today it makes the perfect women's watch. You can find well-maintained pieces for around 10,500 USD. If you prefer larger watches, you should look at the reference numbers 565 and 570 from the 1930s. These timepieces are almost 36 mm in diameter but are otherwise almost identical to the ref. 96. Prices for models in good condition sit around 36,200 USD.

The reference numbers 1585 and 2526 are another pair of interesting vintage Calatrava models. The 1585 was first introduced in the 40s. Its lugs are shaped like rolls of parchment, making the watch seem much larger than its sister models. Plan to spend around 12,800 USD for a timepiece in very good condition. The 2526 is particularly special because it was the first Calatrava to feature an automatic movement (12-600AT). A yellow gold model from the mid-50s demands about 51,900 USD in good condition.

Patek Philippe added a chronograph to the Calatrava collection in the 40s under the ref. 533. This 33-mm gold watch has a small seconds dial at 9 and a minute counter at 3 o'clock. It also comes with a tachymeter scale around the edge of the dial. This collector's item sells for a solid 73,400 USD.

Tonneau and Ellipse: An Affordable Entry into the World of Patek Philippe

There is a large number of uniquely shaped watches in the Patek Philippe vintage market, ranging from barrel-shaped to square and rectangular to elliptical. Many of these watches reveal the brand's continuity. Certain designs have remained the same over decades with only minute changes. Some even still appear in the current Gondolo collection.

The vintage market represents a relatively affordable entry point into the world of Patek Philippe . There are many, many watches available for under 12,000 USD. If you're on the search for especially old wristwatches, then look for the Top Hat series.

This rectangular watch dates back to before 1950. It includes the manual caliber 9-90 and a small seconds dial at 6 o'clock. Its name comes from its shape, which bears a slight resemblance to the cylindrical headwear. Be prepared to spend around 10,100 USD for a gold Top Hat. The platinum version with diamond indices can cost a few thousand more.

Rectangular cases are a common feature among vintage Patek Philippe watches. A large portion of these watches come from the 40s and share some features with the Cartier Tank. Prices for these largely yellow gold timepieces sit between 12,800 and 17,500 USD. Models from the 70s and 80s were more heavily influenced by trends at those times and, therefore, can be found for under 3,500 USD.

Pillow-shaped watches were all the rage at Patek in the 60s. Some examples include the ref. 3525 and the ref. 3527. The 3525 has a more classic feel thanks to its round dial and almost square case. Its sister model, however, truly reflects 60s fashion. Its dial has the same pillow-like shape as the case and is a bit wider than it is tall. The differences between the two models go deeper than just looks alone. An automatic caliber powers the 3525, while a manual caliber ticks away inside the 3527. Depending on their condition, these watches sell for between 8,200 and 10,400 USD.

The Nautilus is a relatively young series by Patek standards. Despite that, this collection has long enjoyed its cult status and plays a sizable role in the vintage market. Models with the ref. 3700 from the 70s are particularly highly coveted. These watches feature the automatic caliber 28-255 C, which is based on the legendary caliber 920 from Jaeger-LeCoultre. Set aside around 80,400 USD for a well-maintained timepiece in stainless steel. Those in yellow gold with diamonds can easily cost upward of 117,000 USD.

Models from the 1980s with the reference number 3800 represent an affordable alternative. At 38 mm, these are a bit smaller than their 42-mm predecessor. Their movement, the 335 SC, is also different. Plan to spend between 23,300 and 26,800 USD for one of these timepieces. You can save even more by purchasing a women's model from the same era. These quartz-powered watches change hands for around 9,300 USD.

Pocket watches from Patek Philippe are evocative of the past and possess the charm of times gone by. Since the design of Patek pocket watches hasn't changed much in over 100 years, the line between vintage and retro watches is rather blurry. You can purchase a yellow gold pocket watch in good to very good condition for around 5,800 USD. However, prices for rarer models can easily climb into the five-figure range.

Patek Philippe's Founders and Their Patents

Patek Philippe was founded in 1851. Antoni Patek (1811-1877), a Polish exile, began working with his colleague, Frenchman Adrien Philippe (1815-1894), in Geneva in 1845. The year prior, Philippe had revolutionized the watch world with his invention of the crown used for winding and setting a pocket watch. Before that, a key was always required to give the movement more power.

Patek and Philippe traveled to the Great Exhibition in London in 1851 and gained a prominent client: Queen Victoria, who bought two watches – an important sale for the fledgling business. Other members of European nobility quickly became regular customers. There were even overseas orders: Tiffany & Co. ordered 130 watches to sell in the United States. Patek Philippe acquired many patents in the following years, such as a patent for the first double chronograph in 1902. In 1925, the company introduced the first wristwatch with a perpetual calendar.

Brothers Jean and Charles Henri Stern already had a business relationship with Patek Philippe as dial suppliers before they bought the company in 1932. Since then, Patek has belonged to the Stern family. Thierry Stern has been running the company since 2009. Every year, Patek Philippe produces around 50,000 watches. Aside from Rolex, it's one of the few independent luxury watch manufacturers left today.