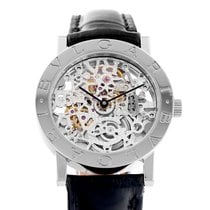 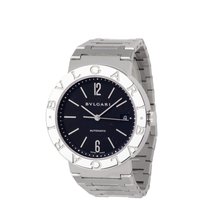 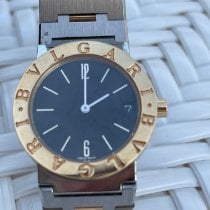 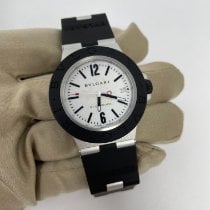 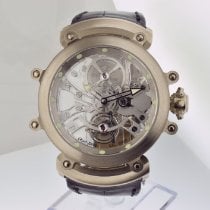 The Bvlgari Bvlgari collection debuted in 1977. Each watch features a bezel with a double Bvlgari inscription in the classic Latin alphabet. Top models come with a tourbillon, diamonds, or a rose gold case and mother-of-pearl dial.

5 Reasons to Buy a Bvlgari Bvlgari

Bvlgari Bvlgari: A Journey Through Time

Italian luxury goods manufacturer Bvlgari introduced the Bvlgari Bvlgari collection in the late 1970s. At the time, international celebrities were flocking to Bvlgari's flagship shop on Rome's Via Condotti, bolstering Bvglari's global reputation. This new collection spoke to the confident, successful women of the era. As a result of its success, the company expanded the jewelry line globally.

The current Bvlgari Bvlgari collection contains women's watches ranging from 23 to 37 mm in diameter, as well as men's watches like the ref. 102977. There are many classic three-hand pieces, as well as more complicated models, including the extremely rare ref. 102034 with a tourbillon. This yellow gold timepiece sells for around 82,500 USD, making it one of the collection's most expensive watches.

How much does the Bvlgari Bvlgari cost?

The two-tone ref. 102157 is a stainless steel watch with a rose gold bezel and crown. Its bracelet also features rose gold middle links. An automatic Bvlgari caliber ticks away inside the 33-mm case. There are central hands for the hours, minutes, and seconds, which are also in rose gold. Twelve diamonds serve as hour indices on the brown sunburst dial. The final watch is water-resistant to 30 m (3 bar, 98 ft), so you can keep it on while washing your hands. Prices for this model range from 5,200 to 7,100 USD.

Features of the Bvlgari Bvlgari 102157

The Bvlgari Bvlgari ref. 102721 is an automatic women's watch. Its stainless steel case is 33 mm in diameter and water-resistant to 30 m (3 bar, 98 ft). Unlike most Bvlgari Bvlgari models, its bezel is studded with small, brilliant-cut diamonds. The mother-of-pearl dial also features diamond hour indices. A pink cabochon-cut stone sits atop the stainless steel crown. There are central hands for the hours, minutes, and seconds. Bvlgari mounts this timepiece on a blue alligator leather strap with a folding clasp. You can call this watch your own for around 11,000 USD new and 8,200 USD pre-owned.

Features of the Bvlgari Bvlgari 102721

The 41-mm Bvlgari Bvlgari Solotempo ref. 102977 has a bronze case and is water-resistant to 50 m (5 bar, 164 ft). The Bvlgari caliber BVL 191 powers this timepiece. The movement is decorated with Geneva Stripes, chamfering, and a snailed finish. Central hands display the hours, minutes, and seconds. There's also a date display at 3 o'clock. The black dial features Arabic numerals at 6 and 12 o'clock, while the other hours are marked using line indices. Sapphire crystal sits within the black case back, offering a view of the movement at work. A brown leather strap with a pin buckle clasp holds the timepiece securely on the wrist. This model sells for about 4,300 USD on Chrono24. Bvlgari lists the same watch on its website for 5,600 USD.

Features of the Bvlgari Bvlgari Solotempo

Prices for the Bvlgari Bvlgari 101976

The Bvlgari Bvlgari ref. 101976 is a simple three-hand women's watch. Its stainless steel case is 37 mm in diameter and water-resistant to 30 m (3 bar, 98 ft). The white mother-of-pearl dial features line indices for every hour except 6 and 12 o'clock, which are indicated by Arabic numerals. A date display sits at 4:30. The version on a stainless steel strap with a butterfly clasp has an official list price of 5,500 USD. However, you can get a mint-condition piece on Chrono24 for roughly 4,200 USD.

The top Bvlgari Bvlgari model bears the reference number 102034. Its 41-mm case is made of rose gold and contains the in-house caliber BVL 263. This automatic movement boasts a see-through tourbillon with a sapphire crystal bridge and a 64-hour power reserve. Rose gold hands and applied line indices stand out against the black dial. Like most watches in this collection, its bezel features the double Bvlgari inscription in the classic Latin alphabet. Bvlgari pairs the watch with a black alligator strap featuring a rose gold pin buckle clasp. This rare timepiece sells for around 82,500 USD.

The Bvlgari Bvlgari Tourbillon is also available in white gold. Apart from the material, the ref. 102212 is identical to its rose gold counterpart. This timepiece is also extremely rare and demands upwards of 77,000 USD.

Features of the Bvlgari Bvlgari Tourbillon

In 1884, Greek goldsmith Sotirios Voulgaris opened several jewelry and antique shops in Rome. He later founded a boutique known as the "Old Curiosity Shop" on the Via Condotti in 1905. Bvlgari still runs this boutique to this day. From 1910 to his passing in 1934, Voulgaris specialized in crafting Art Deco jewelry. The company's major international breakthrough came in the 1950s and 60s when the likes of Marlene Dietrich, Clark Gable, and Audrey Hepburn began wearing Bvlgari jewelry.

Bvlgari released pieces in a wide range of styles in the 1970s. Sources of inspiration included the pop art movement pioneered by Andy Warhol. Around the same time, the company established their first boutique outside of Italy. From the 1970s to the 2000s, they opened stores in Paris, Monte Carlo, New York, and Geneva. In 2001, Bvlgari began a collaboration with the Marriott and Ritz-Carlton hotel chains and now operates boutiques at select locations. Today, Bvlgari also runs their own hotels around the globe, including in Milan, Bali, and London. Luxury good conglomerate LVMH (Moët Hennessy – Louis Vuitton SE) acquired Bvlgari in 2010. Other LVMH brands include Zenith, Dior, TAG Heuer, and Hublot.