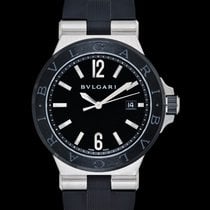 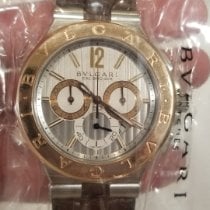 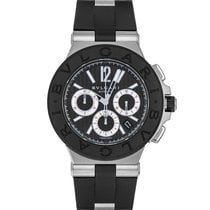 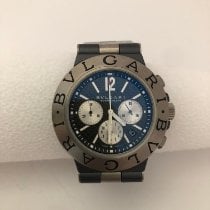 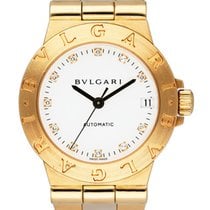 The Bvlgari Diagono collection combines innovative materials with a sporty and elegant design. It's home to a wide range of chronographs and three-hand watches with in-house calibers. Top models include the rose gold Scuba chronograph.

5 Reasons to Buy a Bvlgari Diagono

Watches with a Competitive Spirit

The name "Diagono" comes from the Ancient Greek word agon or "competition." Bvlgari released the first Diagono watch in 1994: the Scuba. This series stands out with its sporty yet sophisticated design. These robust watches give off a distinctly competitive feel and are geared toward a young and active audience. Some timepieces are even water-resistant to 300 m (30 bar, 984 ft). There are both three-hand and chronograph models available, all outfitted with in-house Bvlgari calibers.

In addition to impressive technology, this Italian luxury goods manufacturer doesn't shy away from unusual and innovative materials. For example, the case of the ref. 102427 is a combination of magnesium and PEEK (polyether ether ketone), an extremely light polymer. Both materials are also used in the aerospace industry. This high-tech watch sells for around 2,900 USD on Chrono24.

How much does the Bvlgari Diagono cost?

The Diagono Magnesium ref. 102427 DG41C6SMCVD has a 41-mm case made of magnesium and polyether ether ketone (or PEEK). This robust case can survive at depths of up to 300 m (30 m, 984 ft). The automatic Bvlgari caliber BVL 191 ticks away inside this timepiece. This movement has Geneva stripes and a 42-hour power reserve. There are central hands for the hours, minutes, and seconds, as well as a quick-set date at 3 o'clock. Arabic numerals mark the hours at 6 and 12 o'clock, with line indices representing the other hours. A black ceramic bezel encircles the white dial and features Bvlgari's trademark double inscription in the classical Latin alphabet. This specific model comes on a black rubber strap with a pin buckle clasp. You can purchase this watch for around 4,300 USD new and 2,900 USD pre-owned.

Features of the Bvlgari Magnesium

How much does the Diagono Chronograph 101987 cost?

How much does the Diagono Chronograph 101987 cost?

The automatic in-house caliber BVL 138 powers the ref. 101987, a rose gold chronograph. This movement provides the timepiece with its 60-hour power reserve and central hour, minute, and chronograph seconds hands. The black dial features three subdials: a smalls seconds at 3, a 30-minute counter at 6, and a 12-hour counter at 9 o'clock. There's also a date display at 4:30. Each hour is represented by an applied SuperLuminova line index, with the exception of 12 o'clock, which uses an Arabic numeral.

The 42-mm case is made of 18-karat rose gold and is water-resistant to 100 m (10 bar, 328 ft). Its stationary black ceramic bezel features the obligatory Bvlgari double inscription. Bvlgari mounts this watch on a black rubber strap with rose gold middle links. The strap is screwed into the case and comes with a pin buckle clasp, also in rose gold. This model costs about 10,500 USD in mint condition, while pre-owned pieces sell for roughly 9,400 USD.

Features of the Diagono Chronograph 102721

Bvlgari crafts the Diagono Chronograph with the reference number DG40C14SSDGMT out of solid stainless steel. Its 40-mm case has a depth rating of 100 m (10 bar, 328 ft). Inside, you'll find a Bvlgari movement with a GMT function. In addition to the central hour, minute, and second hands, there's also an extra GMT hand that points to a blue and gray scale around the dial's edge. A subdial at 6 o'clock serves as the date display. Applied line indices and the Arabic numeral "12" sit atop the gray dial. Thanks to a coating of luminous material, these markers glow in the dark. Like the other Diagono models, the stationary stainless steel bezel features the Bvlgari inscription in the classical Latin alphabet. This timepiece is worn on a stainless steel bracelet with a butterfly clasp. If you're interested in this Diagono, be prepared to spend some 5,600 USD.

Features of the Diagono GMT Chronograph

Prices for the Diagono Scuba DP41BSSSD

One of the collection's most famous models is the Diagono Scuba ref. DP41BSSSD. With 300 m (30 bar, 984 ft) of water resistance, this timepiece is a true diving watch and great choice for both professional and recreational divers. Both the 41-mm case and bracelet are made entirely of stainless steel. Bvlgari equips this timepiece with the in-house caliber BVL 191 Solotempo with a 42-hour power reserve. The black dial features ten dot indices, as well as Arabic numerals at 6 and 12 o'clock. Finally, this three-hand watch comes with a date display at 3 o'clock.

This Diagono Scuba comes on your choice of a stainless steel bracelet or rubber strap. The latter costs between 3,600 and 4,500 USD on Chrono24, depending on its condition. If you opt for the ref. DP41BSVSD on a rubber strap, be prepared to spend anywhere from 4,600 to 7,500 USD.

Features of the Bvlgari Diagono Scuba

The ref. DG42C6SPGLDCH combines a 42-mm stainless steel case with a bezel in 18-karat rose gold. As always, the bezel features Bvlgari's trademark inscription. Bvlgari outfits this chronograph with the automatic in-house caliber BVL 303. This movement lends this watch its 40-hour power reserve and central hour, minute, and chronograph seconds hands. There's also a date display at 4:30, as well as a small seconds at 3, 30-minute counter at 6, and 12-hour counter at 9 o'clock. An alligator leather strap with a stainless steel clasp holds this timepiece securely on the wrist. Never-worn versions demand about 10,000 USD. You can save a significant sum by purchasing a pre-owned model. These watches change hands for under 5,000 USD.

Features of the Bvlgari Diagono DG42C6SPGLDCH

What do Audrey Hepburn, Marlene Dietrich, and Clark Gable all have in common? In addition to being stars of the silver screen, these three actors were all big fans of the Italian luxury brand Bvlgari. Greek goldsmith Sotirios Vulgaris founded his business in 1884. The company began seeing increased success in 1905. Originally known as the "Old Curiosity Shop," Bvlgari still owns and runs a boutique at the original location in Rome's Via Condotti. Today, watch and jewelry fans the world over turn to Bvlgari for their fantastic creations.

Bvlgari specialized in Art Deco jewelry until 1934. In the 1950s and 60s, many famous actors and politicians helped the brand reach a more international audience. This led to the opening of Bvlgari boutiques in New York, Monte Carlo, Paris, and Gevena from the 1970s to the 2000s. In 2001, the company expanded into the hospitality business. Today, they operate numerous Marriott and Ritz-Carlton hotels, which also house boutiques. Bvlgari belongs to the LVMH (Moët Hennessy – Louis Vuitton SE) luxury goods conglomerate. Other LVMH brands include Zenith, Dior, TAG Heuer, and Hublot.