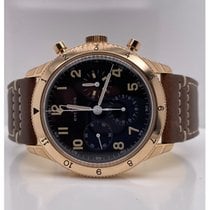 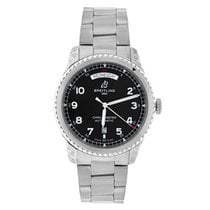 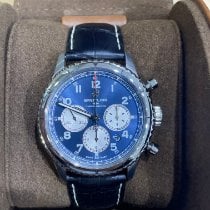 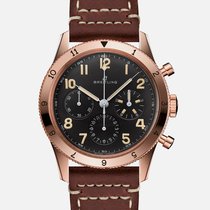 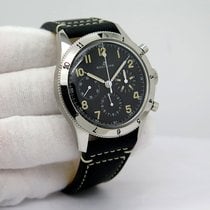 The Aviator 8 puts a new spin on Breitling's long history with pilot's watches. These timepieces pair designs from historical timepieces with state-of-the-art calibers, such as the in-house B01 movement with a 70-hour power reserve.

The Aviator 8 is among the newest Breitling collections. It debuted back in 2018 under the moniker Navitimer 8, causing heated discussion among fans and the press alike. Some applauded it as a reimagination of the classic Navitimer, while others felt its design deviated too greatly from the iconic original. Since then, Breitling has turned this watch into an independent collection: the Aviator 8.

Today's collection includes everything from three-hand editions and chronographs to world-time watches. Top models use the in-house caliber B01 with a 70-hour power reserve. Breitling first introduced this movement in 2009.

Collectors are particularly fond of limited editions like the AVI Ref. 765 1953 Re-Edition. This chronograph pays tribute to the Co-Pilot ref. 765 AVI from 1953 and, fittingly, is limited to a run of 1,953 pieces. Like its predecessor, the retro watch gets its power from a manual caliber, namely the B09, which is based on the B01. Each movement in the Aviator 8 collection comes with chronometer certification.

Reasons to Buy a Breitling Aviator 8

Prices at a Glance: Breitling Aviator 8

How much does a Breitling Aviator 8 cost?

You can purchase a mint-condition three-hand Aviator 8 for as little as 2,900 USD. Models with a day-date display occupy a similar price range. On the high end of the spectrum, you'll find top models in 18-karat rose gold with the in-house caliber B01 selling for around 17,000 USD. The limited-edition AVI Ref. 765 1953 Re-Edition chronograph falls in the middle at roughly 7,300 USD.

Prices for the Standard Edition With the Caliber B01

Standard editions of the Breitling Aviator 8 B01 chronograph cost about 6,100 USD. One example is the Aviator 8 B01 Mosquito ref. AB01194A1B1X1, which is dedicated to the British de Havilland DH.98 Mosquito aircraft. The chronograph features red and orange accents on its dial and hands – a detail taken from markings on the aircraft's fuselage. Otherwise, the dial is black with white Arabic numerals and silver subdials. The brushed stainless steel bezel has a black DLC coating, and the display case back provides a view of the caliber B01 at work. A brown calf leather strap completes the look.

Other standard editions include the Aviator 8 B01 Curtiss Warhawk ref. AB01192A1L1X1. This timepiece takes its inspiration from the American Curtiss P-40 Warhawk fighter, which saw action in World War II. Breitling markets the timepiece as a military watch, hence its olive green dial and strap. The watch also comes with silver subdials and red accents on the chronograph seconds hand, a rotatable bezel, and minute counter. A colored image of the painted P-40 Warhawk and the word "Curtiss" appear engraved on the sapphire crystal case back. You can call this chronograph your own for roughly 6,100 USD.

Fans and collectors should keep an eye out for limited-edition Aviator 8 models. The AVI Ref. 765 1953 Re-Edition ref. AB0920131B1X1 is particularly popular. This chronograph boasts a 41-mm stainless steel case, black dial, and polished, bidirectional bezel. Tan luminous material coats the hands, indices, and Arabic numerals, enabling the wearer to tell the time in the dark. One special feature is the luminous markings in the 15-minute counter at 3 o'clock. Much like the historical predecessor from 1953, there is a marker every three minutes. A 12-hour counter at 6 and small seconds at 9 o'clock round off the dial.

The in-house caliber B09 ticks away inside the case. As a manual caliber, the B09 is thinner than the B01. An engraving reading "One of 1953" adorns the solid case back. An Aviator 8 ref. AB0920131B1X1 will set you back about 7,300 USD. As for its future financial performance, only time will tell.

If you prefer gold watches, you should take a closer look at the limited-edition ref. RB0920131B1X1. Beyond its retro leather strap, case material, and production numbers, this timepiece is identical to the AVI Ref. 765 1953 Re-Edition. Breitling only produced 253 copies of this timepiece, which changes hands for roughly 18,000 USD. The platinum ref. LB0920131C1X1 with a blue dial is even rarer and had a limited production run of 153 pieces. Its official list price sits at 39,900 USD.

There's an hour counter at 6, a small seconds at 9, and a minute counter at 12 o'clock. The Aviator 8 Chronograph 43 follows this same pattern and requires an investment of some 4,200 USD. For the band, you can choose from a black or brown calf leather strap or a three-piece link stainless steel bracelet.

The Aviator 8 Automatic 41 is a fantastic option for fans of simple three-hand watches. Its power comes from the B17, a caliber Breitling crafts based on the ETA 2824-2. This movement provides the watch with a date display at 6 o'clock in addition to its standard time display. Like the chronograph, the Aviator 8 Automatic 41 is available on a brown or black calf leather strap or a stainless steel bracelet. With a price of 3,100 USD in mint condition, this model is the collection's most affordable automatic watch.

If you're on the market for a three-hand watch with a day-date display, look no further than the Aviator 8 Automatic Day & Date 41. The day appears fully written out in a dial cutout at 12 o'clock. Breitling outfits this watch with the caliber B45, a movement based on the ETA 2834-2. Expect to pay about 3,100 USD for an Aviator 8 Day & Date.

For Globetrotters: The Aviator 8 Unitime

Fans of world-time watches should enjoy the Breitling Aviator 8 B35 Automatic Unitime 43. This automatic timepiece displays the time in 24 time zones simultaneously, with each time zone represented by a city name on a ring around the dial's outer edge. You can set the watch to the local time by pulling the crown out to its second position and turning. This causes the hour hands and city ring to rotate. A triangle at 12 o'clock makes it easier to set the time to your current location. There's also a 24-hour disc with a day/night indicator that enables the wearer to tell the time in the individual time zones. Finally, your can adjust the time (i.e., hour, minute, and second hands) in the crown's third position.

Inside the case, you'll find the in-house caliber B35 with a 70-hour power reserve. You can watch this movement at work through the display case back.

The Aviator 8 Unitime comes with a black or silver dial. You can also choose between a stainless steel bracelet or alligator leather strap. A never-worn model will set you back around 6,500 USD.

The Aviator Super 8: 46 mm in Diameter

The three-hand Aviator Super 8 B20 Automatic 46 stands out with its enormous size. Its hefty design comes from the ref. 637 stopwatch used by bomber pilots during the Second World War. Perhaps the Aviator Super 8's most important feature is its bidirectional satin-brushed bezel with eight "grips." A small red triangle rotates with the bezel and can be synchronized with the minute hand, thus enabling you to measure periods of time.

A generous coating of luminous material on the hands and numerals makes telling the time in the dark a breeze. Breitling offers this timepiece in stainless steel with a black dial or titanium with a green dial.

In terms of power, this watch uses the caliber B20 with a 70-hour power reserve. This movement is a modified Tudor caliber MT5612.