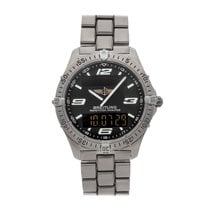 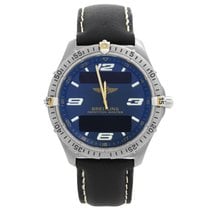 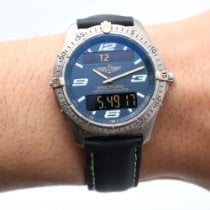 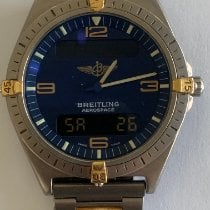 The Breitling Aerospace is a practical tool for pilots. It offers all of the most important functions of a pilot's watch, from a chronograph and timer to a second time zone, while still remaining lightweight thanks to its robust titanium case.

The Swiss manufacturer Breitling first introduced the Aerospace chronograph wristwatch in 1985. At that time, it still belonged to the Navitimer collection, as indicated by the inscriptions on the dial and case back. Today, the Aerospace Evo (i.e., the latest generation) is part of the Professional series.

One of the Aerospace's characteristic features is its set of grips on the bezel at 3, 6, 9, and 12 o'clock. These bezel rider tabs call to mind the automatic watches in the Chronomat and Avenger collections. Thanks to the rider tabs, it's easy to operate the bezel, even with gloves on. The hybrid display is another hallmark of Aerospace models past and present. It displays the time in both an analog (with hands) fashion and digitally on two displays. The Aerospace Navitimer was available in either titanium or as a two-tone model. The two-tone version paired titanium with gold bracelet links and bezel rider tabs.

Breitling introduced the current Aerospace model in 2013. Its chronograph is accurate to within 1/100th of a second and features an alarm, a GMT function, a calendar, and a timer. One particular highlight is its minute repeater, which relays the time via auditory signals.

The quartz movement in the current models is a so-called SuperQuartz caliber. It's thermocompensated, meaning it can account for fluctuating temperatures. What's more, SuperQuartz calibers are COSC-certified chronometers and up to ten times more precise than the average quartz movement. Over the course of one year, they only deviate from the reference time by a few seconds.

5 Reasons to Buy a Breitling Aerospace

Prices at a Glance: Breitling Aerospace

How much does a Breitling Aerospace cost?

The Aerospace is a relatively affordable entry point into the world of Breitling. Models from the 1990s are especially well suited to those looking for moderately priced pilot's chronographs. With any luck, you may even find select Aerospace watches in fine or good condition for less than 1,200 USD. Well-maintained timepieces with their boxes and papers generally demand around 1,400 USD. This includes both two-tone titanium and gold models as well as solid titanium versions.

More recent Aerospace editions from the 2000s occupy the upper end of the price range. Be sure to have roughly 2,400 USD on hand for a watch in excellent condition. The Breitling Aerospace Evo is the latest addition to the collection and sells for upwards of 2,500 USD pre-owned. The titanium variant with a black DLC coating costs approximately 2,900 USD.

The collection's top models are made of 18-karat yellow gold and had limited production runs of several hundred pieces. One example is the ref. K65062, which will set you back around 13,000 USD.

At 40 mm in diameter, early Aerospace models look great on a wide range of wrist sizes. Each timepiece gets it power from one of two quartz ETA movements: either the 988.332 or 998.332, also known at Breitling as the B56 and B65, respectively. The latter boasts a chronograph function, perpetual calendar, second time zone, and alarm.

At the turn of the millennium, Breitling introduced the SuperQuartz caliber B75 to the Aerospace collection. This movement is based on the ETA Thermoline. SuperQuartz movements set themselves apart with their extremely high precision and imperviousness to fluctuations in temperature.

The 2005 release of the Breitling Aerospace Avantage saw the case expand from 40 to 42 mm in diameter. The manufacturer also made changes to its interior, namely the switch to the SuperQuartz caliber B79, which is also based on an ETA movement. This caliber comes with backlit digital displays that are easy to read under all lighting conditions. The Avantage disappeared only two years after its debut, at which time it was renamed simply "Aerospace" with an inscription reading "Chronometre Aerospace" on its dial.

Breitling presented the Aerospace Evo in 2013. Like its predecessors, the Evo is made of titanium. It has also retained the four rider tabs and four large Arabic numerals at 3, 6, 9, and 12 o'clock. Even the multi-functional SuperQuartz caliber made the transition to the Evo. One thing that has changed is the size: The case grew from 42 to 43 mm. You can choose between black, blue, and gray for the dial and leather, textile, rubber, or titanium for the band.

The Aerospace Evo is also available with a titanium bracelet and Co-Pilot module. Thanks to its liquid crystal display, this module can display a second time zone, function as a chronograph, and even show departure and arrival times. You can operate the additional display using two pushers on the side of the module.

The Breitling Aerospace Evo Night Mission joined the collection in 2015. This chronograph has a brushed, black-coated titanium case. However, what makes this watch truly unique is its military look that prevents light from reflecting off its surfaces. The display's backlighting, which you can see using night vision, and the brown or anthracite textile strap also contribute to the stealthy look. The strap is especially robust and has a fold-over clasp. A rubber strap is also available.

Breitling celebrated the Aerospace's 30th anniversary by introducing a limited edition: the "30e anniversaire." This watch had a limited run of 300 pieces and catches the eye with its black-coated titanium case and bright yellow dial. You'll need to have about 7,100 USD on hand to buy one of these collector's items.

When Breitling first introduced the Aerospace in 1985, it was a modern interpretation of the Navitimer. It featured robust titanium for its case and bracelet, four grips on the bezel, and a hybrid display. During the 1980s, these weren't typical Breitling characteristics. Quartz movements were all the rage at the time; they ran more precisely than mechanical movements and had a greater number of functions. This made the Aerospace perfect for professional use in airplane cockpits.

The average quartz watch deviates by about 15-30 seconds from the reference time every month. Compared to a mechanical watch, it's incredibly accurate. A mechanical, COSC-certified movement can deviate by up to +6 or -4 seconds a day, equal to +180/-120 seconds every month.

Breitling started using SuperQuartz movements in the Aerospace collection in the early 2000s. The manufacturer has the movements certified by the COSC, ensuring they run incredibly precisely. The COSC's criteria for a quartz caliber are much stricter than they are for a mechanical caliber. A quartz movement may only deviate by a maximum of +/-0.07 seconds a day. Altogether, that's a total of 2.1 seconds a month. Thus, the Aerospace models are over ten times more precise than the average quartz watch.

Furthermore, SuperQuartz movements offer practical functions. The chronograph function enables you to measure time in increments of 1/100th of a second. A mechanical movement like the Valjoux 7750, one of the world's most successful automatic chronograph calibers, is "only" accurate to within 1/8th of a second. The Aerospace can also time up to 48 hours. In addition, it has other functions, such as a digital calendar, an alarm clock, a timer, and a second time zone. The second time zone feature is useful for those who often travel between time zones. With this feature, you can keep an eye on both the local time and the time back home. A more notable, rarer feature is the timepiece's minute repeater. The function repeats the current time via auditory signals on command.