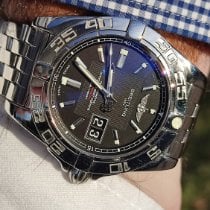 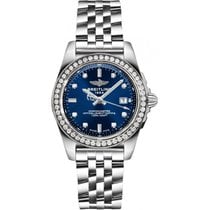 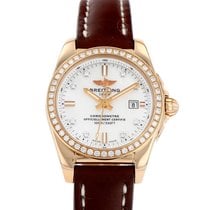 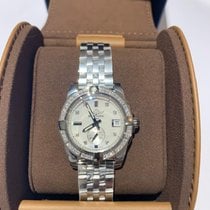 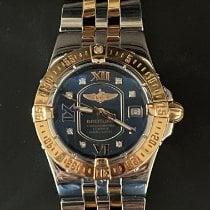 Introduced in 2010, the Breitling Galactic collection stands out with its sporty elegance. As is so often the case, these Breitling watches combine robustness with precision. Top models feature mother-of-pearl dials and diamonds.

5 Reasons to Buy a Breitling Galactic

Stylish Watches from the Breitling Universe

The Breitling Galactic is a young collection. It made its debut in 2010, when the Swiss luxury watch manufacturer presented the Chrono Galactic, a 39-mm chronograph. This timepiece is relatively small by Breitling standards. They also released a 41-mm three-hand edition at the same time. One of this model's most distinctive features is its big date window at 3 o'clock. This type of display adds an elegant touch to the rather sporty Galactic collection.

At Baselworld 2015, Breitling launched a version with the chronometer-certified in-house caliber B35 and a tungsten-carbide bezel: the Galactic Unitime SleekT . At 44 mm in diameter, this timepiece with a world time function is much flashier than the Chrono Galactic. The Galactic 44 followed in 2017. Its case and dial resemble those of watches from the Avenger and Colt collections. However, unlike those timepieces, the Galactic model has a day display at 12 o'clock.

Since Georges Kern became Breitling's new CEO in 2017, the collection has been completely revamped and massively expanded. Models between 39 and 44 mm in diameter have disappeared in favor of smaller watches with 29, 32, or 36-mm cases. Furthermore, materials like mother-of-pearl, rose gold, and diamonds have made their way into the lineup – a clear indication that Breitling now sees the Galactic as a collection for both men and women. Among top models, you'll find the Galactic 32 Sleek. This two-tone watch is made of stainless steel and rose gold. Its case is 32 mm in diameter and features a diamond-studded bezel. This model has a list price of 10,860 USD.

How much does the Breitling Galactic cost?

Prices for the Galactic Unitime SleekT

The in-house caliber B35 ticks away inside the Breitling Unitime SleekT. This chronometer-certified movement makes it easy to tell the time anywhere in the world. Breitling has two patents on this caliber: one for the differential system between the movement and city disc and another for the winding and setting mechanism. These components allow the wearer to set the dial's synchronized displays all at once rather than individually.

The dial is available in black or white and is composed of a world map with applied line indices. A disc with different city names runs around the outside of the dial. This 44-mm stainless steel watch is water-resistant to 100 m (10 bar, 328 ft) and comes with a bezel made of scratch-resistant tungsten carbide. The final timepiece is mounted on a stainless steel bracelet. Prices for the version with a black dial sit around 5,800 USD new and 4,700 USD pre-owned.

Breitling Galactic 41 with a Big Date

The Breitling Galactic 41 debuted in 2010. It has a polished stainless steel case and is water-resistant to 300 m (30 bar, 984 ft). This watch is powered by the in-house caliber B49 with central hour, minute, and seconds hands. There's also an oversized date display at 3 o'clock. Applied indices sit atop the black dial. These markers are coated in SuperLuminova, guaranteeing optimal readability regardless of lighting conditions. The bracelet and diving bezel are both made of stainless steel, lending this watch its striking yet elegant look.

You can find this watch for about 3,700 USD in mint condition on Chrono24. Pre-owned pieces demand roughly 3,000 USD.

Thanks to its diamond-studded mother-of-pearl dial and rose gold accents, the Galactic Automatic 36 is a true eye-catcher. This 36-mm two-tone watch is water resistant to 100 m (10 bar, 328 ft). Sapphire glass protects the front displays from the elements. The chronometer-certified Breitling caliber B37 powers this watch and provides it with its 42-hour power reserve.

Rose gold hands display the hours and minutes. The hand of the small seconds dial at 6 o'clock is also made of this precious metal. A date display sits at 3 o'clock. Rose gold indices mark the hours at 3, 6, 9, and 12 o'clock, while eight diamonds represent the other hours. The unidirectional diving bezel is made of rose gold and features a large luminous pearl made of SuperLuminova.

A never-worn version costs around 7,200 USD. On Breitling's website, this model has a list price of 9,720 USD.

The 32-mm Galactic 32 Trophy Black is a fine stainless steel women's watch. Its black bezel is made of polished tungsten carbide. The dial is also black in color and features applied luminous indices. Breitling's chronometer-certified quartz caliber B71 ticks away inside this timepiece. It has central hands for the hours, minutes, and seconds, as well as a date display at 3 o'clock. This model features sapphire glass and is water-resistant to 100 m (10 bar, 328 ft).

You can choose from one of two band options. The version on a stainless steel bracelet has an official list price of 4,210 USD; however, this same watch sells for around 4,000 USD on Chrono24. You can save even more by purchasing the edition on a black leather strap with white stitching. This model has a list price of 3,865 USD, according to Brietling's website.

An Overview of the Galactic 32 Sleek Trophy Black