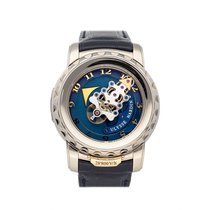 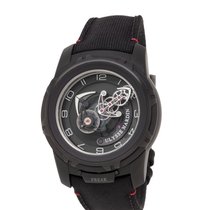 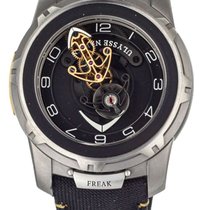 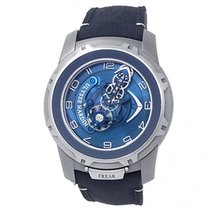 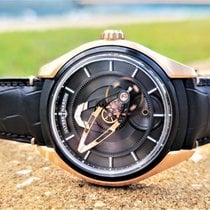 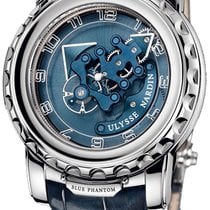 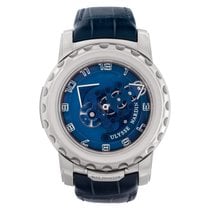 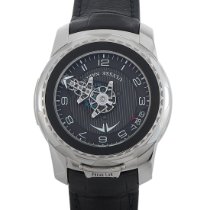 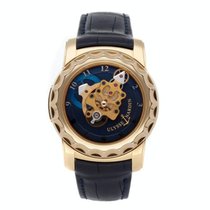 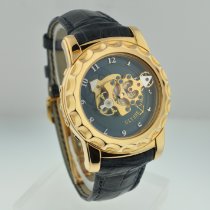 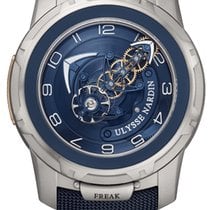 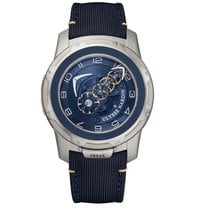 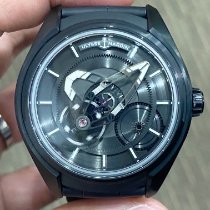 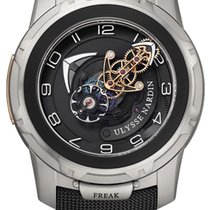 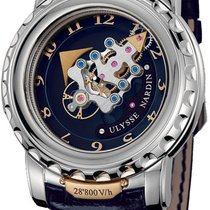 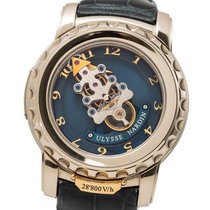 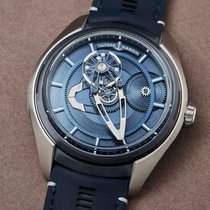 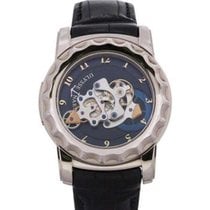 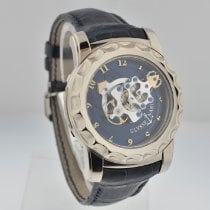 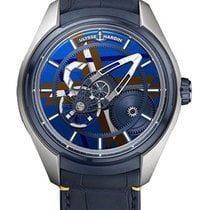 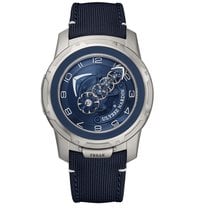 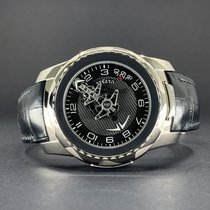 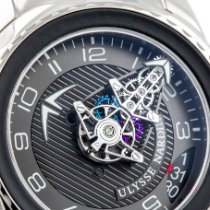 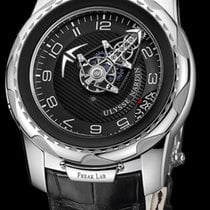 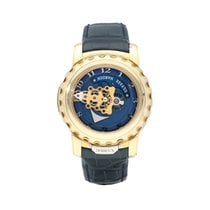 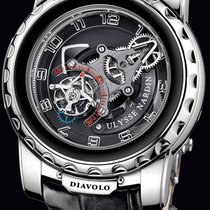 61
US
Next
Save this search

The Ulysse Nardin Freak was the world's first watch with silicon components. They revolutionized the watch industry with their innovative caliber technology and their unique, handless display. The time is displayed by the movement itself.

When Ulysse Nardin debuted the Freak in 2001, they turned the watch industry upside down in two ways: The luxury watch was the first wristwatch with silicon components, and it made do without hands, a dial, or a crown. The time is displayed by the movement itself. Two bridges revolve around a shared central stem so that the upper movement indicates the minutes and the bottom indicates the hours. The silicon that is used in the components is the latest thing in watchmaking due to its hardness, lightness, and anti-magnetic qualities . Other Swiss manufacturers have also started to use the innovative material alongside Ulysse Nardin, Omega being one example.

The rotating bezel and case back are used to set and wind the Freak. Once fully wound, the watch runs for seven days straight. That is why Ulysse Nardin also touts having the first "7-day tourbillon carrousel" in the history of watchmaking.

Fans of seconds displays should take a closer look at the Freak Phantom. This model has a flying tourbillon that shows the seconds at the end of its movement. The tourbillon turns a full 360 degrees in 60 seconds, making it perfectly suited for indicating the seconds. The manufacturer caliber UN-208 has a power reserve of eight days . The 45mm gold watch with the reference number 2086-115 is limited to 99 pieces and costs at least 92,000 euros in mint condition.

What does a Ulysse Nardin Freak cost?

The Freak Cruiser shows the time with an anchor-shaped tip at the end of its movement bridge and reminds us of Ulysse Nardin's seafaring tradition. The Freak Blue Cruiser has an especially maritime flair thanks to its blue leather strap and blue time display. A rose gold Blue Cruiser in mint condition costs about 64,000 euros and 72,000 euros for white gold.

Evolution with Silicon and Diamonds

Four years after the premiere of the first Freak, Ulysse Nardin introduced the Freak 28'000 V/h Diamond Heart model. This watch had several new features, including movement components made of diamond and diamonds set on the movement bridges and platinum case. It also features the patented Dual Ulysse escapement, replacing the pervasive Swiss anchor escapement. The two escape wheels and a triangular lever with two small lugs set this escapement system apart. The rare 2005 watch can be found for 85,000 euros.

The next development followed in 2007: the Freak DIAMonSIL. Since diamonds are very costly, Ulysse Nardin used a new, more affordable material made from silicon and diamond in the follow-up model. The Freak DIAMonSIL was the first watch to have a silicon escapement with a layer of diamond, which is reflected in the 128,000 US dollars list price.

In the same year, Ulysse Nardin developed the concept watch InnoVision, which contained over ten innovations. These innovations highlighted their role as pioneers and trailblazers in the realm of silicon technology. The Le Locle-based manufacturer slowly introduced these new features to their series models. Nowadays, silicon shock protection and hairsprings are standard features of all Ulysse Nardin watches.

Ten years later, they presented the Innovision 2 at SIHH Geneva. The manufacturer's engineers and watchmakers proved their inventiveness once more with this concept timepiece. There were ten additional new technologies, which are also set to find their way into the series models. A few of the InnoVision 2's highlights are a new, enormously efficient winding mechanism called the "Grinder," a constant force escapement, and a silicon bridge coated in sapphires. The sapphire coating lengthens the component's durability and is considerably more affordable than the former diamond coating.