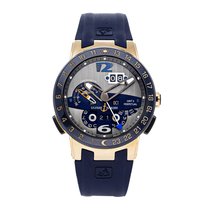 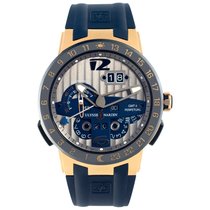 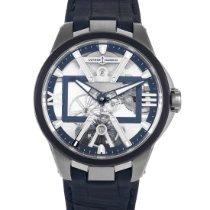 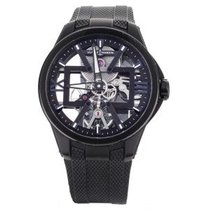 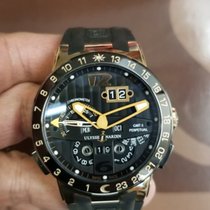 The Ulysse Nardin El Toro has one of the best perpetual calendars. All the calendar displays can be set forward and backward with the crown thanks to the in-house caliber. It has the technology of an A.Lange & Söhne and the appearance of a Hublot.

The Ulysse Nardin El Toro combines an intricate in-house caliber with precious materials and an avant-garde design. Its technology is as complicated as that of a Patek Philippe and its look is reminiscent of a Hublot. Its innovative movement makes the El Toro one of the most robust wristwatches featuring a perpetual calendar and second time zone.

It's water resistant to 100 m (10 bar) and is also easy to use. The calendar function is set using the crown thanks to the UN-32 movement. If the calendar's calibration somehow goes wrong, you can easily correct the problem because the movement enables you to set the date, day, month, and year displays forward or backward. This means you don't have to send it back to the manufacturer, as is the case with many watches when their perpetual calendar displays the wrong information.

Setting the hour hand to the local time is just as simple as setting the perpetual calendar. The time can be set forward using the left push button and backward with the right push button. The arrow-shaped third central hand and a 24-hour scale on the ceramic bezel show the time back home. A sun at 12 o'clock represents noon, and a crescent moon across from it is the symbol for midnight.

How much does a Ulysse Nardin El Toro or Black Toro cost?

A Perpetual Calendar and Dual Timer All in One

Ulysse Nardin introduced the first El Toro with a 43-mm platinum or 18-karat gold case in 2010. Both variants are limited to only 500 pieces. Visual characteristics of this timepiece are its black, ceramic bezel with a 24-hour scale and a T-shaped bridge connecting the calendar displays in the middle of the dial. The outsize date at the 1 o'clock position is the only feature not connected to the T-bridge.

The hands for the hours and minutes are well thought out. They are largely skeletonized so as not to block the calendar displays and the subsidiary seconds dial at 9 o'clock. Even the decentralized seconds hand is skeletonized. The tips of the minute and hour hands contain luminous material and are easy to read in dark environments. The majority of the year and month discs is exposed. The manufacturer caliber UN-32 is also visible through the case back, which is made of sapphire glass. The automatic movement is certified by the Official Swiss Chronometer Testing Institute (COSC), meaning it is highly accurate. It also has a power reserve of 45 hours. The UN-32 is based on the Ebel caliber 137, which Ulysse Nardin acquired rights to in 2012.

The Ulysse Nardin El Toro stays on your wrist with either a leather or rubber strap. The latter underlines the watch's sporty character and is better suited to swimming or bathing than the fine leather variants. This timepiece makes its presence on your wrist known with its beefy lugs and 43-mm case. It almost seems like a Panerai or Royal Oak Offshore from Audemars Piguet. However, at 15 mm, the Ulysse Nardin El Toro is relatively flat for an automatic watch with a perpetual calendar and second time zone.

From a technical perspective, the Ulysse Nardin El Toro has two prominent predecessors: the Perpetual Ludwig from 1996 and the GMT +/- Perpetual from 1999. The Perpetual Ludwig is dedicated to the watch-making genius Ludwig Oechslin. Oechslin is one of the leading figures at Ulysse Nardin. The "Trilogy of Time" and the Freak both came to be under his leadership. Today, he is a partner at the small manufacturer Ochs und Junior from Zurich.

The Perpetual Ludwig is considered exceptional because it's so easy to use. Its displays can be set forward or backward. If you were to set other watches incorrectly, painstaking corrections would be required. Ulysse Nardin revolutionized the complicated calendar mechanism with the Perpetual Ludwig by enabling every display to be calibrated with the crown. No further push buttons or tools are necessary. You can buy this extremely limited watch with the caliber UN-33 in fine condition for around 15,000 euros.

The second foundational mechanism of the El Toro is the GMT function from the GMT +/- Perpetual . The third central hand showing the second time zone can be set forward or backward using the two buttons on the case. The GMT +/- Perpetual, like the Ulysse Nardin El Toro, utilizes the caliber UN-32. Pre-owned versions can be found starting at 14,000 euros, while those in mint condition can be found starting at 18,000.