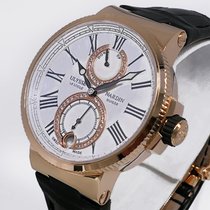 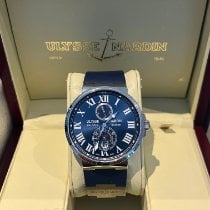 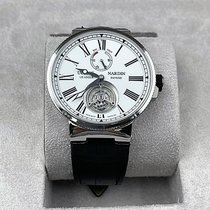 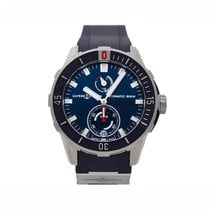 The Marine collection from Ulysse Nardin is an homage to the high-precision marine chronometers of times past. Top models have a flying tourbillon and a minute hand held by thin wires, which is reminiscent of a ship's mast.

The Marine wristwatch collection from Ulysse Nardin is a symbol of the Le Locle-based manufacturer's maritime tradition. Throughout their history, they have created innumerable marine chronometers for seafaring and navigation. In the past, sailors would not have been able to determine their position without a chronometer. The classic design of the current Marine collection brings such marine chronometers to mind while also utilizing advanced precision technology. One example of this technology is the Ulysse Nardin Marine Chronometer Manufacture with the in-house caliber UN-118, which was introduced in 2012. This movement uses a silicon balance spring and diamond-coated silicon components. An indicator under the 12 o'clock position shows when the watch's 60-hour power reserve is almost depleted.

Top watches from the Marine collection include the Ulysse Nardin Marine Tourbillon and the Marine Regatta Chronograph. The latter model, which is primarily aimed at sailing enthusiasts, was presented in 2017, at the Salon International de la Haute Horlogerie Genève (SIHH). The regatta chronograph's countdown function is perfect for the initial stage of a sailing regatta and can be set up to 10 minutes. Once you start the timer, the stopwatch hand and second minute hand begin to move in a counterclockwise direction so that you can measure the length of the race. The timed minutes and seconds can be found on a subdial at 6 o'clock. You can buy new examples starting at 12,000 euros.

The Ulysse Nardin Marine Tourbillon also first appeared in 2017. Containing an automatic in-house caliber with a flying tourbillon, it is an example of fine watchmaking. It should come as no surprise that its caliber, the UN-128, uses the most advanced silicon technology. The watch's design is typical of the Marine series. Roman numerals and a white grand feu enamel dial, produced by daughter company and dial specialists Donzé Cadrans, exemplify its marine chronometer look. This tourbillon watch has a 60-hour power reserve and costs around 20,000 euros.

How much does a Ulysse Nardin Marine cost?

Prices for watches from the Ulysse Nardin Marine collection are around 2,600 euros for pre-owned models and about 208,000 euros for a Marine Grand Deck Tourbillon in mint condition. You can get a Marine Chronometer 1846, which was introduced in 1996, in fine condition for an affordable 2,900 euros. New versions are hard to come by and, therefore, cost around 7,000 euros.

A Complicated Tourbillon Watch with an Innovative Minute Display

The Grand Deck Tourbillon comes in three versions: platinum, rose gold, or white gold and each is limited to 18 pieces. The manufacturer was inspired by sailboats when designing this watch. The wooden dial is reminiscent of a boat's deck, and the minute hand held by small wires looks like a mast. These wires move the hand over a minute scale on the dial, thus indicating the time. Once an hour has passed, the hand goes back to its starting position. Hours are indicated via a display with two windows under the 12 o'clock position. To top off the luxury watch's complexity, Ulysse Nardin equipped the Marine Grand Deck with a flying tourbillon.

Features a Chronograph and Annual Calendar

A markedly more affordable and somewhat less complex watch is the Marine Chronograph. You should set aside around 9,000 euros for a stainless steel model with the manufacturer caliber UN-153 and the reference number 1533-150-3/40. Alongside the stopwatch function, this luxury watch offers an annual calendar, which you can adjust both forward and backward. The date can be read from a small window at 6 o'clock and the month in a subdial at 9 o'clock. If you prefer the 18-karat rose gold version, make sure to set aside around 25,000 euros.

A New Version of the Ulysse Nardin Marine Chronometer

Ulysse Nardin presented the Marine Chronometer Torpilleur in 2017 as a lighter and thinner version of the popular Marine Chronometer. The added "Torpilleur" is a reference to the faster and lighter torpedo boats that were developed in the 19th century and used into the mid-20th century. The case of this re-imagined luxury watch is 42 mm and made of stainless steel or 18-karat rose gold.

The automatic in-house caliber UN-118 is used to power this watch. The movement has a certificate from the Official Swiss Chronometer Testing Institute (COSC) and has also passed the company's own testing. Their test looks at the watch's resistance to pressure and water, among other things. In terms of accuracy, the Ulysse Nardin process is actually a bit stricter than the COSC chronometer test. This means a Marine Chronometer Torpilleur only deviates a maximum of +6 or -2 seconds per day. A watch certified by COSC is allowed to deviate +6 or -4 seconds per day. You can call a stainless steel model your own for around 5,000 euros. For the rose gold version, you should set aside 13,000 euros.

If you tend to prefer a sporty design and would like to go into the water with your watch, we recommend you look at the Diver collection from Ulysse Nardin. In addition to being water resistant to 300 m (30 bar), it also has a rotating bezel that can only be turned counterclockwise to keep you safe during your dive. Chronographs and women's watches with diamond studding and mother-of-pearl dials are also available. You should prepare to spend at least 21,000 euros for a new diamond watch with the reference number 3202-190-3C/10.10. A men's chronograph from this collection can be found in mint condition for around 8,500 euros or around 5,000 euros for a new three-handed model. Pre-owned examples are even more affordable with prices starting around 3,000 euros.