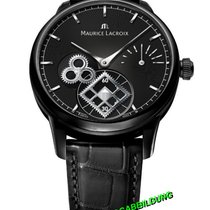 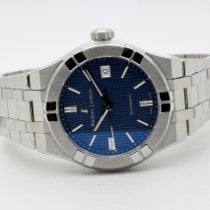 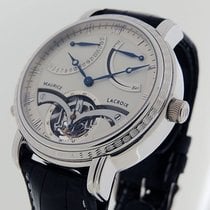 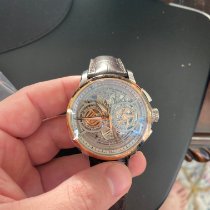 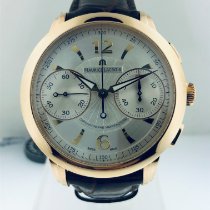 A Young Company with a Traditional Approach

Desco von Schulthess Holding AG founded Maurice Lacroix in the Swiss town of Saignelégier in 1975. The brand's name is a reference to a former member of Desco's board, who passed away shortly before the new company's foundation.

Since then, Maurice Lacroix has become a force to be reckoned with in the Swiss watch industry. Their catalog contains several collections in a wide range of designs, from modern and sporty to timeless and elegant. Top models include the watches of the Masterpiece collection. This collection is home to timepieces with skeletonized in-house calibers, a moon phase display, a chronograph function, or retrograde displays. The Masterpiece Square Wheel Retrograde is a true sight to behold with square and clover-shaped gears serving as its small seconds display.

The brand's sportiest models belong to the Aikon and Pontos collections. Aikon watches make a statement with their six distinctive bezel rider tabs. Both collections offer three-hand watches and chronographs. While Maurice Lacroix exclusively outfits Pontos timepieces with automatic movements from ETA and Sellita, the Aikon is also available with a quartz movement.

Sophisticated women should take a look at the Fiaba collection. With sizes ranging from 28 to 36 mm, these timepieces are the perfect choice for more delicate wrists. Fiaba watches blur the line between jewelry and timepiece thanks to their diamonds, gold PVD coatings, and exquisite dials. Precise quartz calibers provide these models with their accurate timekeeping.

How much do Maurice Lacroix watches cost?

The name "Masterpiece" speaks for itself. Maurice Lacroix has been filling this collection with their most exquisite and complicated watches since 1990. For example, the company's first in-house caliber, the ML106, debuted inside a Masterpiece chronograph in 2006. Today, all Masterpiece models come with an in-house caliber.

One example is the Masterpiece Mysterious Seconds with the automatic caliber ML215. Its namesake "mysterious seconds" function features a decentralized seconds hand that appears to float around the dial. Given this unique technological marvel, you'd be forgiven for overlooking the time display at 2 o'clock and the stunning skeletonized movement. This 43-mm stainless steel watch is available with a black or white dial and sells for between 10,500 and 12,000 USD.

The in-house caliber ML134 takes center stage in the Masterpiece Skeleton. Here, Maurice Lacroix foregoes a traditional dial and puts this intricate manual movement and its many gears on full display. The 43-mm stainless steel case comes with a polished finish or black PVD coating. You can call a mint-condition model your own for about 4,800 USD.

The Swiss manufacturer also offers a skeletonized watch with a chronograph function, namely the Masterpiece Chronograph Skeleton. Its open dial provides a clear view of the in-house caliber ML206, which lends this timepiece its central hands, a 30-minute counter at 3, and a small seconds at 9 o'clock. At 45 mm in diameter, this watch is slightly larger than its sister models. When it comes to the case, options include plain stainless steel, stainless steel with a dark blue PVD coating, and a two-tone version with an 18-karat gold bezel. Prices depend on the model and range from 5,900 to 7,000 USD.

Maurice Lacroix is best known for their watches with retrograde displays. "Retrograde" means that the display's hand jumps back to its starting position once it reaches the end of its scale. In the Masterpiece collection, you can find this function on the Moonphase Retrograde, the Embrace, and the Square Wheel Retrograde.The Moonphase Retrograde has two retrograde displays: one for the date between 9 and 11 o'clock and another for the day between 1 and 3 o'clock. A small seconds at 6 o'clock takes up much of the dial's lower half. The moon phase display sits within this large subdial. You can call this watch with a blue or silver dial your own for around 4,200 USD.

Gravity watches feature an off-center time display at 2 o'clock and a small seconds subdial at 5 o'clock. Both displays sit atop the in-house caliber ML230's base plate with a colimaçon finish. You can also view the automatic movement's escapement system, escape wheel, and silicon balance spring at 9 o'clock.

These timepieces measure 43 mm in diameter and are available in polished stainless steel or with a black PVD coating. The different models cost between 7,400 and 9,100 USD.

Maurice Lacroix released the first Aikon watches in 2016. This series is the direct descendant of the Calypso collection from the late 1990s. Six polished bezel rider tabs and an integrated bracelet or strap characterize every Aikon watch. The resulting timepieces feel very sporty and bear a striking resemblance to all-time classics like the Audemars Piguet Royal Oak and Patek Philippe Nautilus.

The Aikon is the largest collection in Maurice Lacroix's catalog. It contains men's, women's, and unisex watches in various sizes; three-hand watches, chronographs, and the Aikon Venturer diving watch series; and quartz and automatic timepieces. The dials come in black, silver, blue, or anthracite, many of which feature a sunburst pattern or guilloché engraving.

Maurice Lacroix's designers decided against a dial for the Aikon Automatic Skeleton. As a result, the wearer has an unobstructed view of the intricately skeletonized in-house caliber ML234. Sapphire crystal on the front and back means you can watch the movement at work from above and below. Other top Aikon models feature bronze cases, a black PVD coating, or a camouflage aesthetic.

The Aikon Automatic Skeleton changes hands for about 4,800 USD. If you're interested in an automatic chronograph, you should plan on spending around 2,300 USD. Quartz chronographs sell for roughly 1,100 USD. Three-hand watches with a quartz caliber demand some 980 USD. On the other hand, their automatic counterparts cost anywhere from 1,400 to 1,700 USD. The Aikon Venturer diving watch is water resistant to 300 m (30 bar, 656 ft) and requires an investment of just over 2,100 USD.

The Aikon Automatic Mercury boasts a truly extraordinary complication. Its in-house caliber, the ML225, comes with Maurice Lacroix's patented time memory module. This small mechanism allows the hands to swing freely. However, they automatically return to their normal position and display the current time when held upright.

Expect to pay around 6,500 USD for this exceptional timepiece.

Features of the Aikon Collection

The Pontos collection is made up of sporty dress watches. Introduced in 1999, these timepieces feature timeless and elegant sunburst dials in your choice of black, anthracite, blue, or silvery white.

The collection has exclusively featured three-hand watches and chronographs since 2016. Prior to that, Maurice Lacroix also produced Pontos watches with a GMT function. Each Pontos houses an automatic ETA caliber. Three-hand watches use the caliber ML143, which is based on the ETA 2836-2, while chronographs get their power from a slightly modified version of the Valjoux 7750.

Prices for Pontos watches depend on their year of production and condition. For example, you can purchase a well-maintained Pontos GMT for as little as 610 USD. More recent three-hand watches with a day-date display cost between 1,300 and 1,700 USD. The price range for chronographs is similarly broad. While mint-condition models from recent years demand around 2,400 USD, pre-owned pieces from the early 2000s often sell for less than 890 USD.

Maurice Lacroix ceased production of the Pontos S in 2016. This professional diving watch is suited to saturated diving thanks to its depth rating of 600 m (60 bar, 1,969 ft) and automatic helium escape valve. One of the Pontos S' defining features is its internal diving bezel, which is operated via an additional crown at 2 o'clock. Luminous material coats the hands, numerals, and indices so that you can always tell the time, even in the dark. Based on the Sellita SW200, the automatic caliber ML115 ticks away inside the 43-mm case. Plan to spend between 1,300 and 1,600 USD on one of these diving watches.

You'll also find the Pontos S with a chronograph function. These timepieces come with the same internal diving bezel; however, they are only water-resistant to 200 m (20 bar, 656 ft) and lack a helium escape valve. Their power comes from either the ETA 7750 or the identical Sellita SW500. Standard editions have a stainless steel case and cost about 1,900 USD. For about 110 USD more, you can get your hands on the special FC Barcelona edition. It features the Catalan club's crest on its dial, case sides, and stainless steel case back.

The Pontos S Extreme is another interesting alternative. It's made of Maurice Lacroix's proprietary Powerlite alloy, a mixture of aluminum, magnesium, titanium, zirconium, and ceramic. This material is extremely light and robust and is easy to produce in different colors. For example, Pontos S Extreme models are available with a black, titanium gray, blue, or green case. Prices for these chronographs sit around 2,100 USD.

The Eliros collection has enjoyed widespread popularity since its introduction in 2006. Its clean and classic designs, flat construction, and diverse range have made this series a great success. With cases ranging from 30 to 40 mm in diameter, there's something for everyone.

A majority of the collection is comprised of classic three-hand dress watches with a date display. However, there are also models with a moon phase display or chronograph function. Every Eliros watch features a stainless steel case housing a quartz ETA movement. Dial options include black, white, blue, and anthracite, as well as sunburst designs and mother-of-pearl. Stainless steel Milanese bracelets or matching calf leather straps hold these timepieces securely on the wrist.

Three-hand Eliros models sell for around 560 USD, while chronographs demand about 950 USD. Versions with a moon phase display and diamond-studded dial and bezel top the price range at 2,000 USD.

The tidy dials are available in black, white, or silver. Most silver models feature an appealing sunburst pattern, while the black and white editions are lacquered.

Maurice Lacroix equips the collection's top models with a pointer date and moon phase display. These editions require an investment of about 1,900 USD on a leather strap and 2,100 USD on a metal bracelet. On the other hand, simple three-hand men's watches with a date cost roughly 1,100 USD. Prices for similar women's watches begin around 970 USD. If you'd prefer a two-tone model with an 18-karat gold bezel, be sure to have some 2,300 USD on hand.

The History of Maurice Lacroix

The Maurice Lacroix brand first appeared in 1975. However, the company's roots actually stretch back to 1961. That year, the Zurich-based wholesale company Desco von Schulthess Holding AG acquired a watch-assembly company in Saignelégier, Switzerland with the goal of producing their own timepieces. Desco was already familiar with the watch trade, having served as the distributor for brands like Audemars Piguet, Heuer, and Jaeger-LeCoultre in the Asian market.

They initially focused on so-called "private label watches" stamped with other brands' logos. This all changed with the foundation of the Maurice Lacroix brand. The company's name comes from Maurice Lacroix, a long-time member of Desco AG's board, who had passed away shortly before the brand's creation.

Success came almost immediately. Maurice Lacroix was among the first manufacturers to create watches with display case backs, among other claims to fame. In an effort to increase their independence, the company purchased the case manufacturer Queloz in 1989. They reached another milestone in 2006 with the release of their first in-house caliber, the ML106. Since then, Maurice Lacroix has become an established industry name and earned a reputation for producing watches with retrograde displays. As of 2015, Maurice Lacroix is no longer owned by a holding company.