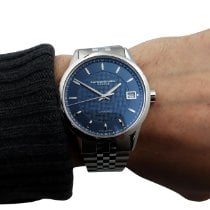 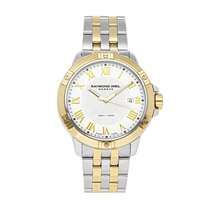 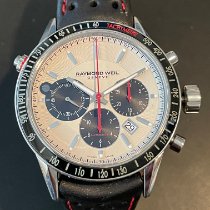 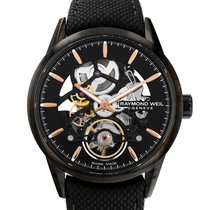 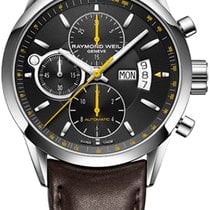 A Young Family Business with a Passion for Music

Music plays a major role in every watch, from conception to the final design. The very first Raymond Weil timepiece bore the name "Amadeus" in honor of famed Austrian composer Wolfgang Amadeus Mozart. This watch debuted in 1983 alongside Miloš Forman's renowned biopic of the same name. The Genevan manufacturer maintains the tradition of music-related names with collections like Othello, Parsifal, Toccata, and Don Giovanni.

Raymond Weil has also created watches in tribute to modern music icons, including Frank Sinatra, the Beatles, David Bowie , and AC/DC. There are also models dedicated to companies like Gibson, Marshall, and Sennheiser. Furthermore, the Swiss brand has partnerships with the Royal Albert Hall, the VH1 Save The Music Foundation, and the prestigious BRIT Awards.

Raymond Weil watches sit at the intersection of classic chic and sporty elegance. Their catalog contains everything from simple, three-hand models to complicated editions with a chronograph function, moon phase display, or tourbillon. Precise Swiss quartz or automatic calibers from movement manufacturer ETA power a majority of these timepieces. Select models feature the company's in-house caliber, which first debuted in 2013.

How much do Raymond Weil watches cost?

The Freelancer is Raymond Weil's largest and most diverse collection. While the designs are on the sportier side, they still look good paired with business attire. You can choose from chronographs, diving watches, and elegant three-hand timepieces with a skeletonized or semi-skeletonized dial. There are also models with an innovative half-moon date display. The Freelancer collection contains several limited editions dedicated to the likes of Jimi Hendrix, David Bowie, and Australian rock legends AC/DC. The iconic Gibson Les Paul electric guitar also has a Freelancer in its honor.

Prices for Freelancer watches depend on the model and its features. Skeleton watches and chronographs are at the top of the price list at around 2,100 USD. Diving watches and semi-skeletonized versions cost slightly less at roughly 1,800 USD. Simple three-hand timepieces sell for as little as 1,200 USD.

The Tango collection bears many similarities to the Freelancer series. It is also home to three-hand watches, chronographs, diving watches, and models with a second time zone. However, unlike Freelancer watches, current Tango models are available exclusively with quartz movements.

Tango watches demand lower prices as a result. For example, you can purchase a chronograph beginning around 1,000 USD. Be prepared to spend about 890 USD on a timepiece with a GMT function. The three-hand editions are the most affordable at approximately 780 USD.

Parsifal: A Diverse Collection for Men and Women

The Parsifal collection has been a staple of the Raymond Weil catalog since its debut in 1991. In that time, the collection has undergone a few changes. The Genevan manufacturer has produced quartz and automatic chronograph models, versions with a second time zone, and rectangular women's watches. Despite the many differences, every watch clearly belongs to the Parsifal series. Consistent design elements include flat bezel rider tabs and Roman numerals. The final result is a collection of truly classic timepieces.

In 2018, Raymond Weil presented a new Parsifal watch with an integrated stainless steel bracelet and a quartz ETA movement. This model is available as a 41-mm men's watch with three hands and a date display or a 30-mm women's variant with two hands and a date window. Select women's models also feature diamonds.

Plan to spend around 1,400 USD on a new men's watch. The women's Parsifal edition sells for between 1,200 and 1,700 USD depending on the model. Older timepieces with a quartz movement change hands for as little as 330 USD. You can purchase a well-maintained chronograph with an automatic caliber for just under 1,100 USD.

If you're on the market for a classically elegant dress watch, look no further than the Toccata collection. The men's version is a comfortable 39 mm in diameter, while the women's model measures in at a modest 29 mm. A narrow, polished bezel surrounds the clean white, blue, anthracite, or black dial. In addition to different dial colors, you can also choose between Roman numerals or thin line indices. Swiss quartz movements provide each timepiece with a date display at 3 o'clock.

Both men's and women's Toccata watches cost about 670 USD. Exceptions include women's models with diamond-studded bezels and dials. These watches demand around 1,400 USD.

Raymond Weil has been producing a fine selection of elegant men's watches under the Maestro name since 2010. These timepieces stand out with their exquisite dials with a sunburst guilloché finish or intricate skeletonization. In terms of color, you can choose from blue, brown, silver, or white.

An automatic Sellita caliber ticks away inside every Maestro watch. Raymond Weil's watchmakers modify each movement to suit the particular model's needs. While some are treated to a moon phase display, others are elaborately skeletonized and have perlage finishing.

The collection's top models are the three limited editions in honor of the Beatles: Sgt. Pepper, Abbey Road, and Fab Four. Each is limited to a run of 3,000 pieces and features the official Beatles logo on the dial and sapphire crystal case back. The dial of Sgt. Pepper resembles the cover of its namesake album, while the other two models have George, Ringo, Paul, and John's silhouettes at 4 o'clock.

Prices for Beatles watches sit around 1,300 USD. For the same amount, you could also purchase the Maestro with a moon phase display. Simple three-hand editions require an investment of at least 780 USD. Models with a skeletonized dial cost the most at roughly 1,800 USD.

Just for Women: Noemia and Shine

Raymond Weil offers two collections of timelessly elegant watches exclusively for women: Noemia and Shine. Named after Raymond Weil's granddaughter, the Noemia collection enchants with its beautiful lines, soft edges, and integrated stainless steel bracelet. You can choose from a 24, 32, or 36-mm case.

On the other hand, the Shine collection contains classic round timepieces that are 32 mm in diameter, as well as oval models measuring either 29 or 36 mm. Each watch comes with both a stainless steel bracelet and leather strap. By changing out the band, you can give your timepiece an entirely different look.

Both the Shine and the Noemia have central hands for the hours and minutes. Raymond Weil equips these watches with precise Swiss quartz movements. Another common feature is diamond-studded dials and bezels on certain models.

Prices for these elegant women's watches fall between 550 and 2,300 USD.

The Othello and Nabucco Collections

The Nabucco and Othello collections have been out of production for a number of years. However, many fans still count them among their favorite Raymond Weil watches. The Nabucco line contained some of the sportiest watches ever produced by this family business. There are diving watches, chronographs, and watches with a second time zone. With sizes ranging from 44 to 46 mm in diameter, these timepieces make their presence known on the wrist. Inside the case, you'll find modified automatic ETA calibers.

You can purchase a well-maintained three-hand model for under 1,100 USD. If you'd prefer a GMT watch, be sure to have around 1,300 USD on hand. Nabucco chronographs generally change hands for about 2,200 USD.

The Othello collection was home to men's and women's dress watches. While it was available in several designs over the years, the most notable examples have a round case, narrow bezel, and two vertical bars running from lug to lug down the front of the sapphire crystal. Raymond Weil combined this unique look with a minimalist dial in blue, red, or black. Beyond the brand and model names, Roman numerals at 6 and 12 o'clock are the only adornments on the dial.

Prices for these extraordinary watches range from around 550 USD for a stainless steel women's model with a quartz caliber to 4,500 USD for an automatic men's watch in 18-karat gold.

The History of Raymond Weil

Raymond Weil founded his company in 1976 at the height of the quartz crisis. His goal was to save traditional Swiss watchmaking while also lending it a new impetus. He had previously discovered his love of watchmaking while working for the family company Camy Watch Stroun Frères SA, a job he got through his old classmate Maurice Stroun.

Weil gradually expanded his distribution network across Europe, starting in the UK. In the 1980s, he entered the American, Emirati, and Indian markets. His son-in-law, Olivier Bernheim, joined the company in 1982 and helped guide expansion.

The company founded its own research and development department in Lancy, Switzerland in 1999. This would eventually result in their first in-house caliber, the RW1212. The numbers are a reference to Lancy's zip/postal code.

Olivier Bernheim took over as president and CEO after Raymond Weil's passing in 2014. As of 2016, Bernheim remains the company's president while his son, Elie Bernheim, has taken over the role of CEO.