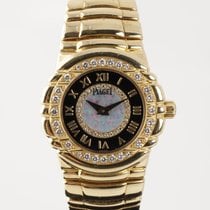 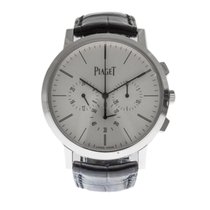 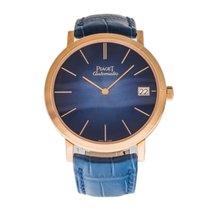 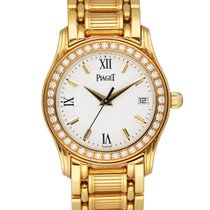 The storied Swiss watch manufacturer Piaget is famous for their extremely flat wristwatches. Top models are made of gold, studded with diamonds, and feature complications like a perpetual calendar, tourbillon, or minute repeater.

5 Reasons to Buy a Piaget Watch

"Always do better than necessary." That was the motto of Georges Édouard Piaget, who founded this watch company all the way back in 1874. This guiding principle still permeates Piaget's watch and jewelry collections to this day. For example, their top watches feature intricate in-house calibers with complications such as a perpetual calendar or minute repeater. They also craft high-precision tourbillon watches. Skeletonized watches and pieces encrusted with hundreds of diamonds complete this Swiss manufacturer's impressive catalog.

Piaget's most famous collection is the Altiplano. It contains both simple two and three-hand dress watches, as well as skeletonized pieces. The Polo series is made up of sporty, elegant timepieces that are perfect for the office or a day out on the town. This includes chronograph models. For stylish gold women's watches with diamonds, look no further than the Piaget Limelight and Possession collections.

How much do Piaget watches cost?

The Piaget Polo S with the reference number G0A41002 is an elegant automatic watch. Its cushion-shaped stainless steel case is 42 mm in diameter and features an integrated stainless steel bracelet. With 100 m (10 bar, 328 ft) of water resistance, this watch can even join you for a swim. There's a central set of hands for the hours, minutes, and seconds, as well as a date display at 6 o'clock. The second hand's counterbalance is a beautiful "P," the symbol of this Swiss company. Twelve applied indices sit atop a blue dial with horizontal guilloché engraving. The in-house caliber 1110P powers this timepiece and is visible through the sapphire glass case back. Piaget also offers this watch with a gray dial under reference number G0A41003. Both editions cost around 8,800 USD new and 7,500 USD pre-owned.

The ref. G0A42005 is a rather masculine stainless steel chronograph. Once again, a stainless steel bracelet with a folding clasp is integrated into the 42-mm cushion-shaped case. The anthracite dial with horizontal guilloché engraving features twelve applied indices filled with luminous material. In addition to the standard hour, minute, and second hands, this watch has a date display at 6 o'clock and two chronograph subdials. Piaget's iconic "P" forms the second hand's counterbalance. The automatic in-house caliber 1160P ticks away inside this timepiece. Its rotor is anthracite in color and engraved with the Piaget coat of arms. A sapphire glass case back offers a view of this movement at work. If you'd prefer this chronograph with a blue dial, Piaget has you covered with the ref. G0A41006. Prices for a never-worn chronograph sit around 12,500 USD. Fans of rose gold should enjoy the ref. G0A43011. This timepiece demands about 25,500 USD new.

The Limelight Collection: Fit for the Red Carpet

Piaget's Limelight collection is full of radiant timepieces for confident women. For example, the 32-mm ref. G0A41212 is an 18-karat white gold watch on a Milanese bracelet. Its round case is 7.4 mm thick and water-resistant to 30 m (3 bar, 98 ft), meaning it can withstand small splashes of water. The bezel and elongated lugs are studded with a total of approximately 1.75 carats of brilliant-cut diamonds. The silver-plated dial features anthracite Roman numerals that match the color of the bracelet and its integrated sliding buckle, which itself has a single 0.01-carat diamond. This two-hand watch gets its power from the in-house quartz 690P movement. Plan to spend around 31,000 USD on a mint-condition timepiece.

One of Piaget's most exquisite women's watches is the Altiplano ref. G0A39122. Its 34-mm white gold case is set with 69 brilliant-cut diamonds, each around 0.04 carats in weight. The ultra-flat manual Piaget caliber 838D powers this timepiece and has a white gold base plate. The intricately skeletonized movement is studded with another 219 0.6-carat diamonds. Eight 0.2-carat black sapphire cabochons conceal the movement's screws.

Each component – from the chamfered base plate and bridges to the sunburst guilloché finishes – is crafted by hand using traditional watchmaking methods. When you're not admiring the masterful movement, you can use the hour and minute hands to tell the time. This Altiplano is water-resistant to 30 m (3 bar, 98 ft), so you can leave it on while washing your hands. An alligator leather strap holds this watch securely on the wrist. Its pin buckle is also studded with 23 diamonds. Of course, such an exclusive timepiece doesn't come cheap. Piaget has set its list price at 91,500 USD.

Emperador: Cushion-Shaped with a Hybrid Movement

The first Piaget Emperador watch appeared in 1957. In celebration of its 50th anniversary, Piaget released a special edition Emperador in 2007. This and other early models shared the original's rectangular case shape. Today, the Emperador belongs to the Black Tie collection and has a cushion-shaped case similar to that of the Polo S. While the rectangular models measure a contemporary 32 x 41 mm, the more recent cushion-shaped editions feel outright enormous at 42 x 49 mm. However, thanks to Piaget's characteristic flat construction , these timepieces are still extremely comfortable on the wrist. In terms of material, you can choose from white or rose gold. Many versions feature diamonds and other gemstones on their cases, dials, and even movements.

Piaget equips these watches with in-house calibers, some of which are only a few millimeters thick. Despite this, they still boast a number of sophisticated complications, such as a tourbillon, second time zone, chronograph, or minute repeater. What's more, the Emperador Coussin XL 700P houses a revolutionary hybrid quartz-mechanical movement .

Simple two-hand models with a rectangular case serve as the entry point to this collection and can cost as little as 7,800 USD. Prices for cushion-shaped pieces with diamonds and complicated movements easily exceed 67,000 USD.

Possession: Round Watches with Diamonds

The Possession collection contains quartz-powered watches for sophisticated women. Piaget also creates jewelry under this name, a connection that's clearly reflected in these timepieces. Perhaps the most interesting feature of these watches is something they share with their sister line of jewelry: moveable components. In the case of the Possession watch, it's a freely rotating bezel .

These round timepieces are 29 or 34 mm in diameter and come in your choice of stainless steel, white gold, or rose gold. Possession watches have their lugs and crowns seamlessly integrated into their cases. Diamonds appear on many models. The leader on this front is the ref. G0A44083 with a total of 620 gems on its case, dial, and bracelet.

Beyond the diamonds, these timepieces have extraordinary dials. You'll find everything from white silver-plated dials with diamond indices to dials made of lapis lazuli, malachite, carnelian, or turquoise. Each watch is paired with a matching alligator leather strap.

Piaget Possession watches cover a wide price range. Prices for stainless steel models without diamonds start around 2,900 USD. However, those with diamonds on their cases often demand well over 22,500 USD.

At the age of 19, Georges Édouard Piaget opened a small watch workshop on his parent's farm in the Swiss town of La Côte-aux-Fées in 1874. He initially focused on producing movement components and high-precision calibers. Within a few years, he was supplying his creations to some of the Swiss watch industry's major brands.

Georges-Édouard's son, Timothée Piaget, took the company in a different direction in the 1920s. Under his leadership, they transitioned from a supplier to an independent watch manufacturer. Gérald and Valentin Piaget, grandsons of the company's founder, continued their father's work and had the family name registered as a trademark in 1943. Furthermore, the brothers began producing ultra-flat timepieces, a trend the business continues to this day.

Introduced in 1957, Piaget's manual caliber 9P marked a milestone in the manufacturer's history. At only 2 mm thick, it was among the thinnest movements of its time. Piaget followed this up in 1960 with the automatic caliber 12P, itself only 2.3 mm thick. This movement would go on to spend decades as the world's flattest automatic movement. Like many other brands, Piaget turned to quartz movements and watches in the 1970s. The caliber 7P followed in its mechanical counterparts' footsteps as one of the smallest of its kind.

Today, Piaget belongs to the luxury goods conglomerate Richemont, which also owns Cartier, A. Lange & Söhne, and IWC. Chabi Nouri has served as the company's CEO since 2017 and is one of few women in leadership positions in the watch industry. Before taking over as CEO, she served as Piaget's International Managing Director of Sales and Marketing.