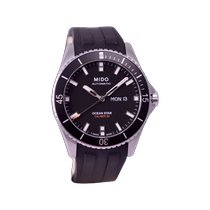 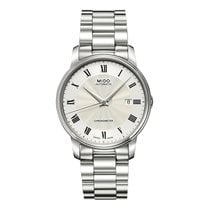 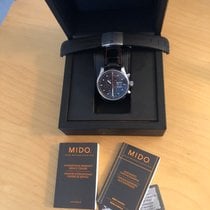 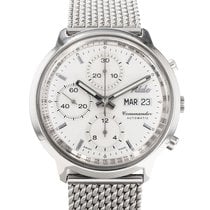 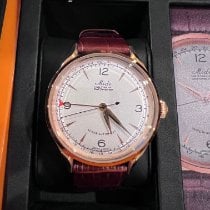 Mido has been producing innovative timepieces at affordable prices since 1918. Classic models include the Multifort, Ocean Star, and Baroncelli. Top models are chronometer certified and have an 80-hour power reserve.

5 Reasons to Buy a Watch from Mido

Combining Quality and Style Since 1918

In Spanish, mido means "I measure." In 1918, company founder Georges Schaeren selected this name for his new business because he felt it reflected a desire for technical innovation and precise design. Mido's early years coincided with the advent of the automobile industry. It was, therefore, natural that the manufacturer specialized in wristwatches inspired by radiator grills used by early automakers.

One of the Swiss company's earliest successes came in 1934 in the form of the Multifort. This model remains a staple of the Mido catalog to this day. The release of the Ocean Star followed in 1959 and was a smash hit. It features a single-shell case and a crown sealing system that would later become known as the Aquadura. At the time, the Ocean Star was one of the most robust and water-resistant watches on the market. Today, the Ocean Star's direct descendants are found in the Commander collection, while the Ocean Star name has been given to a new series of diving watches.

In honor of the Baroncelli collection's 30th anniversary in 2006, Mido released a new collection of classic, minimalist timepieces inspired by string instruments. The addition of the Belluna collection in 2008 marked Mido's first line of Art Deco watches.

Mido exclusively produces their cases out of high-quality, corrosion-resistant 316L stainless steel. Certain models also receive a PVD coating. The company outfits each timepiece with a proven ETA base caliber that they modify in house. The most common movements are the Mido 60 and Mido 80. The number stands for the movement's power reserve: 60 or 80 hours, respectively. You can find a chronometer-certified version of the caliber 80 with a silicon balance spring in various "Super Precise" Ocean Star and Multifort models.

How much do Mido watches cost?

The three-hand watches in the Mido Commander collection bear a strong resemblance to the original model from 1959. The ref. M014.430.11.051.80 is a 40-mm stainless steel watch with a depth rating of 50 m (5 bar, 164 ft). The Mido caliber 80 ticks away inside this timepiece. This movement is based on the ETA C07.621 and has an 80-hour power reserve. There are central hands for the hours, minutes, and seconds, as well as a day-date display at 3 o'clock. Applied indices with small SuperLuminova dots sit atop the black dial.

Paired with a stainless steel bracelet and butterfly clasp, this watch sells for about 780 USD on Chrono24. Mido's list price for the same timepiece is 920 CHF (approx. 930 USD).

Features of the Mido Commander Datoday

The Mido Commander collection also contains a few chronograph models. One example is the 42.5-mm ref. M016.414.11.041.00. Its satin-brushed stainless steel case features a sapphire crystal case back and is water-resistant to 50 m (5 bar, 164 ft). The automatic caliber 60, based on the ETA A05H21, comes with a chronograph function, a 60-hour power reserve, and a day-date display at 3 o'clock.

The blue dial has applied indices half-filled with luminous material. Central hands display the hours, minutes, and chronograph seconds. There are also chronograph counters at 6 and 12 o'clock, as well as a small seconds at 9.

Mido pairs this chronograph with a brushed stainless steel bracelet. While its official list price is 1,960 USD, you can find the same model in mint condition for about 1,800 USD on Chrono24.

Features of the Commander Chronograph

The Mido Multifort collection is home to a diverse selection of three-hand watches, chronographs, and watches with a GMT function. The ref. M005.929.11.031.00 with a GMT function has a fourth central hand that points to a city disc around the outer edge of its dial. You can set the second time zone using the additional crown. The 42-mm case is made of brushed stainless steel and water-resistant to 100 m (10 bar, 328 ft). The automatic Mido caliber 1193 powers this timepiece. This movement is a modified version of the ETA 2893-2.

This GMT watch has a silver dial with applied line indices and Arabic numerals. Mido mounts the timepiece on a satin-brushed stainless steel bracelet and sells the final product for 1,250 USD. Prices for never-worn editions begin around 890 USD on Chrono24.

Features of the Multifort GMT

You don't have to be a thrill seeker to wear the ref. M025.627.36.061.10. This 44-mm chronograph has a PVD-coated case and is water-resistant to 100 m (10 bar, 328 ft). Sapphire crystal protects both the front and back of the watch, offering a view of the automatic Mido caliber 60 at work from behind. The movement is based on the ETA A05.H31 and provides this timepiece with a 30-minute counter at 3, date display at 6, and small seconds at 9 o'clock. There are central hands for the hours, minutes, and chronograph seconds. Dot indices mark the hours on the black dial, with the exception of an Arabic numeral at 12 o'clock. The bezel features a tachymeter scale for calculating speeds in conjunction with the chronograph second hand.

A brown leather strap keeps the watch securely on the wrist. The Adventure Chronograph has a list price of 2,130 USD. However, you can purchase a new model on Chrono24 for about 1,600 USD.

Features of the Multifort Chronograph

The Ocean Star collection contains several chronometer-certified diving watches, including the ref. M026.608.11.041.00. This 43.5-mm model has a stainless steel case that is water-resistant to 600 m (60 bar, 1,969 ft). The automatic Mido caliber 80 COSC Si ticks away inside this timepiece. The movement boasts an 80-hour power reserve and exceptional accuracy, as evidenced by its chronometer certificate. The blue gradient dial features luminous applied indices. The hour, minute, and second hands also glow in the dark, allowing the wearer to easily tell the time no matter how deep they dive.

One of the watch's most interesting features is its ceramic diving bezel with luminous numerals. A brushed stainless steel bracelet with a folding clasp completes the look. This model sells for roughly 1,600 USD new. The same timepiece has a list price of 1,700 USD on Mido's website.

Features of the Mido Ocean Star

How much does the Mido Baroncelli cost?

The Mido Baroncelli collection sets itself apart with its classic designs. The ref. M027.408.11.041.00 , for example, is a modest 40 mm in diameter. Its stainless steel case is water-resistant to 30 m (3 bar, 98 ft), meaning you can leave this watch on while washing your hands, but should take it off before showering. Sapphire crystal with an anti-reflective coating protects the textured blue dial from the elements. In terms of functionality, this timepiece has a date display at 3 o'clock in addition to its three central hands.

Mido outfits this model with their chronometer-certified caliber 80. Based on the ETA C07.621, the movement features a silicon balance spring and an 80-hour power reserve. A sapphire crystal case back offers a stunning view of the automatic movement at work. This particular model comes on a stainless steel link bracelet and has a list price of 1,190 USD.