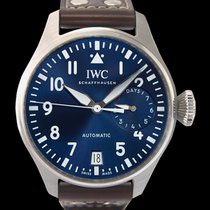 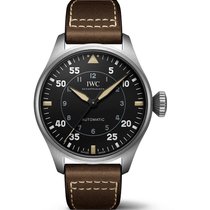 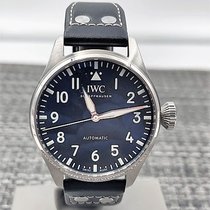 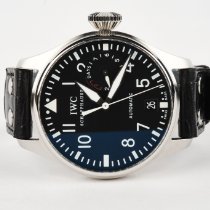 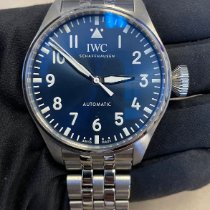 IWC Big Pilot's Watch: A Giant of the Skies

The Swiss luxury watch manufacturer IWC Schaffhausen is most famous for their Pilot’s Watches collection. The Big Pilot's Watch series sets itself apart as the direct descendant of the "Große Fliegeruhr" (big pilot's watch) from 1940. At that time, IWC, Stowa, Laco, A. Lange & Söhne, and Wempe were the only five manufacturers producing watches for the German Air Force.

The original was 55 mm in diameter. While the 46-mm size of the current Big Pilot's Watch series is much smaller, it still more than lives up to its name. Its large, conical crown also dates back to the first edition and is easy to operate wearing gloves.

Then as now, the Big Pilot's greatest strength is its superior readability. This is a result of IWC choosing the "Baumuster A" (type A) for its design. Luminous sword hands, indices, and sans-serif Arabic numerals all contrast beautifully against the dark dial. Another defining feature is the pilot's triangle at 12 o'clock, which makes it easy to tell up from down at a glance.

How much does a Big Pilot's Watch cost?

Prices for the most affordable IWG Big Pilot's Watch models begin around 12,000 USD. Watches in this price range include the stainless steel Big Pilot’s Watch Classic, the titanium Heritage edition, and the Top Gun Miramar in black ceramic.

Be sure to have an additional 4,900 USD on hand for a Spitfire edition with an annual calendar or the "Mission Accomplished" with an oversized date and bronze case. Timepieces with more intricate complications, such as the Spitfire Perpetual Calendar and Top Gun Rodeo Drive, demand between 30,000 and 34,500 USD.

Introduced in 2002, the Big Pilot's Watch Classic bears the strongest resemblance to the original model from the 1940s. Its 46.2-mm case is made of stainless steel, and its matte black dial follows the design specifications of Baumuster A (type A). This design first appeared in the early 1940s, when the former German Imperial Ministry of Aviation set standards for German pilot's watches. However, unlike their historical predecessors, current models feature a date display at 6 and a power reserve indicator at 3 o'clock that lets you know how much of the Big Pilot's Classic's seven-day power reserve remains. The in-house caliber 52110 powers these modern timepieces. Previous editions used the calibers 5011 and 51111, both of which also have seven-day power reserves.

Heritage Models in Titanium or Bronze

The Heritage models are a nice alternative to the Classic series. They are the same size as the Classic and have the same technology and dial design but are made of titanium or bronze. The bronze Big Pilot's Watch Heritage debuted in 2019. Prices for the titanium editions sit around 13,000 USD. Only 1,500 copies exist of the bronze version, which sells for roughly 13,500 USD.

IWC used to offer the Heritage as a 48-mm model and a historically accurate 55-mm timepiece. Both are made of titanium and are easily recognizable by a small seconds dial at 6 o'clock. Each houses a manual caliber: The 59215 with an eight-day power reserve powers the Heritage 48, while the 98300 with a 46-hour power reserve ticks away inside the Heritage 55. These giants change hands for around 13,500 USD in good condition.

The Big Pilot’s Watch Big Date Spitfire also goes by the name "Mission Accomplished" edition. Its bronze case is 46.2 mm in diameter and holds the in-house caliber 59235. This manual movement boasts an impressive 192-hour power reserve and features central hour and minute hands. There's also a small seconds at 6 and an oversized date at 12 o'clock. Like all bronze Spitfire models, this watch comes with a dark green dial. IWC only crafted 500 copies of this timepiece, which sells for as little as 17,500 USD on Chrono24.

In addition to the power reserve indicator at 3 o'clock, the Big Pilot's Watch Annual Calendar Spitfire features a small seconds dial at 9 and an annual calendar. The calendar is composed of a date display flanked by windows for the week and month at 12 o'clock. It can even account for whether a month is 30 or 31 days in length and only has to be manually corrected at the end of February each year. The in-house caliber 52850 provides this watch with all this functionality. The slate-gray sunburst dial and white numerals and indices pair beautifully with the satin-brushed stainless steel case. A polished bezel rounds off this refined timepiece. You can purchase this watch starting at around 17,000 USD in mint condition.

IWC introduced a new member to the Spitfire family at SIHH 2019: the Big Pilot's Watch Perpetual Calendar Spitfire. As its name suggests, this watch comes with a perpetual calendar. This sophisticated mechanism automatically adjusts to the correct month length and even recognizes whether or not it's a leap year. It won't need manual correction until the year 2100. What's more, this timepiece has a special moon phase display at 12 o'clock that can depict the correct moon phase in both the Northern and Southern Hemispheres simultaneously. A sapphire crystal case back offers a stunning view of the in-house caliber 52615 at work.

Beyond being a technological marvel, this timepiece is also a feast for the eyes. Its dark olive green dial and bronze case are in perfect harmony. The hands and moon phase are also bronze, lending this watch a particularly refined feel. This treasure sells for roughly 34,500 USD.

The Big Pilot's Watch Spitfire was part of IWC's catalog until 2019. This timepiece sets itself apart from its sister models in the Classic series with its 18-karat rose gold case and slate-gray (known at IWC as "Ardoise") sunburst dial. You can purchase this watch for around 27,000 USD.

IWC's designers decided on a 18-karat rose gold case for the Big Pilot's Watch Annual Calendar Edition Antoine de Saint-Exupéry. From a technological perspective, this timepiece is identical to the Annual Calendar Spitfire and uses the same caliber. However, the numerals on its dial are much bolder. It's also worth flipping the watch over to see the in-house caliber 52850 with a rotor in the form of a P-38 Lightning. Saint-Exupéry undertook his final reconnaissance mission in this aircraft in 1944. Limited to a run of 250 pieces, this timepiece will set you back about 26,500 USD.

The Big Pilot’s Watch Perpetual Calendar Antoine de Saint-Exupéry falls in a similar price range. Thanks to the in-house caliber 52610, this timepiece boasts both a perpetual calendar and a moon phase display. You can call this stainless steel watch your own for around 26,000 USD.

The Edition "Antoine de Saint-Exupéry" series is also home to several three-hand models. These watches are technologically identical to the Big Pilot's Watch Classic but feature the typical brown Saint-Exupéry dial. Prices for these timepieces range from roughly 12,000 USD for stainless steel model to 27,000 USD for watches with a rose gold case.

IWC outfitted the three-hand version of the Big Pilot’s Watch Edition "Le Petit Prince" with the caliber 52110. You'll find this same movement in the Classic series. Thus, "Le Petit Prince" features a power reserve indicator at 3 and a date at 6. It also comes with a 168-hour power reserve. The dial is blue, and the stainless steel case back is engraved with an image of the little price himself. Be sure to set aside around 12,500 USD for one of these timepieces.

If you're looking for more refinement and exclusivity, you might consider the Big Pilot's Watch Constant-Force Tourbillon Edition "Le Petit Prince" introduced at SIHH 2019. The manual caliber 94805 ticks away inside its case and lends this timepiece its power reserve indicator, moon phase display, and tourbillon with IWC's constant-force mechanism. This technology provides a constant and even flow of energy between the mainspring and the swing and escapement systems. Both the rose gold and platinum editions had limited production runs of ten pieces and demand around 280,000 USD.

The Top Gun series is the most modern branch in IWC's family of pilot's watches. The most notable detail of these timepieces is their ceramic cases. You'll also find Big Pilot's watches in this line. One current example is the Big Pilot's Watch Perpetual Calendar Edition Rodeo Drive. Presented at SIHH 2019, this watch has much in common with its counterpart in the Spitfire series: It uses the same caliber 52615 and boasts a perpetual calendar, a moon phase display for the Northern and Southern Hemispheres, and a power reserve of seven days. Its matte black ceramic dial is especially scratch-resistant and gives the watch a modern touch. This ceramic watch changes hands for roughly 30,500 USD. You can save about 1,200 USD by purchasing the previous model with the caliber 51614.

The Big Pilot's Miramar is a particularly popular Top Gun model. Its black ceramic case is 48 mm in diameter, making it 2 mm larger than the other watches in this series. Its power comes from the caliber 51111 with a seven-day power reserve, a power reserve indicator at 3 o'clock, and a date display at 6. The khaki dial follows the standards of the historical Baumuster B (type B). That means that the scale around the dial's edge is solely for the minutes, while the hours appear on a smaller circle in the middle of the dial. Prices for the Miramar sit around 12,000 USD.

The Big Pilot's Watch Top Gun is also available in the classic Baumuster A (type A) design with a black dial. Its second hand has a bright red tip. You can call one of these watches your own for around 13,500 USD.