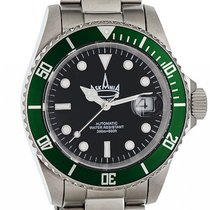 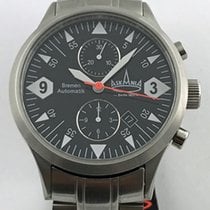 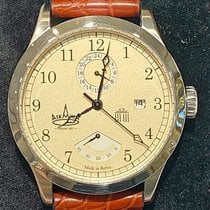 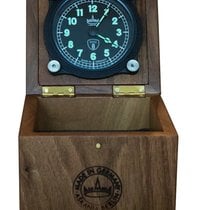 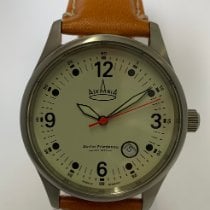 Askania AG has a strong connection to its past. Their watches embody Berlin, aviation, and seafaring. There's the Tegel, which is dedicated to the capital city's main airport, and the Elly Beinhorn, which gets its name from the record-breaking pilot.

5 Reasons to Buy a Watch from Askania

Although Askania AG was first reestablished in Berlin in 2004, it can trace its roots all the way back to 1871. The various collections pay homage to the brand's diverse history and take their inspiration from airports, famous figures, or the city of Berlin itself. Askania's catalog includes everything from pilot's watches and chronographs to classic timepieces with a modern touch. They also produce watches for more formal occasions: The C. Bamberg is a beautiful Art Deco watch with a rectangular case and is dedicated to the company's founder.

Askania imports their movements from suppliers like Miyota and ETA and then refines them in-house both by hand and using machines. For example, this might include adjusting a movement's accuracy. This Berlin-based company often crafts its watch cases out of type 316L stainless steel, which is also used in the aviation industry. Most Askania watches are worn on a leather strap, though there are also some models with a stainless steel bracelet. Sapphire glass protects the dials and is extremely scratch resistant, with a rating of 9 on the Mohs hardness scale. This puts it just behind diamond, the hardest naturally occurring mineral, which tops the scale with a 10.

How much do Askania watches cost?

Askania pilot's watches are inseparable from the brand's long history with the aviation industry, and their designs are often inspired by historic aircraft. The Bremen collection gets its name from the Junkers W 33 – the first plane to complete a non-stop flight across the Atlantic from east to west. This series contains three-hand watches with day and date displays, as well as chronograph models with a small seconds and 30-second counter. The ETA Valjoux 7750 forms the basis of the caliber used in timepieces with a stopwatch function and features a date display at 4 o'clock. Prices for a chronograph sit around 2,300 USD, while the three-hand versions sell for about 1,700 USD.

The Taifun collection is also home to three-hand timepieces and chronographs. The large crown and luminous Arabic numerals clearly mark these models as pilot's watches. A coating of luminous material on the hands makes telling the time in a dark cockpit a breeze. The collection's name also has a deeper meaning: The record-breaking stunt pilot, Elly Beinhorn, lovingly referred to her Messerschmitt Bf 108 airplane by the nickname "Taifun" or "typhoon."

You can purchase a never-worn three-hand model with a black or cream-colored dial for as little as 1,100 USD. The addition of a rotatable bezel with a minute scale raises that price by some 680 USD. Plan to spend anywhere from 3,300 to 4,000 USD on a chronograph with a rotatable bezel.

Askania has a special relationship with the city of Berlin, which is why this watch manufacturer has designed and named several models after famous locations in the German capital. The Tegel collection pays homage to the city's main airport. These Bauhaus watches are as functional and straightforward as their namesake. The Arabic numerals for the hours and minutes are purposely kept small and inconspicuous, while the narrow baton hands feel equally understated. This is all paired with a date display at 3 o'clock. The most harmonious models have a black dial. Quartz editions change hands for about 790 USD, while their automatic counterparts demand around 1,000 USD.

The Tempelhof collection also gets its name from an airport. In the late 1940s, Tempelhof cemented its place in history as the site of the Berlin Airlift. The airport's blueprint had a major influence on how Askania designed the dial, with the hour indices resembling the building's blocky layout. Automatic Tempelhof chronographs even come with a tachymeter scale you can use to calculate speed. Once again, the ETA Valjoux 7750 works its magic beneath the dial. This sporty chronograph requires an investment of around 2,300 USD.

Elegant Watches Inspired by the City

The Alexanderplatz collection offers a more elegant touch. These three-hand watches are available with a date display or small seconds dial. The dial of the ref. ALE-2721 has a trapezoidal guilloché pattern inspired by Berlin's famous Fernsehturm (TV tower). An outer ring with a sunburst gradient surrounds this inner dial. The blue color scheme represents the sky reflecting off the tower's glassy surface. In mint condition, these Alexanderplatz watches sell for about 1,700 USD. Never-worn models with Roman numerals cost around 1,400 USD. If you're looking for a women's watch, the Alexanderplatz is also available with a small seconds dial and gem-studded bezel for about 1,000 USD.

Askania has dedicated the Quadriga collection to what is perhaps Germany's most famous monument: the Brandenburg Gate. Every year sees the release of a new model in honor of this iconic structure. In this collection, you'll find watches of all different shapes, from round or curvy to rectangular models. The Quadriga ref. QUA-1151 is a particularly well-crafted timepiece. The dial of this manual stainless steel watch strongly resembles that of the Lange 1 from A. Lange & Söhne. The QUA-1151 is limited to a run of 139 pieces. What makes it truly unique is its dual movements, which allow it to display two separate times at once. Each movement is controlled by its own crown. If you're lucky, you'll find this rare Quadriga for around 4,000 USD.

The Elly Beinhorn collection is dedicated to the famous German record-setting stunt pilot. Beinhorn made headlines with her long-haul flights, such as a solo flight to Africa in 1931 and her circumnavigation of the globe in 1932, during which she flew over 19,000 miles (31,000 km). She also became the first person to fly over two continents in 24 hours. This journey even included sections where she had to fly blind.

Elly Beinhorn was one of a small group of female pilots in the 1930s. However, she was still able to prove herself in the male-dominated world of aviation. Fittingly, the collection dedicated to her is geared toward confident, sporty women. These timepieces are 35 mm in diameter and powered by a quartz or automatic movement. The tachymeter scale matches the red or green strap, while a set of sword hands underscores the sporty feel of these watches. Mother-of-pearl dials lend Elly Beinhorn pieces a feminine touch. You can purchase a quartz-powered Elly Beinhorn for around 1,000 USD. New automatic models sell for about 1,400 USD.

If you're a fan of Art Deco, you should check out the C. Bamberg collection. It pays tribute to Askania's founder, and the rectangular models feel like something straight out of the 1920s. These timepieces have some design elements in common with the Cartier Tank and the Jaeger-LeCoultre Reverso. You can choose between Roman and Arabic numerals, both of which fit well with the C. Bamberg's style. Mint-condition pieces with an automatic movement demand around 1,500 USD.

The 42-mm round C. Bamberg models cost about the same. They are a modern adaptation of the pocket watches Askania produced for Germany's Imperial Navy in 1900. A railroad minute scale highlights this history, as this feature is commonly found on marine chronometers. In fact, this type of minute scale was deemed necessary for navy watches by the German naval observatory. Dauphine hands provide these timepieces with a sense of elegance, making them a stylish choice to pair with evening wear.

The History of Askania and Its Connection to the Film Industry

Askania can trace its roots all the way back to 1871 when Carl Bamberg, a trained precision engineer, founded his workshop for precision instruments in Berlin. Bamberg's work quickly earned him a stellar reputation, and he began receiving contracts from the German Imperial Navy and observatories. His company expanded its portfolio over the years, eventually adding the production of compasses, chronometers, and dashboard instruments to its repertoire. This resulted in major successes for Askania in the aviation industry. Their instruments appeared in many aircraft in the 1920s and were even used by companies like Lufthansa.

That being said, Askania has as close a connection to the film industry as it does to the shipping and aviation industries. They were already producing film cameras in 1920 and developed the first portable shoulder-mounted camera in 1935. Cinema projectors also appear on Askania's long list of accomplishments. In a nod to their history, Askania created its own awards to honor achievements in sports and acting, as well as lifetime achievements and up-and-coming performers, in 2008. These awards are presented every year during the opening week of the Berlin International Film Festival, attracting many famous faces to the red carpet.