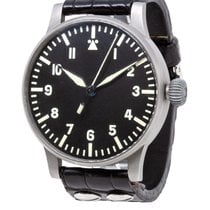 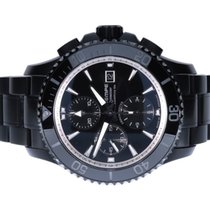 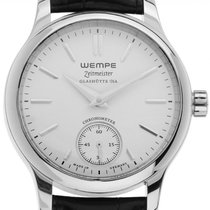 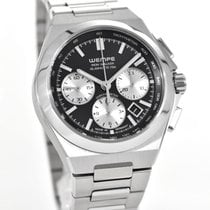 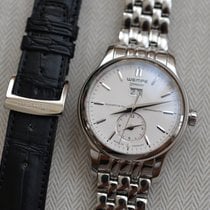 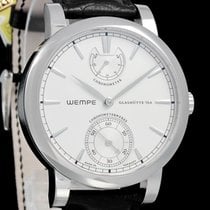 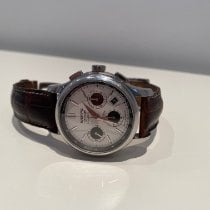 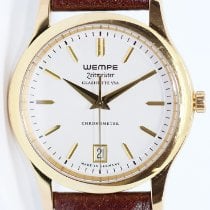 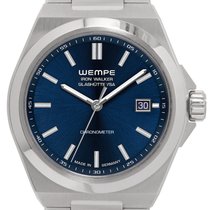 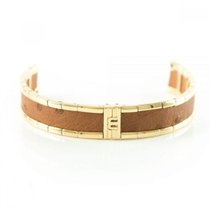 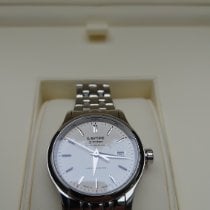 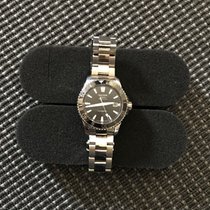 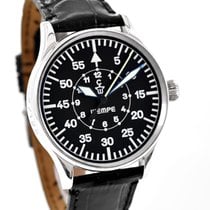 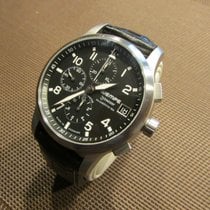 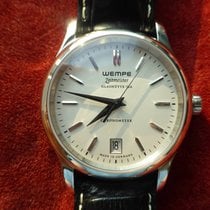 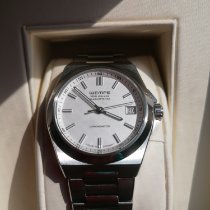 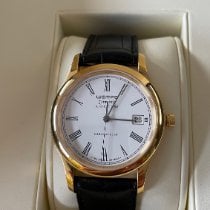 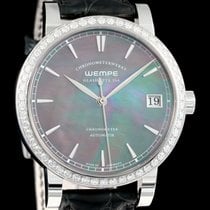 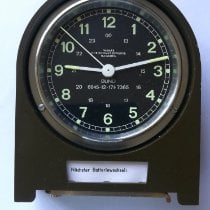 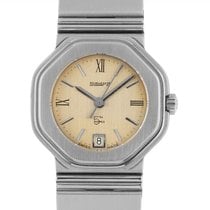 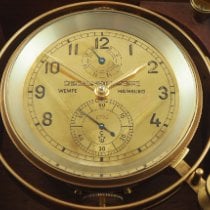 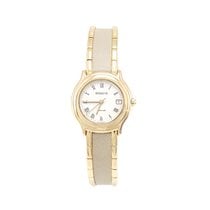 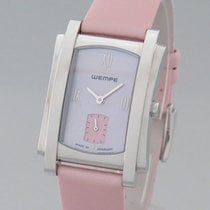 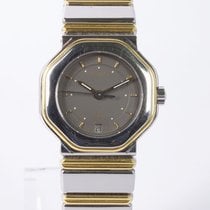 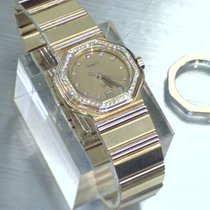 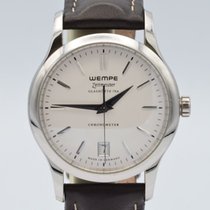 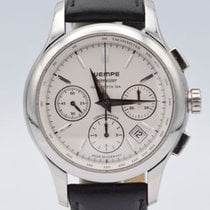 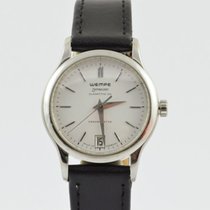 The German watch manufacturer Wempe Glashütte has each of their watches certified as a chronometer. In-house calibers power the watches in the Chronometerwerke collection. Top models are made of platinum and feature a tourbillon.

5 Reasons to Buy a Watch from Wempe Glashütte

Watches from Wempe Glashütte are known for their exceptional accuracy and quality. Based in the small Saxon town of Glashütte, Germany, this manufacturer specializes in chronometers and has a long history of crafting remarkably accurate timepieces to look back on. They even have each of their watches certified as a chronometer in Germany.

Wempe splits their wristwatches into two collections: Chronometerwerke and Zeitmeister. The latter contains sporty yet elegant watches powered by Swiss calibers. The manufacturer modifies each caliber and outfits them with their in-house fine adjustment system. Depending on the movement, other functions may also be added such as a stop-seconds mechanism. This collection includes chronographs, diving watches, and pilot's watches, as well as quartz-powered women's watches.

How much do watches from Wempe Glashütte cost?

Prices for Models in the Chronometerwerke Collection

The Chronometerwerke collection contains Wempe's masterpieces. Their designs are classic and focus on the essentials; for example, the model with a small seconds only has three hands and delicate line indices. The subsidiary seconds dial is located at 6 o'clock. The in-house manual caliber CW3.1 ticks away inside the stainless steel or 18-karat yellow gold case. Thanks to the stop-seconds mechanism, you can set this chronometer to the exact second. The stainless steel model has a list price of 5,950 euros (approx. 6,800 USD), while the gold edition officially costs 12,450 euros (approx. 14,000 USD).

The Wempe Chronometerwerke Power Reserve takes a simple manual watch with a small seconds and adds a power reserve indicator at 12 o'clock. This indicator lets you know how much of the watch's 42-hour power reserve remains and when you need to wind it. The timepiece is available in stainless steel or 18-karat yellow gold. You can choose from line indices, Arabic numerals, or Roman numerals on the light-colored dial. Be sure to set aside around 6,800 USD for a stainless steel timepiece. The list price for gold models comes in at about 14,000 euros (approx. 16,000 USD).

Wempe Glashütte also makes an automatic watch for the Chronometerwerke collection. This round, 41-mm watch comes in stainless steel or gold. The dial's design is understated, tidy, and elegant, with a railroad minute scale, applied indices, and leaf-shaped hands. The in-house caliber CW4 powers this timepiece and features a Glashütte three-quarter plate, tempered blue screws, and finely decorated components. Its off-center rotor is particularly striking. Plan to spend around 7,900 USD on this automatic watch in stainless steel. The gold model costs about 15,000 euros (approx. 17,000 USD) according to its list price.

How much do barrel-shaped Wempe Glashütte watches cost?

Wempe's most exquisite timepiece is a limited edition tourbillon watch. It is limited to a run of 25 watches and has a list price of 79,500 euros (approx. 90,000 USD). As it has a tourbillon, the entire swing and escapement systems are located in a cage, which makes a full rotation on its axis once every minute. This rotation compensates for any gravity-related deviations and guarantees especially high accuracy. Wempe's tourbillon watch is made of 950 platinum and features a silver-coated dial and Arabic numerals at 3, 9, and 12 o'clock. The tourbillon itself is located at 6 o'clock and is visible through the sapphire glass from both the front and back. The in-house manual movement has a 40-hour power reserve and sits inside a 51 x 40.90 x 13.70-mm case.

If you're a fan of large barrel-shaped watches and can do without a tourbillon, you may enjoy the Wempe Chronometerwerke XL. You can choose between a stainless steel or yellow gold case, each with a view of the in-house caliber CW1 through the case back. Wempe also developed this caliber with NOMOS. It even boasts an 80-hour power reserve thanks to its double barrels. The Chronometerwerke XL has a list price of 4,250 euros (approx. 4,800 USD) in stainless steel and 9.850 euros (approx. 11,000 USD) in gold.

Prices for Watches in the Zeitmeister Collection

If you decide on a watch from the Zeitmeister series, then you're sure to find a chronometer with incredible value for money . Wempe offers a watch for every taste in this collection. The most affordable models have quartz movements. The main advantage of a quartz watch is obvious: It's much more precise than a mechanical timepiece. Wempe's quartz watches are mostly targeted toward women and are stainless steel timepieces with either a leather strap or steel bracelet. There are also gold-plated watches adorned with diamonds. Both versions are available in diameters of 31 or 38 mm. The most affordable quartz watches sell for under 1,100 USD.

Automatic watches with chronograph functions are just one highlight of the Zeitmeister collection. Wempe utilizes the ETA Valjoux 7753 caliber, a modification of the 7750. The Valjoux 7750 is considered the most successful automatic chronograph movement in history. The 7753 differs from the 7750 in that it has its minute counter at 3 o'clock instead of 12.

Wempe also uses the Valjoux 7751 in several models. This caliber features a moon phase indicator and an annual calendar in addition to the chronograph function. An annual calendar displays the current day, date, and month. In months with less than 31 days, as is the case five times a year, the calendar has to be manually corrected. You can do this via the crown and quick date correction on the 7751. In terms of design, Wempe chronographs are sporty-elegant. They combine classic materials, such as crocodile leather straps, with sporty features like tachymeter scales. Tachymeter scales are used to measure speed over a certain distance.

The Wempe Zeitmeister Sport Chronograph also features a tachymeter scale, but comes on a stainless steel link bracelet instead. These timepieces are available with a silver or black dial. The case is water resistant to 100 m (10 bar, 328 ft). This chronometer has a list price of 2,975 euros (approx. 3,400 USD). If you need a watch with a unidirectional diving bezel and water resistance to 300 m (30 bar, 984 ft), you should take a closer look at the Wempe Zeitmeister Sport Diver's Chronograph . The Sellita caliber SW500 ticks away inside this timepiece and is almost identical to the Valjoux 7750. The bezel's ceramic inlay means it is especially scratch resistant. This diving chronograph is 45-mm in diameter and officially costs 3,375 euros (approx. 3,800 USD).

How much do Wempe's pilot's watches cost?

The Zeitmeister collection also includes classic pilot's watches. These timepieces feature black dials with luminous hands, Arabic numerals, and markings. This makes the time easy to read, even in the dark. The series' top model is made of ceramic, 44 mm in diameter, and comes with a chronograph function. The Valjoux 7753 caliber is responsible for displaying and measuring the time. The list price for the solid black pilot's watch comes in at 3,600 euros (approx. 4,100 USD).

The classic three-hand pilot's watches are the most affordable. The 38-mm edition with a date display and automatic caliber has an official price of only 1,400 euros (approx. 1,600 USD). Its larger, 45-mm sister model comes in a stainless steel case and costs about 800 USD more.

Wempe Glashütte also produces complicated watches. The most complicated features a chronograph, moon phase indicator, and calendar. Wempe outfits these watches with the ETA Valjoux 7751 caliber. This stainless steel watch is available on a steel bracelet or crocodile leather strap. Both versions sell for around 4,000 USD new.

The Wempe Zeitmeister World Time is the perfect watch for frequent travelers. This model displays 24 time zones on a ring around the edge of the dial. A 24-hour disc rotates in the dial's center. According to its list price, this stainless steel watch requires an investment of 1,850 euros (approx. 2,100 USD).

Wempe and the Glashütte Observatory

Wempe Jewelers has a long tradition of precision timekeeping. In 1938, the company bought Hamburger Chronometerwerke GmbH from shipbuilders based in Bremen and Hamburg, Germany. That company was founded in 1905 with the intention of ending German dependence on English marine chronometers by manufacturing their own.

At the time, England was the leading producer of marine chronometers. Sailors required incredibly precise clocks to determine their position. Directional errors and shipwrecks were common until the 18th century. This all changed in 1759, when the Englishman John Harrison created the first chronometer, allowing sailors to determine their longitude and thus their exact position.

Wempe laid the foundation for their own chronometer production with the purchase of the Hamburger Chronometerwerke GmbH. Shortly thereafter, Wempe and Otto Lange, the grandson of Ferdinand Adolph Lange, began working together. F. A. Lange had founded Glashütte's watch industry. Wempe and Otto Lange envisioned founding a research and training facility for watchmakers in the Glashütte Observatory . However, the Second World War and the subsequent splitting of Germany prevented them from realizing their plan.

Together with the Office of Consumer Protection of Thuringia and the Office for Weights and Measures of Saxony, Wempe founded the only independent chronometer testing institute in Germany in 2006. Since then, watches can also receive a chronometer certificate in Germany. Wempe acquired the observatory and its grounds in 2005 and have been producing their Chronometerwerke and Zeitmeister collections on the observatory grounds since 2006. Today, Wempe repairs and services watches from all major brands in their workshop, the largest retail workshop in Europe.

DIN 8319 is the German standard for testing the accuracy and precision of chronometers. The standard is the same as the international ISO 3159 standard used in Switzerland. However, there is one important difference: In Germany, the entire watch is tested . In Switzerland, just the caliber is tested and receives certification. The movement is placed in the case only after it has been certified.

The DIN 8319 standard requires the watches to pass 15 days of testing. The tests take place in five different positions: dial up, dial down, crown left, crown up, and crown down. During these 15 days, the watch's mean deviation cannot exceed -4/+6 seconds. The watches undergo these tests at 8°C (46°F), 23°C (73°F), and 38°C (100°F), as well as at 50% humidity. After 24 hours, the deviation is measured. Furthermore, a machine winds the movements. If the movements have any complications, they're activated on the 10th day. This tests the impact of the complications on the watch's accuracy.

Wempe: The History of a Family Business

Wempe traces its history back to 1878, when Gerhard D. Wempe started his own small workshop in Northern Germany. There, he repaired and sold used watches. He put a lot of effort into his display windows, bringing in more customers than his competitors. His success earned him the nickname "Gülden Gerd" (Golden Gerd). Today, uniform store design and decorative display windows remain hallmarks of Wempe.

Wempe expanded to Oldenburg, Germany in 1894, where they opened a second store. That same year, Wempe traveled to Switzerland and began selling more expensive watches. Thirteen years later, Wempe opened a store in Hamburg, where the head office is still located.

After the death of Gerard D. Wempe in 1921, his son Herbert took over the company. Following in his father's footsteps, he invested in the future and developed a uniform store design for all Wempe stores. Unusual at the time, this is now known as "corporate identity." He also expanded their customer service. Wempe repairs all watches, even those from other companies such as A. Lange & Söhne, Rolex, and Patek Philippe.

Hellmut Wempe took over the company in 1963. Under his leadership, Wempe grew into an international company with 29 stores. Aside from stores in Berlin, Frankfurt, and Cologne, they also opened one on New York's Fifth Avenue. Following the opening of their New York location, Wempe opened stores in Paris, London, Vienna, and Madrid. Wempe even has their own boutique on the cruise ship "MS Europa."