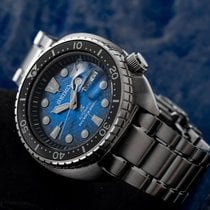 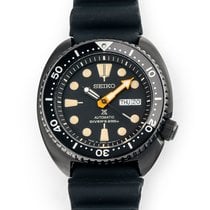 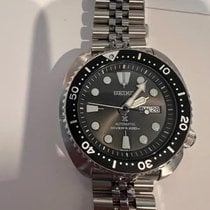 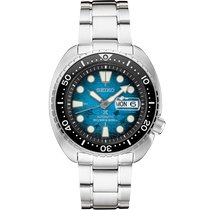 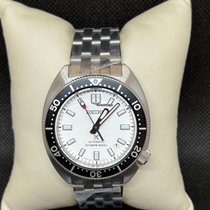 The cushion-shaped Turtle is one of Japanese watchmaker Seiko's most remarkable diving watches, and one of the world's most popular automatic divers. The 1970 Diver's Re-Creation Limited Edition, or King Turtle, is a particular gem in the series.

Under the Sea: The Seiko Turtle

When it comes to nicknames, followers of the Japanese manufacturer Seiko are just as creative as their Rolex counterparts. Names like Monster, Samurai, Sumo, and Turtle are familiar to most watch fans and immediately bring clear images of the individual models to the minds of Seiko enthusiasts. The Seiko Turtle has an oval case that resembles a turtle's shell, hence the nickname.

Seiko Turtle models are made of stainless steel and are comparatively large with a diameter of 44.3 mm. There are also a number of 45-mm variants, which have been christened "King Turtle" by Seiko fans. Despite the substantial measurements, they don't feel oversized on the wrist thanks to the relatively short lugs. There are multiple bezel options available, including black, dark blue, blue/orange, blue/red, black/red, and black/blue. The latter is known as the Turtle Batman.

Special editions like 2017's Blue Lagoon, the Orange Turtle Diver Nemo from 2018, and the Save the Ocean model released in 2020 were limited to production runs of only 6,000 pieces and are therefore particularly sought-after on the secondary market. However, the spotlight is generally focused on the 1970 Diver’s Re-Creation Limited Edition ref. SLA033. Seiko produced only 2,500 examples of this timepiece, and it's also the only Turtle model to be outfitted with the in-house caliber 8L35. The remaining watches in the series are powered by Seiko's automatic 4R36.

Back in 2017, Seiko released three smaller variants in the Mini-Turtle series. These stainless steel timepieces clock in at 42.3 mm and differ from their larger counterparts primarily in terms of dial design and the position of the crown at 3 o'clock.

All versions are water-resistant to 200 m (20 bar, 656 ft). Depending on the reference, they either come on a stainless steel bracelet with Seiko's Diver Extender function or on a rubber strap.

Reasons to Buy a Seiko Turtle

How much does a Seiko Turtle cost?

Prices for Seiko Turtle models start at around 330 USD. The Mini-Turtle ref. SRPC41K1, which Seiko developed in collaboration with the Professional Association of Diving Instructors (PADI), sells for this amount. The second most affordable is the ref. SRP779K1 with a blue dial, blue bezel, and black rubber strap for around 380 USD. The popular black and blue ref. SRPC25K1 "Batman" is paired with a stainless steel bracelet and changes hands for roughly 400 USD. If you prefer black cases, check out the ref. SRPC49K1 for just north of 900 USD. The limited-edition Turtle under the reference number SRPC95K1 is a great choice for those looking for something more colorful. This watch features an orange dial surrounded by a blue and orange bezel, which Seiko pairs with a stainless steel bracelet for around 800 USD. You will find the Seiko ref. SLA033 in the upper end of the price range. This variant is limited to 2,500 pieces and uses the higher quality caliber 8L35. The exclusivity is reflected in the price, so you'll need to set aside around 4,200 USD for this timepiece.

Seiko fans, also known as Seikoholics, can recognize a Turtle instantly. This is due to the cushion-shaped, oval case and the crown located at 4 o'clock – a historic trait of this watch. Luminous indices characterize the dial design. The large, sword-shaped marker at the 12 o'clock position is yet another identifier of this model. There are thinner indices at 6 and 9 o'clock, and the other positions are marked with dots. The luminous material is only missing at 3 o'clock, making room instead for the day and date display.

Seiko uses its own luminous material, LumiBrite, which is especially bright and long-lasting. As is typical of diving watches, the hour, minute, and second hands are also coated in LumiBrite.

Depending on the model, you can choose between stainless steel link bracelets or rubber straps. The limited-edition Turtle Blue Lagoon comes with both band variants. The stainless steel bracelet has a convenient extension feature, so you can adjust the length of the strap to fit over your diving suit. A folding clasp with a safety mechanism holds the timepiece securely on the wrist.

Every version features Seiko's Hardlex crystal, which is somewhere between conventional mineral glass and sapphire glass in terms of durability and scratch resistance.

The first limited-edition Seiko Turtle was the Blue Lagoon ref. SRPB11K released in 2017. This version stands out on account of its dark blue sunburst dial and blue bezel, which is turquoise between the zero position and the 20-minute mark. The Blue Lagoon is fitted on a stainless steel bracelet, and each new model also comes with a black rubber strap. Seiko only produced 6,000 copies of this timepiece. Prices on Chrono24 come in at around 540 USD.

The ref. SRPC95K1, the Orange Turtle Diver Nemo, was unveiled in 2018. While this model has the same inner workings we're used to seeing in the Seiko Turtle, its colorful looks put it in a class of its own. The sunburst dial is a vibrant orange, and the bezel is blue with a block of orange between the 0 position and 15 minutes. This watch comes on a stainless steel bracelet and is limited to a production run of 6,000 pieces. Expect to see prices around 900 USD.

In 2019, Seiko added the 1970 Diver’s Re-Creation Limited Edition ref. SLA033 to their lineup. This 45-mm version is also known as the King Turtle due to its slightly larger dimensions. The stainless steel case of this watch features Seiko's proprietary super-hard coating, which increases the material's resistance to shocks and scratches. Unlike the other Turtles, this watch is equipped with the in-house caliber 8L35, which also powers the Marinemaster SBDX001. The Seiko Turtle SLA033 is limited to 2,500 pieces and comes on a rubber strap. Mint-condition copies demand around 4,200 USD.

The Save the Ocean Automatic Diver's SRPE39K1 followed in 2020. This watch, nicknamed the King Turtle Manta Ray, honors the highly endangered sea creatures. If you look closely at the dark blue dial, you'll see subtle motifs of the manta ray, a key detail of this reference. Inside the case, you'll find the reliable caliber 4R36. The ref. SRPE39K1 measures 45 mm across and is water-resistant to 200 m (20 bar, 656 ft). Listings for this reference in mint condition on Chrono24 demand around 520 USD.

2017 saw the introduction of three smaller Turtle variants, which were quickly given the nickname "Mini-Turtle." These 42.3-mm models were originally only intended for the Japanese market, but due to the great interest in Europe, the manufacturer decided to bring the trio to this market as well.

All three versions have a stainless steel case with a crown at 3 o'clock and the automatic in-house caliber 4R35, which, unlike the 4R36, does not display the day of the week. Instead, the watches have a date complication at 3 o'clock with a magnifying glass on the Hardlex crystal.

The ref. SRPC39K1 has a blue dial and bezel. The watch is paired with a stainless steel bracelet and costs about 520 USD new. The ref. SRPC35K1 is the same in terms of technology, but its dial and bezel are black. Prices hover at around the 480 USD mark. If you're a fan of watches with a sporty flair, you should take a look at the Mini-Turtle ref. SRPC41K1 PADI. This variant was developed especially for divers and boasts a black dial, a blue and red bezel, and a blue rubber strap. Plan to spend around 350 USD on this Seiko watch.

The Beginnings of the Seiko Turtle

The roots of the current Seiko Turtle stretch back to the end of the 1960s with the debut of the ref. 6105. This watch was one of the first Japanese diving watches and was worn by countless American soldiers in Vietnam. The 6105 even made it to the big screen: In the anti-war movie "Apocalypse Now," Captain Willard – played by Martin Sheen – wears an example of this reliable automatic watch. In the mid-1970s, Seiko unveiled the follow-up model with the reference number 6309. With a diameter of 45 mm, it seemed enormous at the time. This Turtle was produced until the end of the 1980s. Both vintage watches are extremely hard to come by today, but with any luck, you will be able to buy a 6105 for around 1,900 USD.