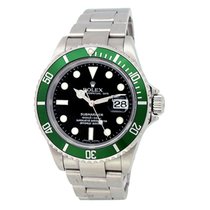 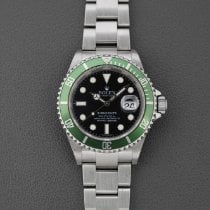 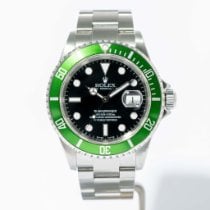 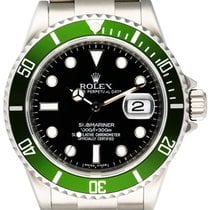 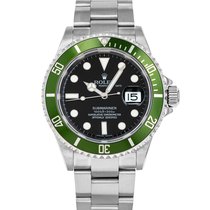 The Rolex Submariner Kermit is instantly recognizable by its black maxi dial and green bezel. Early editions like the "Flat 4" are highly sought after by collectors, and have even recorded an increase in value of up to 40% in recent years.

In 2003, Rolex celebrated the Submariner's 50th anniversary by releasing a special edition of the famous diving watch: the Submariner Date ref. 16610LV. This model has two defining features, the most obvious being the green aluminum bezel inlay. Rolex also outfitted this timepiece with a black "maxi dial", which is characterized by larger indices. The eye-catching green was the source of inspiration for this watch's nickname: Kermit.

From a technical standpoint, the Kermit, which was discontinued in 2010, is identical to the standard Submariner Date ref. 16610. Ten years later in 2020, the Geneva-based manufacturer once again launched a Sub Date with a green bezel and black dial. However, the bezel of this new model, the ref. 126610LV, is made of green ceramic. Rolex fans cleverly refer to it as "Cermit." You will also hear it referred to as "Starbucks."

Both variants are in high demand, and prices have only moved in one direction as a result: up. Depending on the exact model, prices climbed between 20% and 40% from 2020 to 2022. This trend is showing no signs of slowing down, and many investors are turning to the Submariner Kermit as a result.

Reasons to Buy a Submariner Kermit

How much does a Submariner Kermit cost?

The most affordable Submariner Date with a green bezel and black dial is the current ref. 126610LV. While Rolex lists this model for 10,600 USD, you won't have an easy time trying to buy this Kermit from an authorized dealer due to the high demand and global delivery situation. If you want to bypass the endless wait lists, you should take a look on the secondary market, but expect to pay a significant premium. In June 2022, for example, listings for this model on Chrono24 were around 23,000 USD. Two years earlier, however, prices for the ref. 126610LV were around the 19,000 USD mark.

A first-generation Kermit will set you back around 25,000 USD. These are mostly watches from the later production phase. The "Flat 4" models from the early production phase are much rarer, and slightly more expensive at 26,000 USD. Both models have performed very well financially in the last few years. The "Flat 4" edition appreciated by 40% between June 2020 and June 2022, while the "normal" Kermit increased in value by 35% in the same period.

Rolex produced the Submariner Date ref. 16610LV Kermit from 2003 to 2010. This timepiece has the same stainless steel case as the standard version of the ref. 16610, which you can recognize by its narrow lugs and relatively small crown guard. These models are also powered by the same caliber, namely the 3135. This movement features a blue anti-magnetic Parachrom hairspring, offers a power reserve of 48 hours, and, in true Rolex fashion, is chronometer-certified.

The Kermit ref. 16610LV is the first Submariner to have a maxi dial. As opposed to the dials that had been customary up to that point, the applied indices are significantly larger, which makes them easier to read.

The real showstopper, however, is the bezel with the green aluminum inlay. Rolex produced nine different versions of this bezel during the seven years that the "Kermit" was in production. However, you need a sharp eye to tell the difference between them. For example, the shade varies between a light olive green – also called "Bertolli" after the Italian olive oil brand – to the much darker "Racing Green." Other differences can be seen in the thickness of the minute markers, as well as the shape of the numerals. The most popular model is the "Flat 4." If you take a closer look at the 4 in the number 40 on a Flat 4 bezel, you'll see that it's flat at the top. Rolex only used this font for earlier Kermit editions, which is why this watch is quite a rare find.

About the New Editions With Ceramic Bezels

Rolex released a new Kermit variant in 2020. Like previous models, the ref. 126610LV is made of stainless steel and features a maxi dial. However, this watch is 41 mm in diameter and its bezel inlay is crafted from Rolex's high-tech ceramic, Cerachrom.

Changes also took place inside the case itself, with the state-of-the-art caliber 3235 now powering the latest Kermit edition. This movement features Rolex's proprietary Parachrom hairspring and Chronergy escapement. This escapement is made of a nickel-phosphorous alloy that is less sensitive to magnetic fields and is especially efficient. Thanks to the new escapement and an enlarged barrel, the caliber has a power reserve of 70 hours.

The ref. 126610LV has three nicknames: Kermit 2.0, Cermit, and Starbucks. It will be interesting to see which one goes the distance.