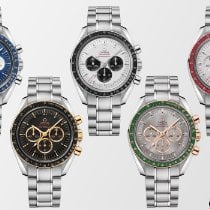 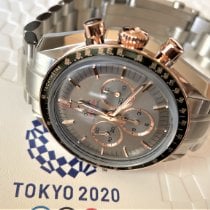 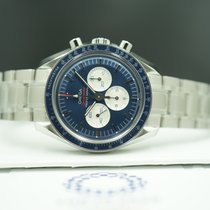 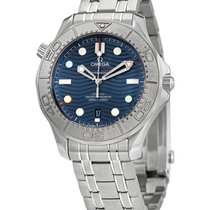 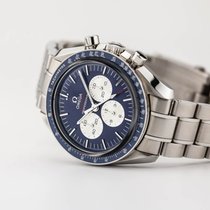 Omega has been the official timekeeper of the Olympic Games since 1932. The manufacturer has released numerous limited-edition timepieces in honor of this international event. Top models boast ceramic dials and Master Chronometer calibers.

Beyond a few exceptions, Omega has been the official timekeeper of the Olympic Games since the 1932 Summer Games in Los Angeles. The tradition continues to this day, with Omega resuming their role at the delayed Tokyo 2021 games and the 2022 Winter Olympics in Beijing. What began with 30 mechanical stopwatches in 1932 had expanded to 450 metric tons of equipment for 480 expert timekeepers by 2016.

Omega regularly introduces new special editions for each iteration of the Games. Collectors and fans are especially fond of these timepieces. The Swiss manufacturer bases most of these watches on one of their sportier models such as the Aqua Terra, Speedmaster, Seamaster, or Seamaster Planet Ocean. Select versions even come with Master Chronometer certification and can resist magnetic fields up to 15,000 gauss.

How much does an Omega Olympic Games cost?

Over the decades, Omega has produced a comprehensive variety of watches in honor of the Olympic Games, covering a wide price range. For example, you can purchase a well-maintained Seamaster "Albertville Barcelona 1992" with a quartz caliber for as little as 1,800 USD on Chrono24. On the other end of the spectrum, you'll find rare collector's items like the Olympic pocket watch from 1932, which demands about 66,000 USD. Numerous interesting models fall between those two extremes. Options include the Seamaster Diver 300M Rio 2016 for around 3,600 USD, the Aqua Terra Pyeongchang 2018 for roughly 4,800 USD, and the Planet Ocean Toyko 2020 for about 7,300 USD.

The Omega Seamaster 1948 Co-Axial "London 2012" pays tribute to the last two times the Olympics were held in London: 1948 and 2012. This stainless steel watch measures 39 mm in diameter and features a silver dial with a small seconds at 6 o'clock. Unlike the standard-edition Seamaster 1948, this model has a tempered blue small seconds hand. Scratch-resistant sapphire crystal protects the display, and the 18-karat yellow gold case back features the official logo of the London 2012 games.

Omega limited this timepiece to a run of 1,948 pieces. Inside the case, you'll find the chronometer-certified Co-Axial caliber 2202 based on the ETA 2895-2. The watch is water-resistant to 120 m (12 bar, 394 ft) and, thus, can join you for a dip in the pool. A black leather strap with a stainless steel clasp completes the look. Prices for this model sit around 6,400 USD.

Omega introduced two stylish versions of the Seamaster Planet Ocean for the 2014 Olympic Games in Sochi, Russia. The manufacturer created one model for men and another for women. Both had limited runs of 2,014 pieces.

The ref. 522.30.46.21.01.001 is a men's watch with a black dial. Its power comes from the automatic Omega Co-Axial caliber 8500 with a silicon balance spring and 60-hour power reserve. The 45.5-mm stainless steel case features a unidirectional diving bezel in black ceramic. The bezel's diving scale catches the eye with its red and blue accents – a nod to the Russian flag. This timepiece is water-resistant to 600 m (60 bar, 1,969 ft) and boasts a helium escape valve. You can purchase a never-worn model on a stainless steel bracelet for approximately 5,000 USD.

The ref. 522.33.38.20.04.001 is a stylish women's watch that also celebrates the 2014 Winter Games in Sochi. This edition has scratch-resistant sapphire crystal, a white dial, and a white ceramic diving bezel. Red and blue accents adorn both the dial and bezel. The case measures 37.5 mm in diameter and, like the men's model, is water-resistant to 600 m (60 bar, 1,969 ft). The automatic Omega Co-Axial caliber ticks away inside the case. This movement comes with a 50-hour power reserve and a silicon balance spring. Expect to spend around 4,700 USD for one of these limited-edition timepieces.

Features of the Planet Ocean "Sochi 2014"

Omega marked the 2016 Summer Olympics in Rio de Janeiro, Brazil with a special-edition Speedmaster Mark II. This timepiece pays homage to a timepiece from 1969 and had a limited run of 2,016 pieces. It bears the reference number 522.10.43.50.01.001. The chronograph features a matte black dial with a 30-minute counter at 3, a 12-hour counter at 6, and a small seconds at 9 o'clock. The subdials sit within rings of bronze, silver, and 18-karat gold, respectively. The tachymeter scale on the sapphire crystal sits directly atop a ring of SuperLuminova, enabling it to glow in the dark. Omega mounts this 42.4-mm stainless steel watch on a stainless steel bracelet with polished middle links.

The Olympic rings, a "Rio 2016" inscription, and the official logo of the Rio games adorn the case back. Beneath the case back, the automatic Omega chronograph caliber 3330 is hard at work. This movement boasts a co-axial escapement, silicon balance spring, and a 52-hour power reserve. The watch has a depth rating of 100 m (10 bar, 328 ft) and changes hands for roughly 5,200 USD on Chrono24.

Omega launched the Seamaster Bullhead Rio 2016 alongside the Speedmaster mentioned above. This watch's most notable feature is its trapezoidal case with two chronograph pushers at 11 and 1 o'clock. From a distance, the design resembles a bull's head – hence the model's name. Omega only produced 316 copies of this timepiece.

Due to its limited production run, the ref. 522.12.43.50.04.001 is rather difficult to find for sale. This 43-mm chronograph features accents in the five Olympic colors: red, yellow, blue, green, and black. An internal blue bezel with a 60-minute scale surrounds the central white dial, and the 30-minute counter at 12 o'clock sits directly opposite the small seconds at 6. A date window at 3 o'clock completes the dial. The Olympic rings, the "Rio 2016" inscription, and the Game's logo all appear on the screw-down case back.

Omega pairs the watch with a blue leather strap with black, yellow, green, and red stitching. Inside the case, you'll find the automatic Omega Co-Axial caliber 3113 with a column wheel and 52-hour power reserve. The watch is water-resistant to 150 m (15 bar, 492 ft) and demands around 8,300 USD on Chrono24.

A Seamaster Diver 300M completes the Rio 2016 trilogy. Omega limited this timepiece to a run of 3,016 pieces. You can find this diving watch under the reference number 522.30.41.20.01.001. It features a black dial with a version of the Diver 300M's characteristic wave pattern. For this particular model, the pattern is based on the promenade along Rio's famous Copacabana. The black bezel has a diving scale with numerals in the other Olympic colors: green, red, yellow, and blue. Skeletonized hour and minute hands guarantee an unobstructed view of the date display. Like other Seamaster Diver 300M models, a helium escape valve sits on the case at 10 o'clock.

The stainless steel case back bears the logo of the Rio 2016 Summer Games, as well as the watch's unique serial number. The watch gets its power from the chronometer-certified Omega caliber 2500 with a co-axial escapement and 48-hour power reserve. You can call this model on a stainless steel bracelet your own for about 5,200 USD.

In 2018, the Winter Olympics took place in Pyeongchang, South Korea. Omega marked the occasion with two special editions: a Seamaster Aqua Terra and a Seamaster Planet Ocean 600M. Both were limited to runs of 2,018 pieces and feature red and blue accents in honor of the host country's flag.

The Planet Ocean ref. 522.32.44.21.03.001 is 43.5 mm in diameter and comes with a blue ceramic dial. The bezel insert is made of the same material, though Omega uses red rubber to mark the first 15 minutes on the diving scale. This color scheme continues on the rubber strap. The watch is also available on a stainless steel bracelet. The inscription "Pyeongchang 2018," the Olympic rings, and the Game's official logo decorate the sapphire crystal case back.

The Aqua Terra "Pyeongchang 2018" is a 41.5-mm stainless steel watch. The dial's edge features the inscription "Pyeongchang 2018" in the Olympic colors, and the blue dial boasts a beautiful teak pattern. The case is water-resistant to 150 m (15 bar, 492 ft) and has a sapphire crystal back engraved with "Pyeongchang 2018." Through the case back, you can watch the automatic Omega caliber 8500 at work. Prices for a mint-condition model sit around 5,500 USD on Chrono24.

Features of the Planet Ocean "Pyeongchang 2018"

Features of the Aqua Terra "Pyeongchang 2018"

While the 2020 Summer Olympics in Tokyo, Japan were delayed due to the coronavirus pandemic, Omega still released limited editions in the Games' honor. Only 2,020 copies exist of each timepiece, and with the postponement of the Games until 2021, these watches suddenly became rare "misprints" that mark an event that never took place. Therefore, these models have the potential to become coveted collector's items.

White SuperLuminova fills the hands and indices, and a blue Tokyo 2020 logo adorns the sapphire display case back. A textured blue rubber strap with polished stainless steel lugs holds the timepiece securely on the wrist. Never-worn models change hands for about 6,400 USD on Chrono24.

A Planet Ocean for Tokyo

The Planet Ocean ref. 522.33.40.20.04.001 is a 39.5-mm stainless steel watch with 600 m (60 bar, 1,969 ft) of water resistance. One of its most interesting details is its polished white dial with white applied indices. The central second hand's red "lollipop" tip is a reference to Japan's flag. The bezel also comes in white ceramic and features a striking Liquidmetal diving scale with a red "20."

This watch gets its power from the Master Chronometer caliber 8800 with a 55-hour power reserve. You can view the movement through the sapphire crystal case back with a "Tokyo 2020" engraving. Omega pairs this model with a white leather strap, though they also ship it with a stainless steel bracelet and gray NATO strap. Prices for the Planet Ocean Tokyo 2020 come it at around 7,300 USD.

Features of the Planet Ocean "Tokyo 2020"

A Speedmaster Exclusive to Japan

In addition to the two watches mentioned above, Omega produced five new Speedmasters in honor of the Olympic Games. You could only purchase these watches on-location at Omega boutiques in Japan. Each represents one of the Olympic rings and had a limited run of 2,020 pieces. Two of the five models boast a two-tone design. Omega also offered 55 complete sets of all five timepieces, much to the delight of collectors. One example, the ref. 522.30.42.30.06.001 pairs a white dial with a red tachymeter bezel and sells for roughly 7,300 USD new.

The ref. 522.30.42.30.03.001 is slightly more affordable. This Olympic edition is identical to the red and white model except for its color scheme. It features a blue dial and aluminum bezel, while the subdials, hands, and indices are white. The "Speedmaster" inscription and tip of the second hand add a few splashes of red. Be sure to set aside about 6,700 USD for one of these timepieces.

In early 2021, Omega announced the first special edition for the 2022 Winter Olympics in Beijing, China. This time, the Swiss manufacturer went with the Seamaster Diver 300M. This timepiece boasts a 42-mm stainless steel case with 300 m (30 bar, 984 ft) of water resistance. Like the standard-edition Diver 300M, the Beijing version has a helium escape valve at 10 o'clock. Its blue ceramic dial also features the series' characteristic wave pattern. The numerals 2, 4, 8, 10, and 12 pay tribute to the Olympic rings and come in red, green, blue, yellow, and black, respectively.

The bezel insert also sets this watch apart from the rest of the Diver 300M collection. It is titanium and comes with raised numerals. The stainless steel case back features an engraving of the 2020 Beijing Olympic logo. Omega completes this model with a five-piece link stainless steel bracelet.