The beautiful thing about watches is their ability to survive generations. They tell us stories about achievements, family, and individuals that are often just as significant as the technical expertise it took to make them. In the vast landscape of watches, some go on to be recognized as icons of the industry. This series will take a closer look at the most prominent among them. In this article, we will be focusing on a watch that comes with one of the greatest stories: the Omega Speedmaster.

The Omega Speedmaster might just be the most famous watch ever made thanks to its role in of one of the most important moments in history. On July 20, 1969, Neil Armstrong and Buzz Aldrin became the first humans to set foot on the Moon. However, the Speedmaster’s story started well before the Moon landing. In this article, we’re going to give you a short overview of the Speedmaster’s history and discuss why it’s such an iconic and widely loved watch. Over the last 60 years, Omega has released such an incredible number of Omega Speedmasters that it’d be impossible to describe them all in just one article. Consider this a basic introduction to the Omega Speedmaster with a focus on the Omega Speedmaster Professional (Moonwatch). This watch will forever be known as the first watch worn on the Moon. However, before we get ahead of ourselves, let’s go back to the beginning, over a decade before man ever reached the Moon. 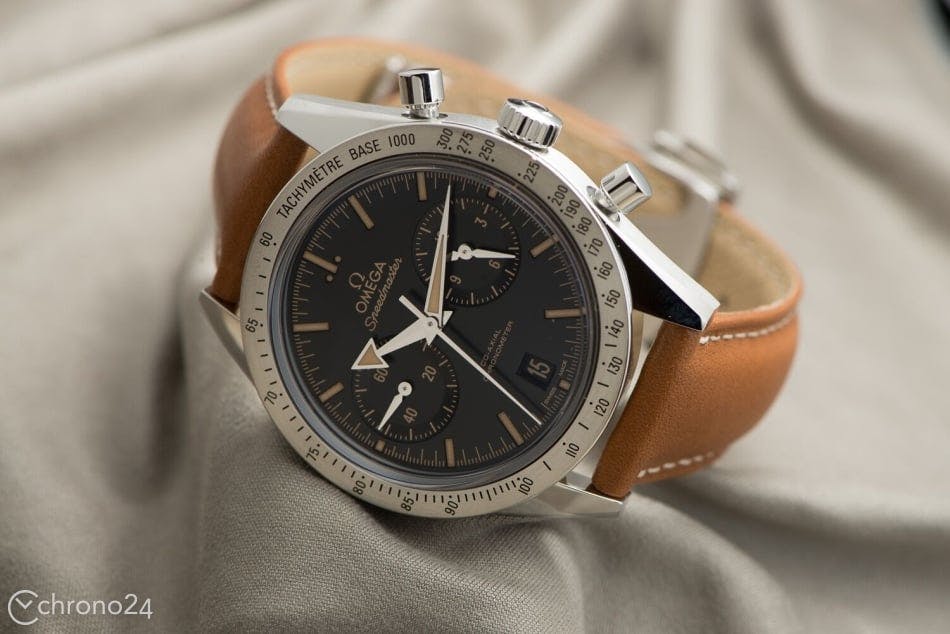 The Beginnings of the Omega Speedmaster

In 1957, Omega released a trio of watches that have since become icons for the brand and of the world of watches as we know it today. The trio consisted of the Omega Seamaster 300 (CK2913), the Omega Railmaster (CK2914), and the Omega Speedmaster (CK2915). The Speedmaster was initially intended as a sports chronograph, taking its inspiration from the dashboard clocks of Italian sports cars from the late 1950s. This watch is characterized by its sporty looks, including curved lugs, a black dial, and broad arrow hands.

At its introduction, the Speedmaster was the world’s first chronograph wristwatch with a tachymeter scale on the bezel instead of the dial – a feature designed for the benefit of race car drivers. The legendary Omega caliber 321 with a column wheel chronograph powers this timepiece. Omega used this Lemania caliber-2310-based movement until 1968. However, many people consider the original Speedmaster the ‘Holy Grail’ of watches. It was only in production for two years, and that was 60 years ago, so there aren’t many left today. If you’d like to buy this timepiece and are lucky enough to find one, expect to pay anywhere from the tens of thousands of dollars to a couple hundred thousand dollars for a watch in good condition. 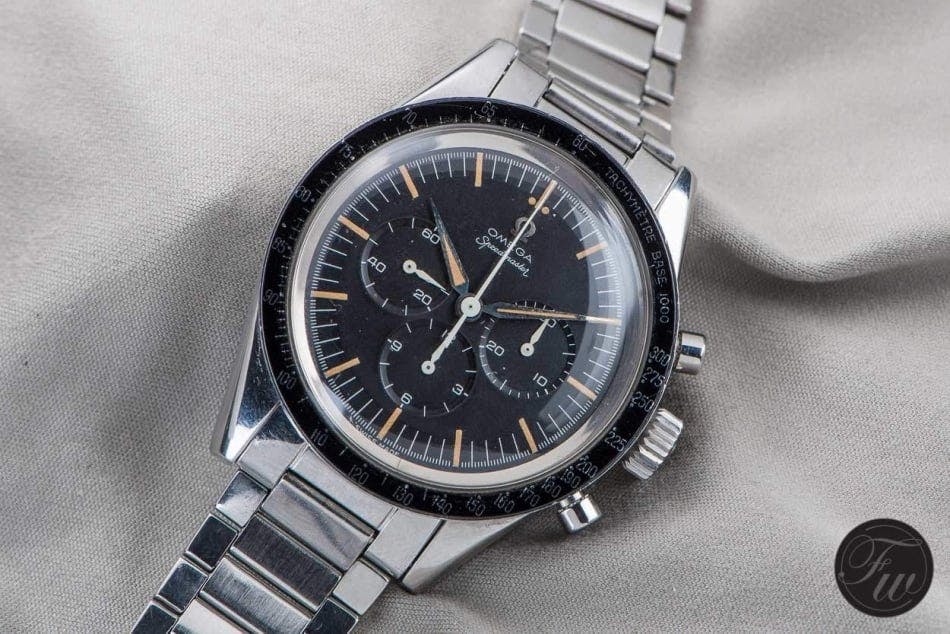 The Early Days of Space Exploration

Omega never planned for the first Speedmaster to be the first watch on the Moon. That being said, the connection to NASA began with the second edition of the Speedmaster: the ref. CK2998. This timepiece replaced the original ref. CK2915 two years after its debut. NASA astronauts Walter Schirra and Gordon Cooper each purchased a CK2998 in 1962 for use in spaceflight. In fact, Schirra was wearing his Speedmaster on board the Sigma 7 during the Mercury-Atlas 8 mission in October 1962. This marked the Speedmaster’s first journey into space. 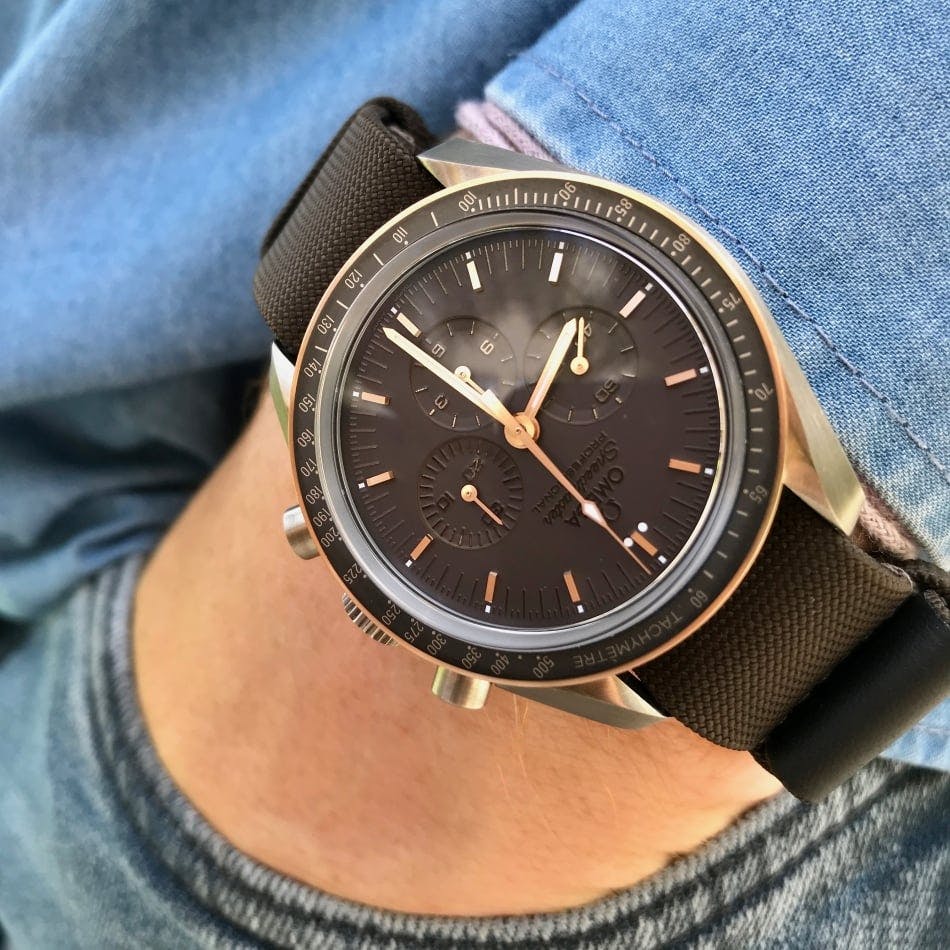 The Watch That Made History

The Speedmaster’s spacefaring journey reached its high point with the Apollo 11 mission. The Apollo 11’s crew consisted of astronauts Neil Armstrong, Buzz Aldrin, and Michael Collins. All three wore their own Omega Speedmaster Professional on their trip to the Moon. Armstrong and Aldrin, who both set foot on the Moon, each wore an Omega Speedmaster Professional ref. 105.012 throughout the mission. However, only Aldrin took his watch with him onto the lunar surface. Collins and his Speedmaster ref. 145.012 stayed behind in the Command Module. This historic moment began a legacy that lasts to this day. 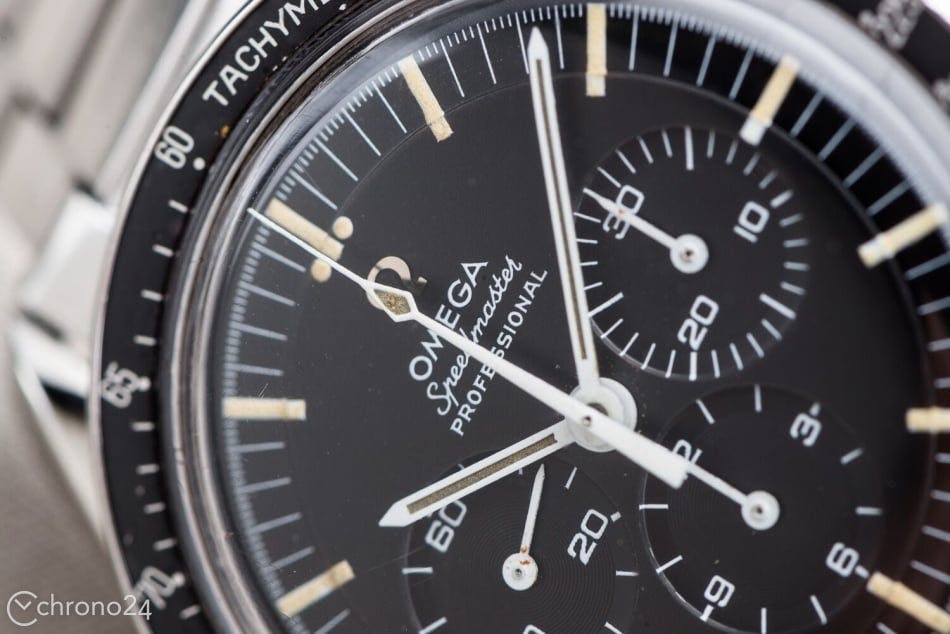 The Secret to Success

It’s important to take a step back and take a quick look at what about its design makes this version of the Omega Speedmaster Professional so incredibly successful. Why has it survived largely unchanged since 1964 and the introduction of the ref. 105.012? The secret to the Speedmaster’s design is a combination of elements that work perfectly together. First, Omega chose a black dial and white baton hands that contrast beautifully, making the time particularly easy to read. Secondly, Omega managed to create a dial with three subdials that remain unobstructed no matter where the hour and minute hands are. This is due to how slim the hands are, simple design elements, and the effective placement of those elements. The overall design is tidy, practical, and easy on the eye while maintaining the distinct character unique to the Speedmaster. Not only did this watch made history, but it has also earned a spot in the hearts of the watch community and become the most iconic chronograph design ever.

The Speedmaster Professional After the Moon Landing

The successor to the iconic Moonwatches was 1968’s Omega Speedmaster ref. 145.022 – the first Speedmaster not to feature the legendary Omega caliber 321. Instead, this newer Speedmaster Professional featured the simpler and more affordable Omega caliber 861, a cam-controlled chronograph. This change was made as a result of the Speedmaster’s success in the wake of the Moon landing and the desire to produce the Speedmaster in larger numbers to keep up with high demand. In addition, it was around this time that Swiss watch brands had to take measures to stay in business due to the rise of the quartz revolution.

Luckily for Omega, the Speedmaster ref. 145.022 would prove to be both a commercial and technological success. It was the first new model introduced to the public since the Moon landing and was used during Space Shuttle missions starting in 1978. In 1982, it was replaced by ref. 145.0022, which was produced until 1988.  That year, Omega started using their new PIC (Product Identity Code) for reference numbers. The next Speedmaster Professional bore the entirely new reference number 3590.50. Its successor, the 3570.50, was manufactured from 1996 to 2014. This model’s biggest changes came in 1997 with the introduction of the Omega caliber 1861 – a lightly modified version of the caliber 861 – and the use of Superluminova instead of tritium to coat the dial and hands. 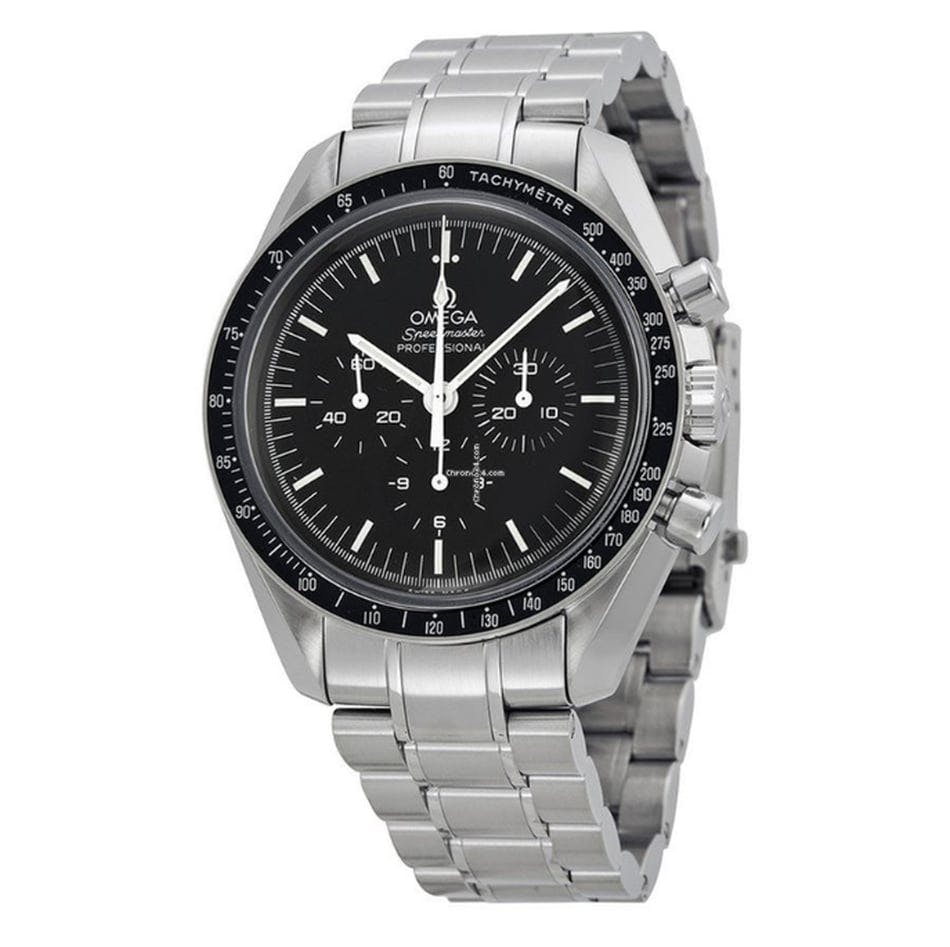 Fortunately, this never happened. In 2017, Omega celebrated 60 years of the Omega Speedmaster, Seamaster 300, and Railmaster with the introduction of special 60th Anniversary editions of each model. The Speedmaster pays homage to the original Speedmaster from 1957. You’ll have to wait until 2019 for an anniversary model of the most iconic Speedmaster. Considering 2019 will mark the 50th anniversary of the Moon landing, it’s reasonable to expect big things from Omega and their tribute to the Moonwatch. 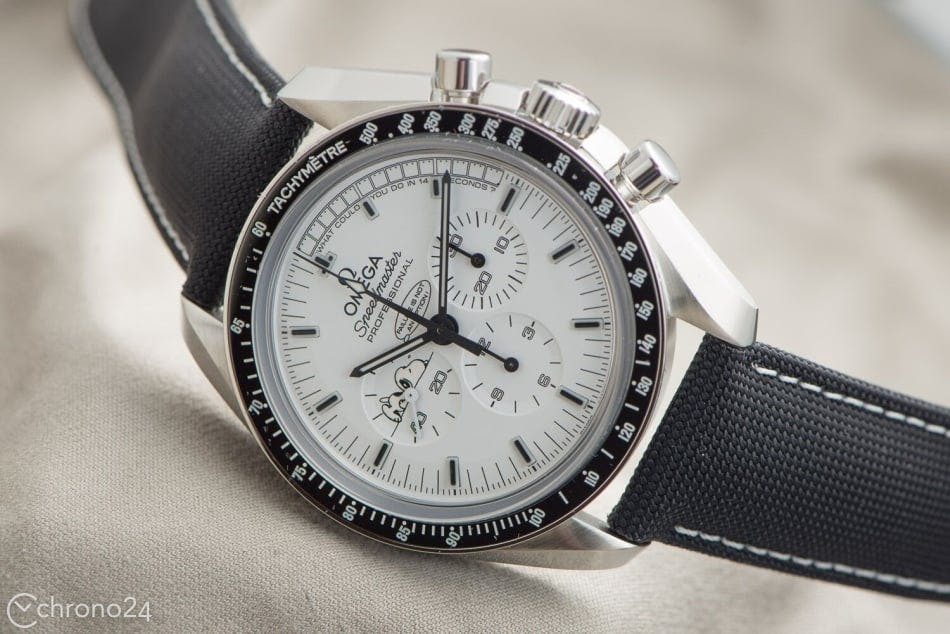