Glorious victory or heartbreaking defeat – it all hinges on a matter of seconds in the world of auto racing. It should, therefore, come as no surprise that there’s a big need for high-precision timekeepers. Naturally, industry leaders have historically turned to Switzerland. Based in La Chaux-de-Fonds, high in the Jura mountains, is a brand that is known the world over for its precise watchmaking prowess and cult chronographs: That brand is TAG Heuer. 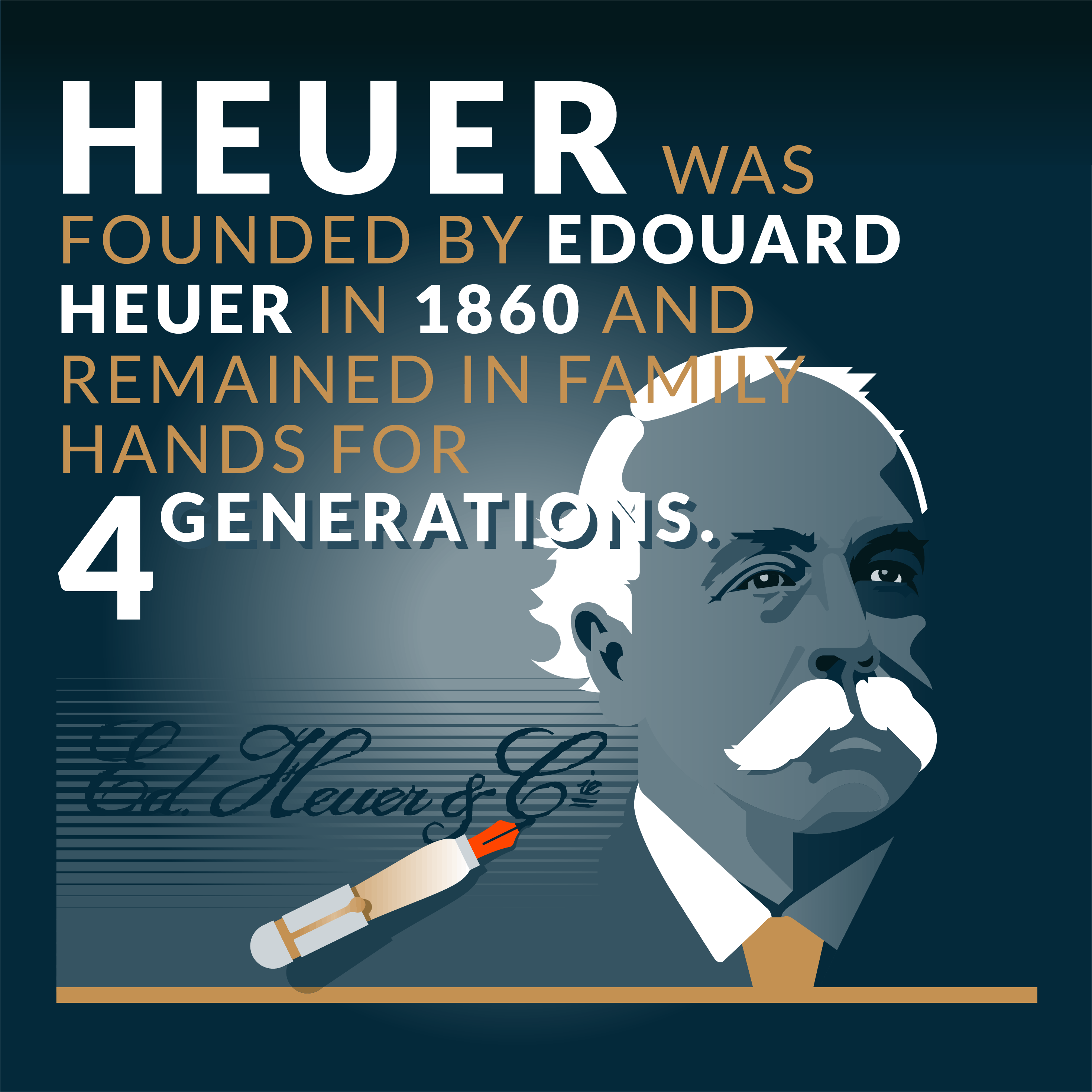 The manufacturer has roots dating back as far as 1860. At just 20 years of age, Edouard Heuer, the son of a shoemaker, founded a clock and watchmaking workshop in Saint-Imier, Switzerland. His vision was to produce chronographs in a more efficient and cost-effective way, and his solution was to simplify the coupling mechanism. Heuer developed the oscillating pinion, which he had patented in 1887. This innovation was not only the cornerstone of the first series production of chronographs but also laid the groundwork for the company’s future success. 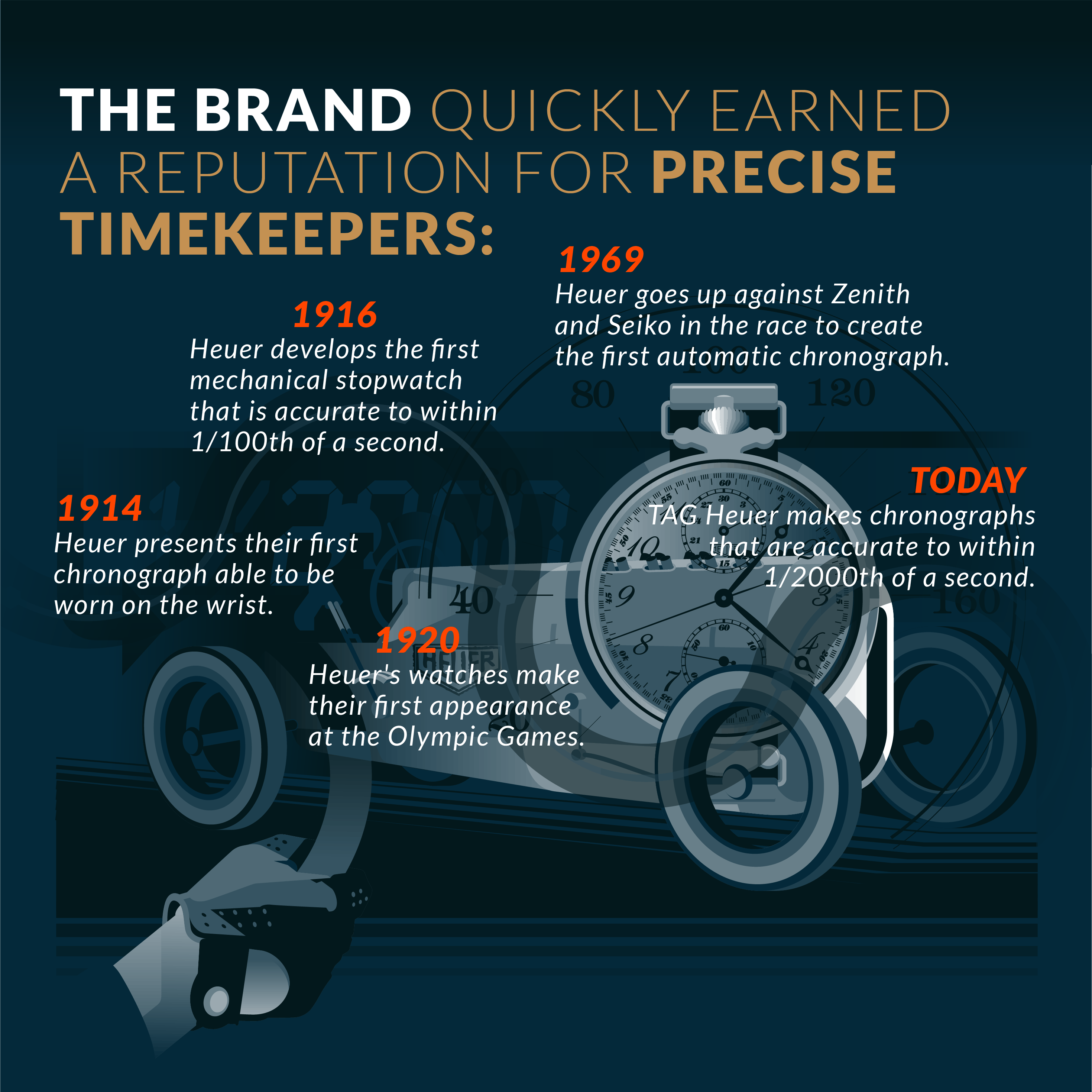 Heuer has had a number of major successes throughout its history, including the development of the first mechanical stopwatch that could time to within 1/100th of a second. It didn’t take long for the name Heuer to become synonymous with precision and reliability. This led to Heuer serving as the official timekeepers of prestigious sporting events, including the 1920, 1924, and 1928 Olympic Games. A few years later, Heuer found themselves in a different kind of race: the race to develop the first automatic chronograph. They were up against competitors Seiko and Zenith. Curious to find out who won? Head over to our article celebrating the 50th anniversary of the automatic chronograph to find out. 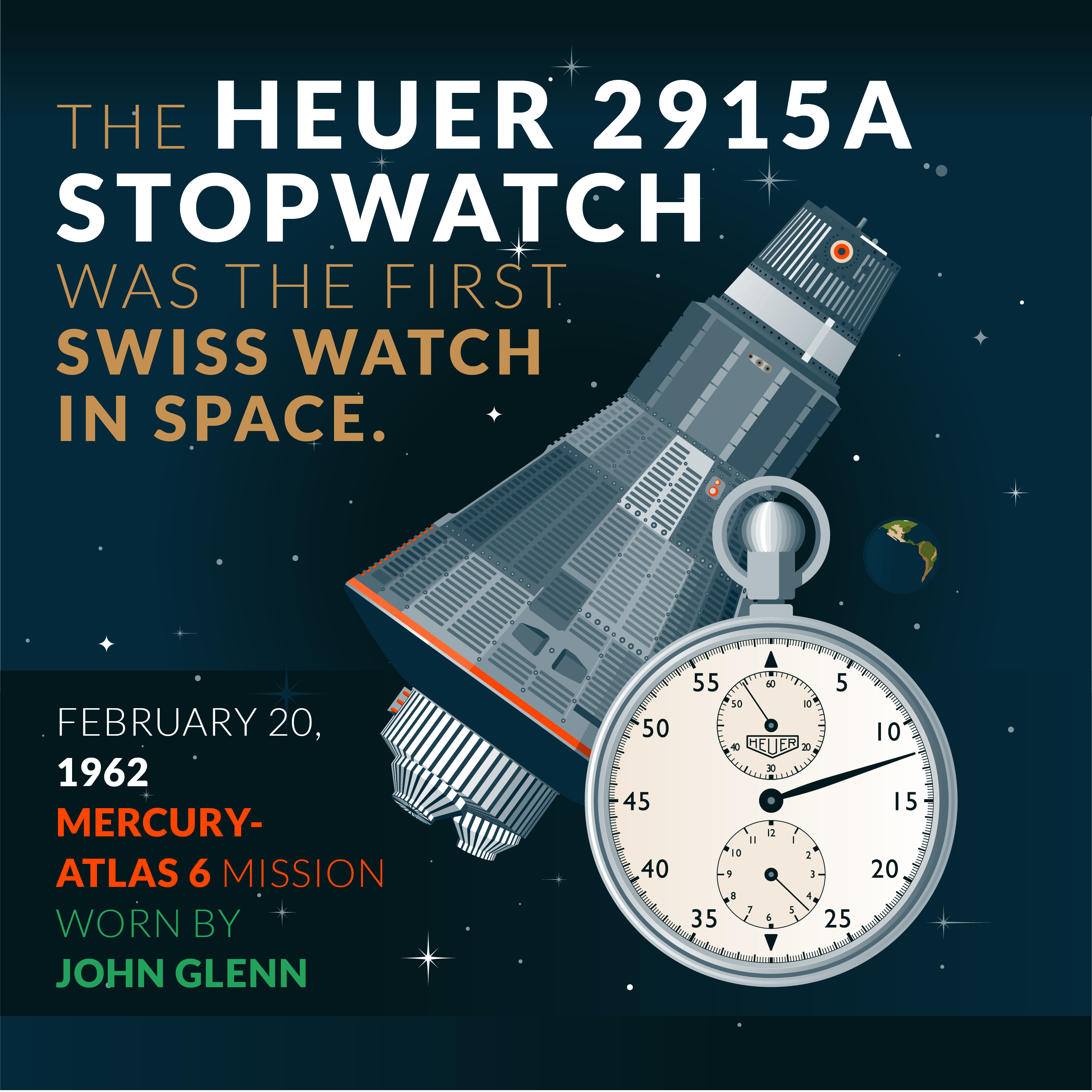 Another of the brand’s major milestones falls somewhat in the shadow of another Swiss brand. When you hear “watches in space,” you most likely think of Omega. However, the first Swiss timepiece in space was actually a Heuer 2915A stopwatch. The stopwatch was part of John Glenn’s equipment as he became the first American to fully orbit the Earth, a feat that took 4 hours and 56 minutes. 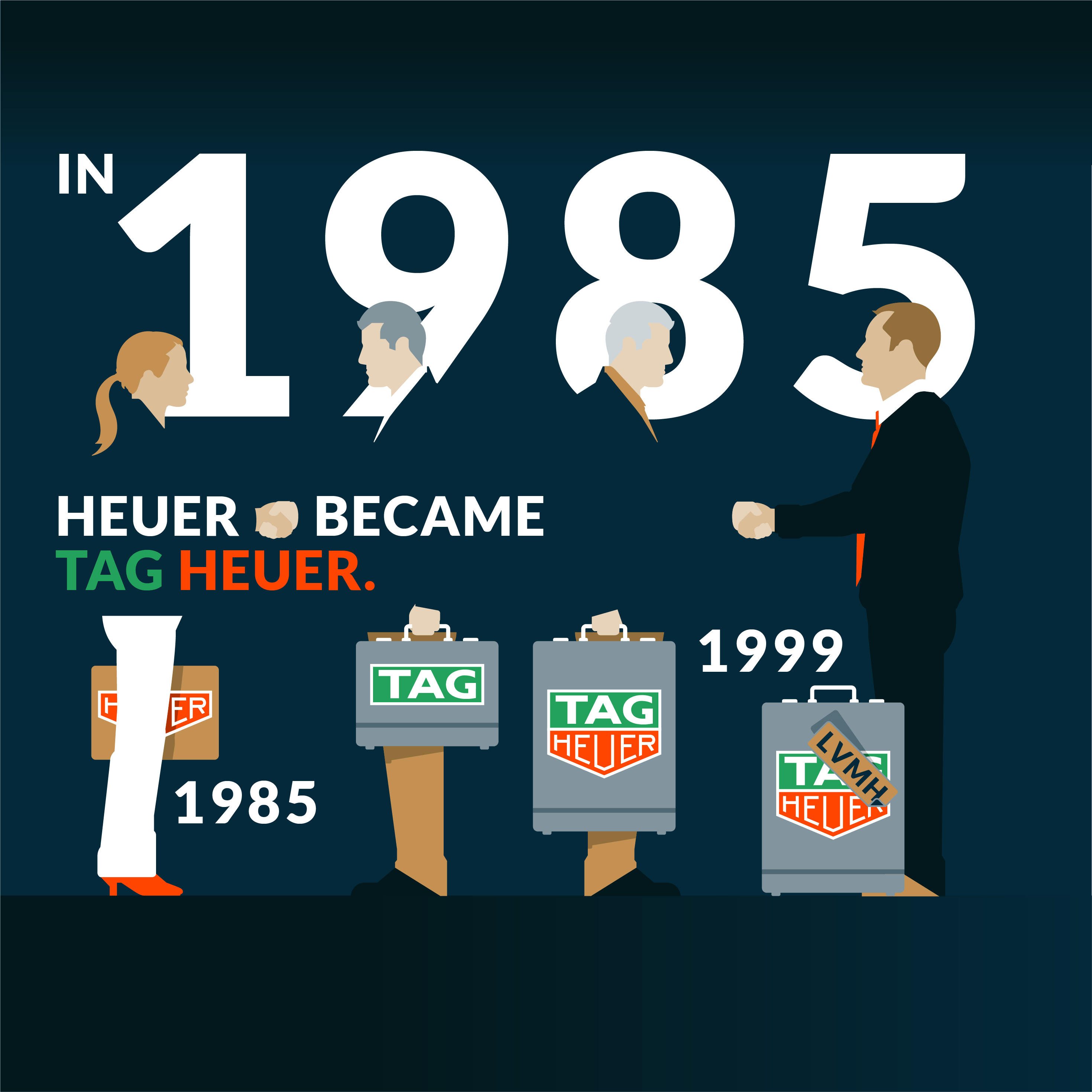 The era that followed continues to shape the Heuer catalog to this day. Models such as the Heuer Autavia, Carrera, and Monaco began finding their ways onto the wrists of famous race car drivers, athletes, and other prominent individuals. All three are considered icons of watchmaking history. That said, this Swiss powerhouse was not immune to the quartz crisis in the 1970s and 80s. The changing industry paired with other economic factors forced the Heuer family, who had run the business for four generations, to sell to the TAG Group (Techniques d’Avant Garde) in 1985. The last Heuer family member at the helm was Edouard’s great-grandson Jack Heuer. The new owners renamed the brand TAG Heuer. The firm went public in the 1990s before being taken over by the luxury goods conglomerate LVMH in 1999. Today, the brand is run by CEO Jean-Claude Biver. 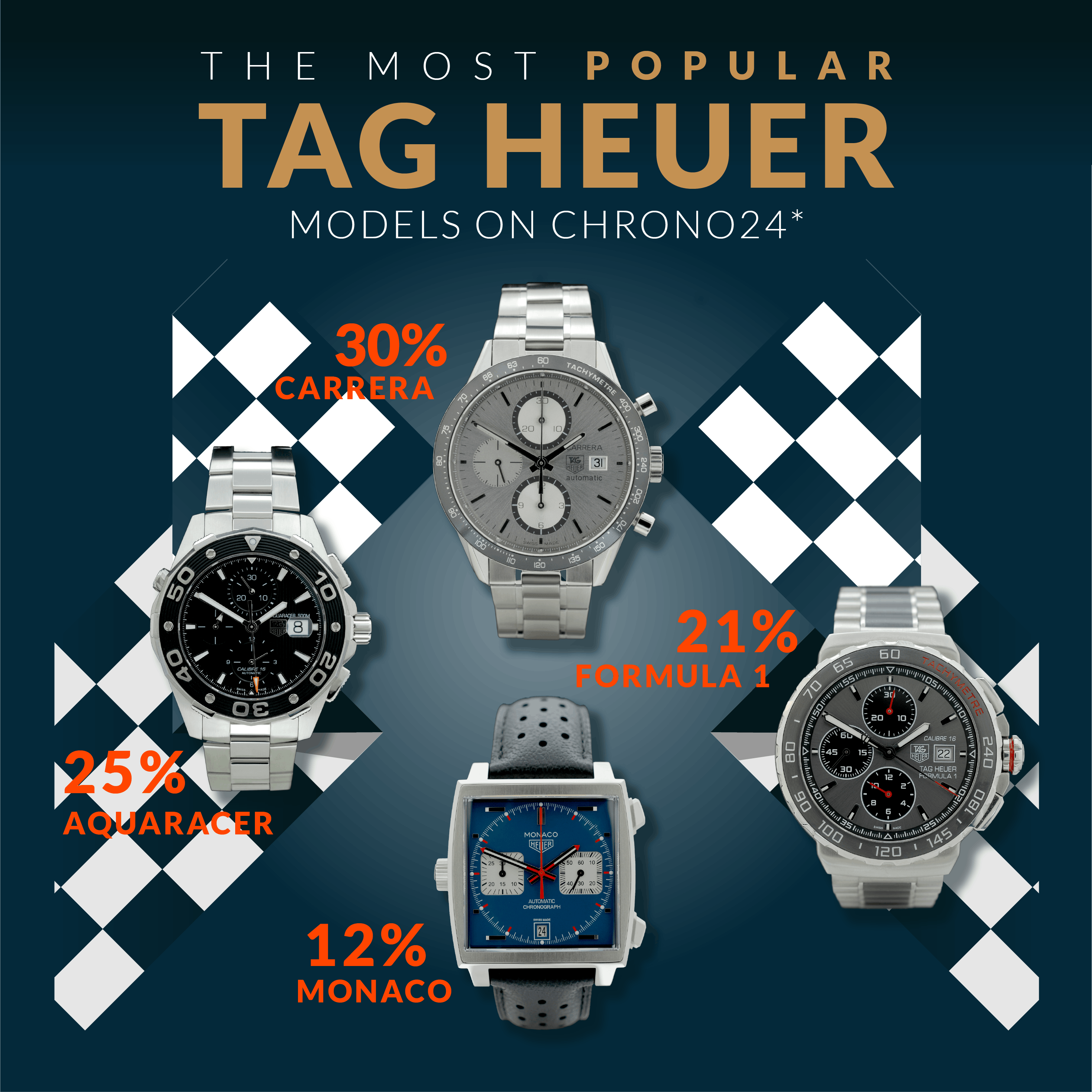 A look at our 2019 sales numbers reveals that the bestselling TAG Heuer models on Chrono24 are the iconic watches mentioned above. At 30% of TAG Heuer sales, the top spot goes to the Heuer Carrera, named for the notorious race across Mexico. Next up are the Aquaracer (25%), Formula 1 (21%), and Monaco (12%). Most TAG timepieces found a new home in Germany (20% of sales), though the brand seems to be popular in both the US (12%) and France (9%), as well. 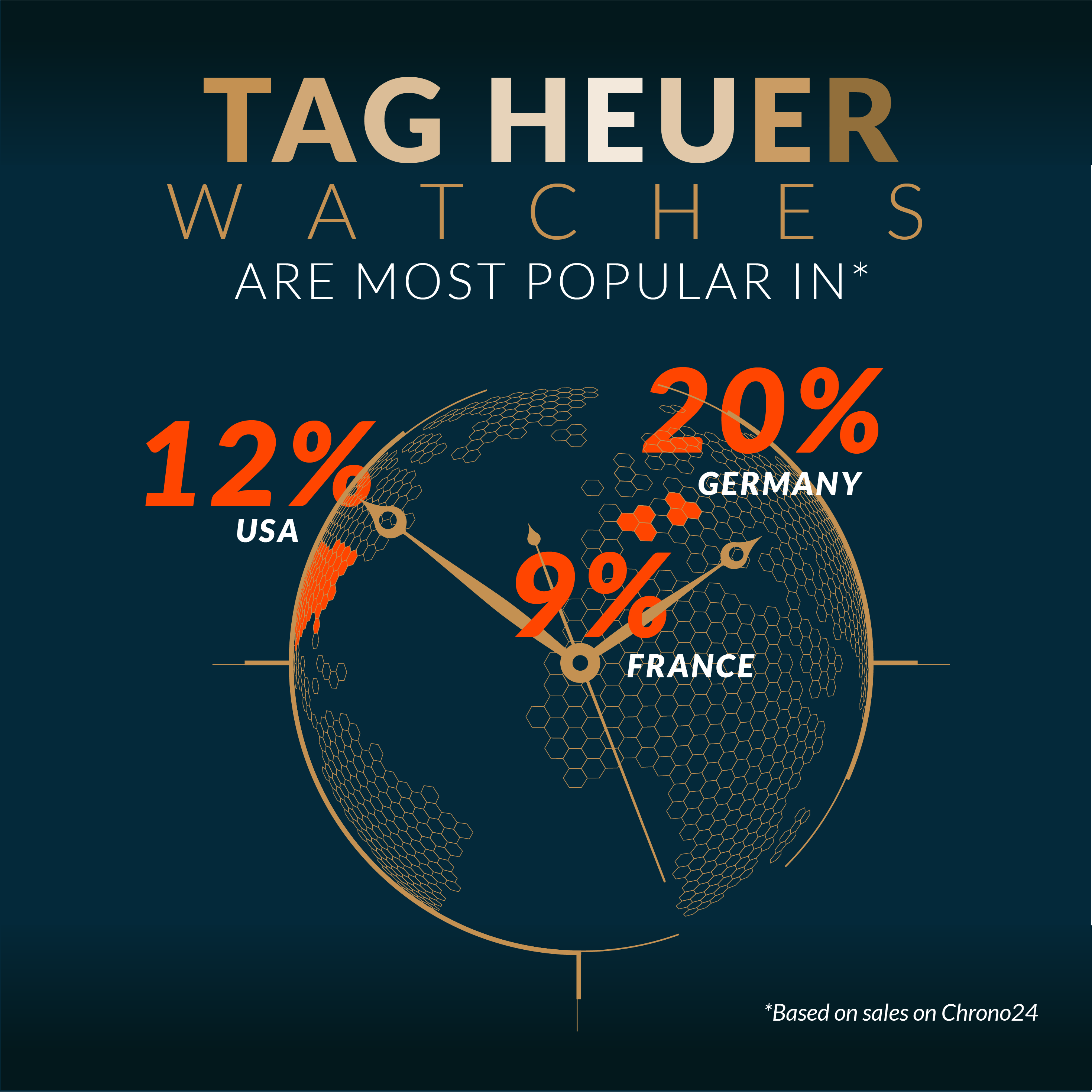 Is the new TAG Heuer Autavia still a “true” Autavia?

One Brand with many faces: TAG Heuer