It takes 29.5 days for the Moon to travel once around the Earth. One side of the Moon is in constant darkness, while the other side is either fully visible, half visible, or appears as just a sliver. If you have a moon phase display on your watch, you’ll always know where we are in the lunar cycle.

How does the Moon impact our daily lives?

Whether you’re surfing, deciding when to cut your hair, or pruning fruit trees, the lunar cycle can influence many aspects of your life. The most tangible example, of course, is the tide. High tide results from the gravitational pull of the Moon, as well as the Moon’s relative position to the Earth. Whether our hair and nails actually grow slower during the waning Moon remains to be seen, but fruit farmers and winemakers have followed lunar cycles for centuries. Supposedly, fluid flows back into the roots during the waning Moon, making it the ideal time to prune trees and vines.

The Moon also played a pivotal role in the Roman calendar, which had 12 lunar months with either 29 or 30 days. The Romans used the variable month lengths to account for the fact that it takes 29.53059 days for the Moon to orbit the Earth. Julius Caesar was the first to introduce a calendar based on the duration of Earth’s orbit around the Sun – 365 days. However, our current calendar also tracks the Moon: Did you know that Easter Sunday always follows the first full Moon after the first day of spring (March 21st)?

The Moon and Watchmaking

Seeing as the Moon, like the Sun, has long played an important role in our understanding of time, moon phase displays have appeared on timepieces – specifically grandfather clock dials – since the 16th century.

The moon phase, or moon phase display, is considered a small complication in watchmaking. Everything in watchmaking comes down to gears that must meet and turn one another at specific times. Since the lunar cycle is an uneven 29.53059 days, moon phase displays require a bit of extra finesse: You’d need 29.5 teeth on a gear to account for 29.5 days. Watchmakers solve this dilemma by putting two moons on a single disc with 59 teeth. The current moon phase is typically visible through a small aperture, displaying a crescent moon, half moon, or full moon.

Of course, the Moon takes 29.53059 days to orbit the Earth, not 29.5. This adds up to a deviation of 0.06118 days every two lunar cycles, i.e., 90 minutes and one day every three years. Certain models have a mechanism to correct this deviation, so-called “precise moon phase displays.” Depending on the sophistication of the movement, precise moon phase displays will only need correction every few hundred, thousand, or even million years.

Displaying the lunar phase on the dials of grandfather and wall clocks has been around since the 16th century. Blancpain revived the skill after the Quartz Crisis in the 1970s and launched the 6395 caliber with a moon phase display in 1983. There are now models with moon phase displays from nearly every major manufacturer, e.g., the Patek Philippe Nautilus, the Rolex Cellini, and the Panerai Luminor. Here are a few highlights: 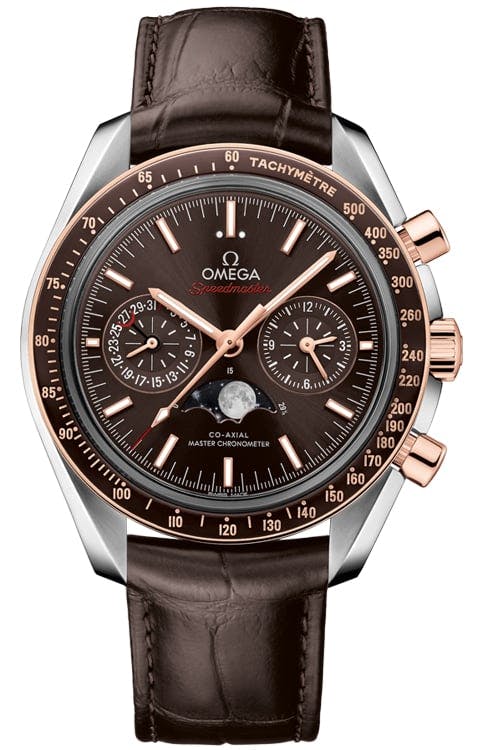 The Omega Speedmaster Moonwatch is the ideal host for a moon phase display. After all, it was the watch that accompanied the first manned Moon landing! This stainless steel chronometer has a Co-Axial escapement and features an original NASA photograph of the Moon on the moon phase’s crystal disc. The in-house calibers 9904 and 9905 each feature precise moon phase displays that only require adjustment every 10 years. When it’s due, you can simply adjust the moon phase via the crown. The stainless steel version costs around 8,000 euros new, and 6,000 euros pre-owned. 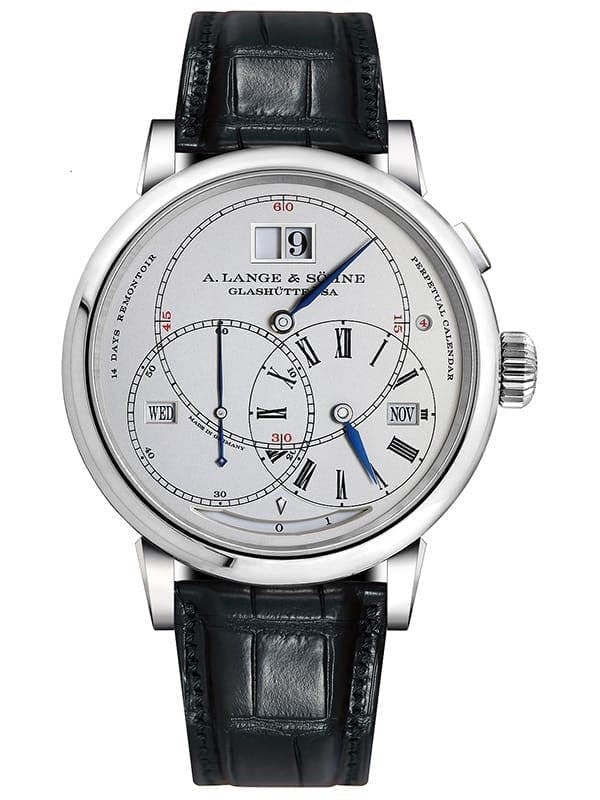 German manufacturer A. Lange & Söhne launched the Terraluna at the 2014 SIHH. The front of the timepiece is reminiscent of the “Pour le Merite,” but the reverse side features a so-called “orbital moon phase.” Three rotating discs show the position of the Moon in relation to the Earth and the Sun. The Earth sits at the middle of the display and makes one full rotation on its axis each day. The polished balance wheel represents the Sun. The watch will display the exact solar and lunar eclipses for the next 1,058 years without any need for adjustment. The A. Lange Terraluna is available in white or rose gold. Both versions have list prices around 150,000 euros. 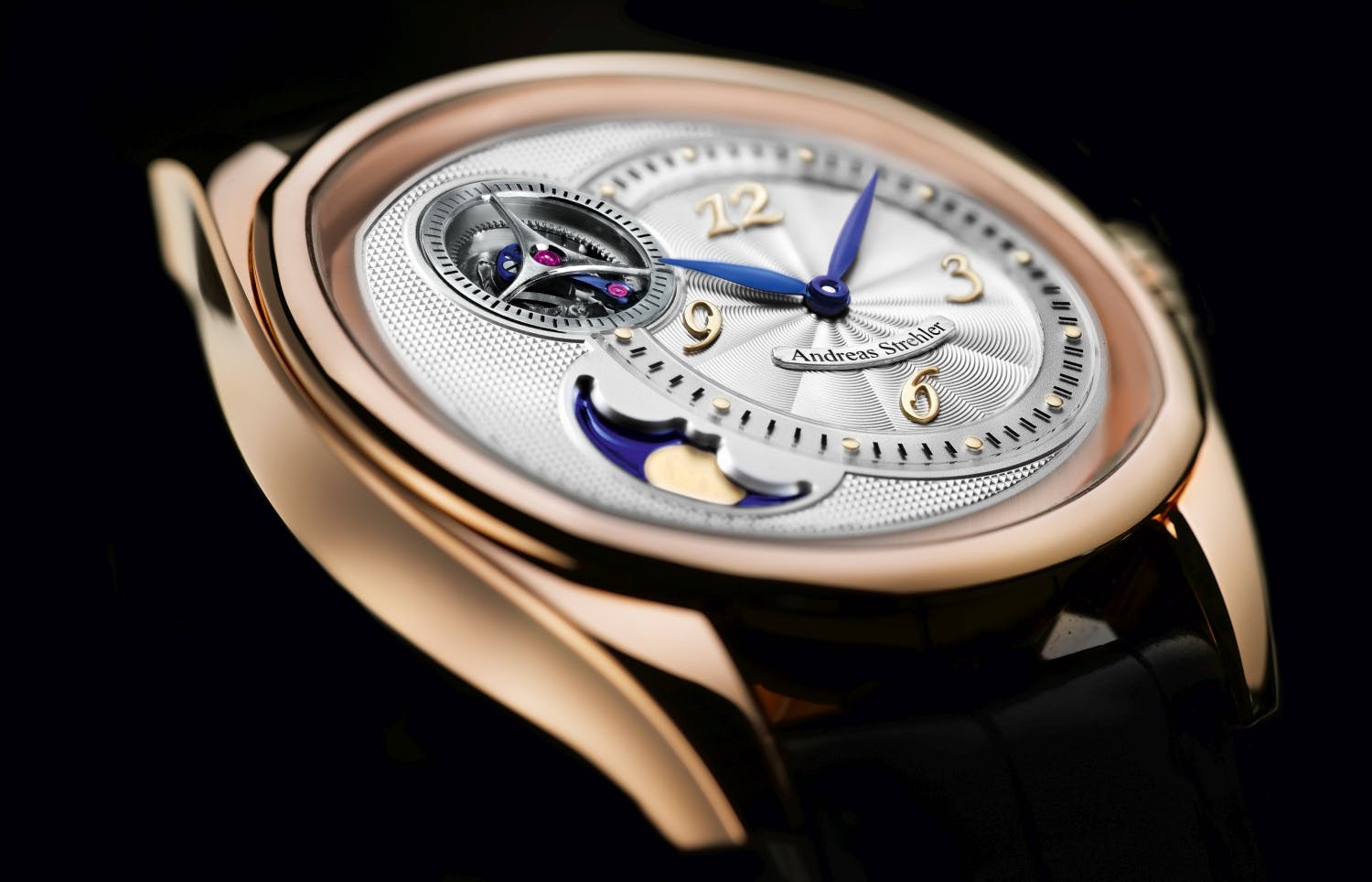 The Sauterelle à Lune Exacte from watchmaking genius Andreas Strehler is arguably the most accurate mechanical lunar complication to date. The Lune Exacte features a patented, highly-precise moon phase that displays the lunar cycle in 3-hour increments. This watch is the successor to the Sauterelle à lune perpétuelle, a watch that earned Andreas Strehler an entry into the Guinness Book of World Records. The record-setting watch has a moon phase display that only deviates by one day every two million years. Strehler has managed to perfectly present the technical intricacies of the Sauterelle à Lune Exacte in a seemingly organic design. The list price is approximately 150,000 euros. 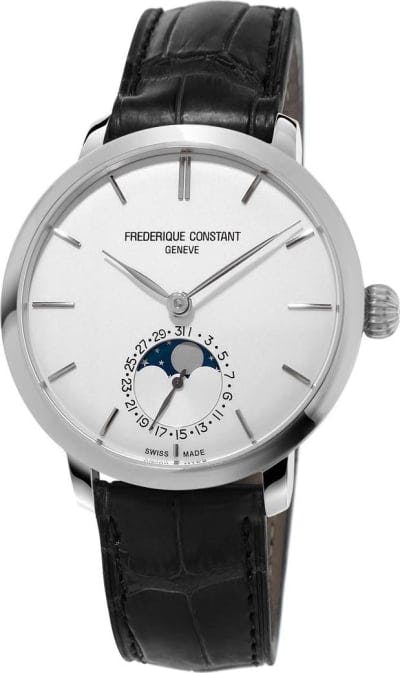 The Frederique Constant Slimline Moonphase is a slightly more affordable option. This watch’s moon phase display is located at 6 o’clock as part of a subdial that also displays the calendar date. You can manually adjust the moon phase via the crown. This 42-mm watch is available in stainless steel or with rose gold plating. It features convex sapphire glass and a transparent case back. You can purchase this dress watch with an automatic, in-house movement for around 3,000 euros new. Buying a pre-owned version will cut that price in half.

Everything You Need to Know about Supermoons

I'm Tomas, and I've been working for Chrono24 for several years now. The first watch I ever bought was a quartz Casio tool watch with an altimeter. When my father …