Many watches feature date displays; some even account for the day of the week, month, calendar week, or leap year. If your watch has an annual or perpetual calendar, you don’t even have to adjust the date each month for watches. But how long do these complications remain accurate?

To begin, let’s take a look at how luxury watches typically go about displaying the day, week, month, and year. The most straightforward way to display the current date is via a date window on the dial. Some brands, including Rolex, magnify their date window using a special lens. Several Glashütte-based brands, such as A. Lange & Söhne, use an outsize date or panorama date display. Others, including NOMOS, Hamilton, and Breitling, stick to the classic date window. Many brands place a day display to the left of the date window at the 3 o’clock position, or at 12 o’clock – it rarely gets positioned elsewhere. The weekday is often displayed in abbreviated form and in multiple languages. The Rolex Day-Date even has its display windows in its name. Junghans, Sinn, and Patek Philippe (as of Baselworld 2019) all display the calendar week on the dial alongside other calendar displays. 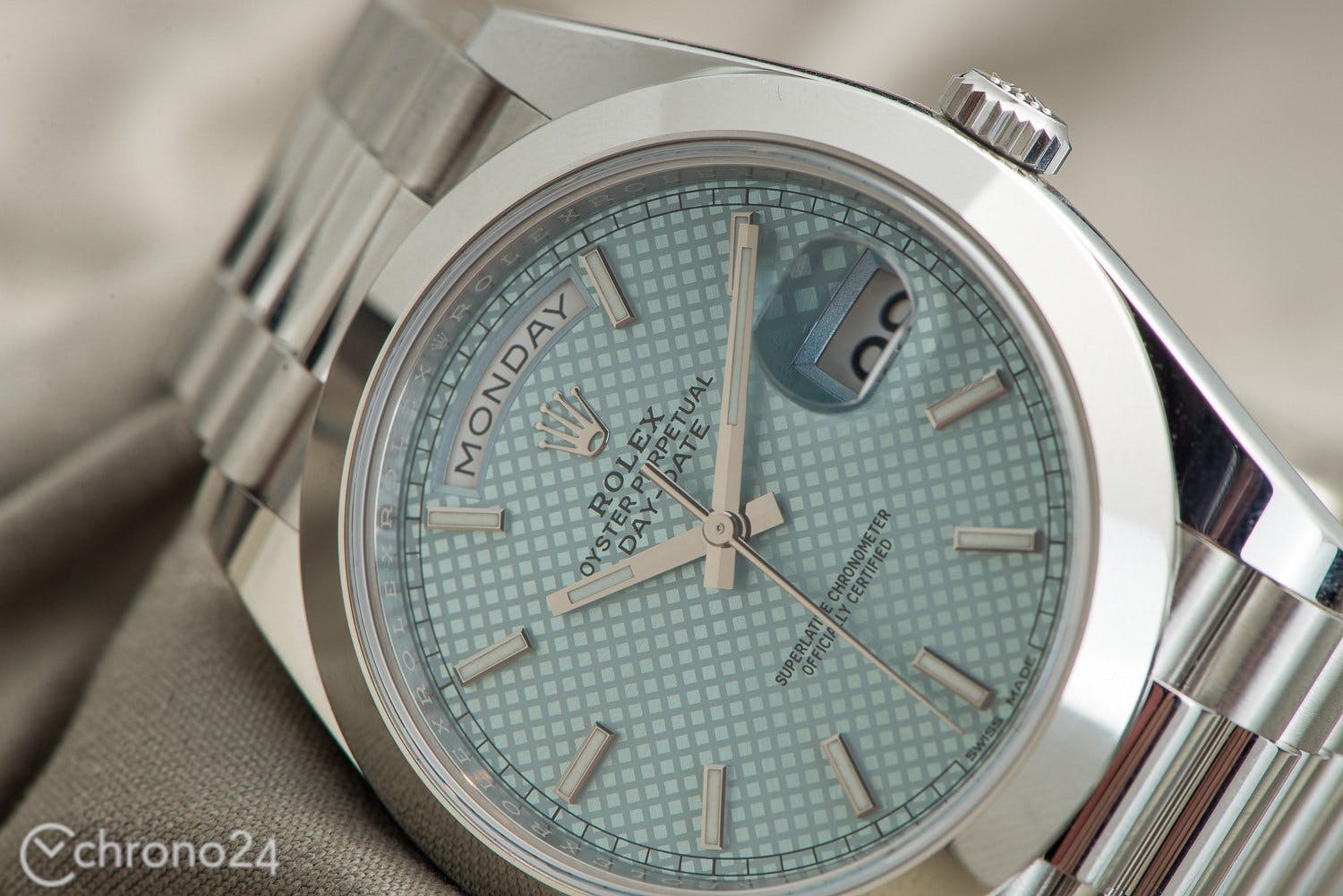 The majority of these watches require users to manually adjust the date at the end of any month with fewer than 31 days. This is typically done via the crown or a special push-piece. If you have a watch with an annual calendar, however, you only need to adjust the watch once a year at the end of February. Patek Philippe releasedthe first ever annual calendar in 1996. Perpetual calendars, on the other hand, run completely independently for much longer. A good example of this type of watch is the Rolex Oyster Perpetual Sky-Dweller.

The perpetual calendar complication follows the Gregorian calendar. Pope Gregory XIII introduced this updated calendar in 1584. Today, it’s followed by most countries across the globe. The calendar features a leap year every four years to account for discrepancies between the solar year and the 365-day calendar. However, the leap year does not occur if the year is divisible by 100. To make things a bit more complicated, this rule does not apply in years divisible by 400.

Perpetual calendar movements are able to account for variations in the number of days each month, including leap years. That means you have to adjust it in years that are divisible by 100 but not in those divisible by 400. Watch engineers are able to achieve this using a special year wheel. At the end of every month with less than 31 days, the wheel is turned two or three more notches via a complex lever system. This complexity affords the perpetual calendar a place next to the tourbillon and minute repeater as a grand horological complication. 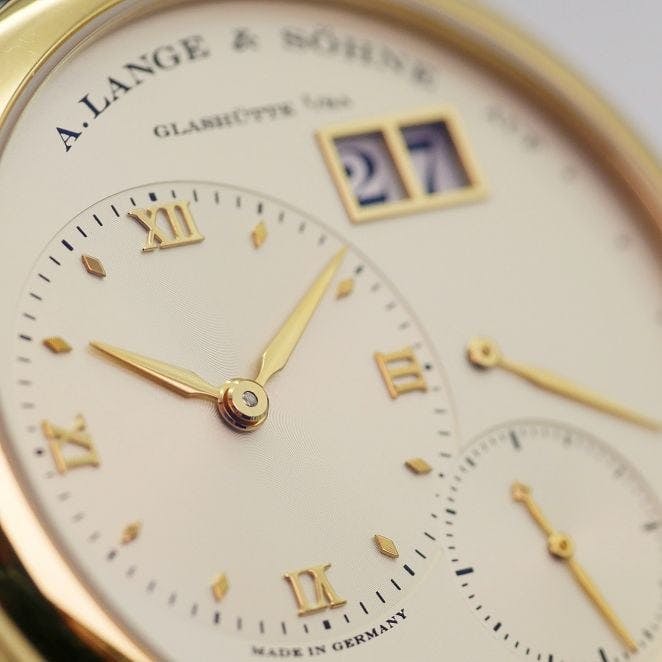 The year 2100 will not be a leap year even though one will occur every four years up until then. Complex as they are, perpetual calendar movements cannot account for this deviation from the norm without manual adjustment. The manufacturer Andersen Genève, however, has created a movement with a so-called secular perpetual calendar that only requires adjustment every 400 years, meaning the next required correction will come in 2400.

The Original: From the Patek Philippe 97 975 to the Sky Moon Tourbillon

The traditional watchmaker released another perpetual calendar watch in 2001, called the Sky Moon Tourbillon. It is considered one of the most complicated watches of all time. In addition to a retrograde perpetual calendar, the watch has a minute repeater, tourbillon, sidereal time display, star chart, moon phase display, and solar time display. You can call this watch your own for some 1.7 million USD. 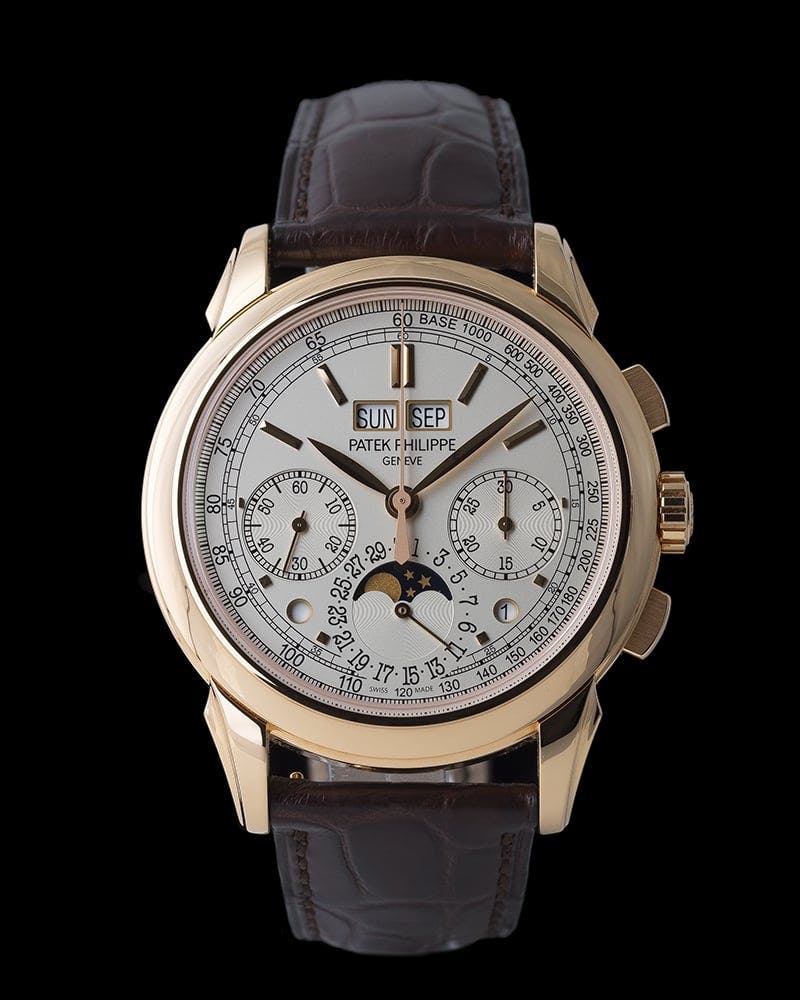 For close to 110,000 USD, you can buy the relatively more affordable Patek Philippe Perpetual Calendar Chronograph reference 5270R. Since 2011, this watch has been powered by the manual in-house caliber CH 29-535 PS Q – the first manufacturer chronograph caliber with a perpetual calendar.

The classic Patek Philippe Perpetual Calendar model is typically priced below 110,000 USD, making it the entry-level model in the series. Released under reference number 5320G, this model is powered by the automatic in-house caliber 324 S Q and features month, leap year, day/night, and day of the week displays. 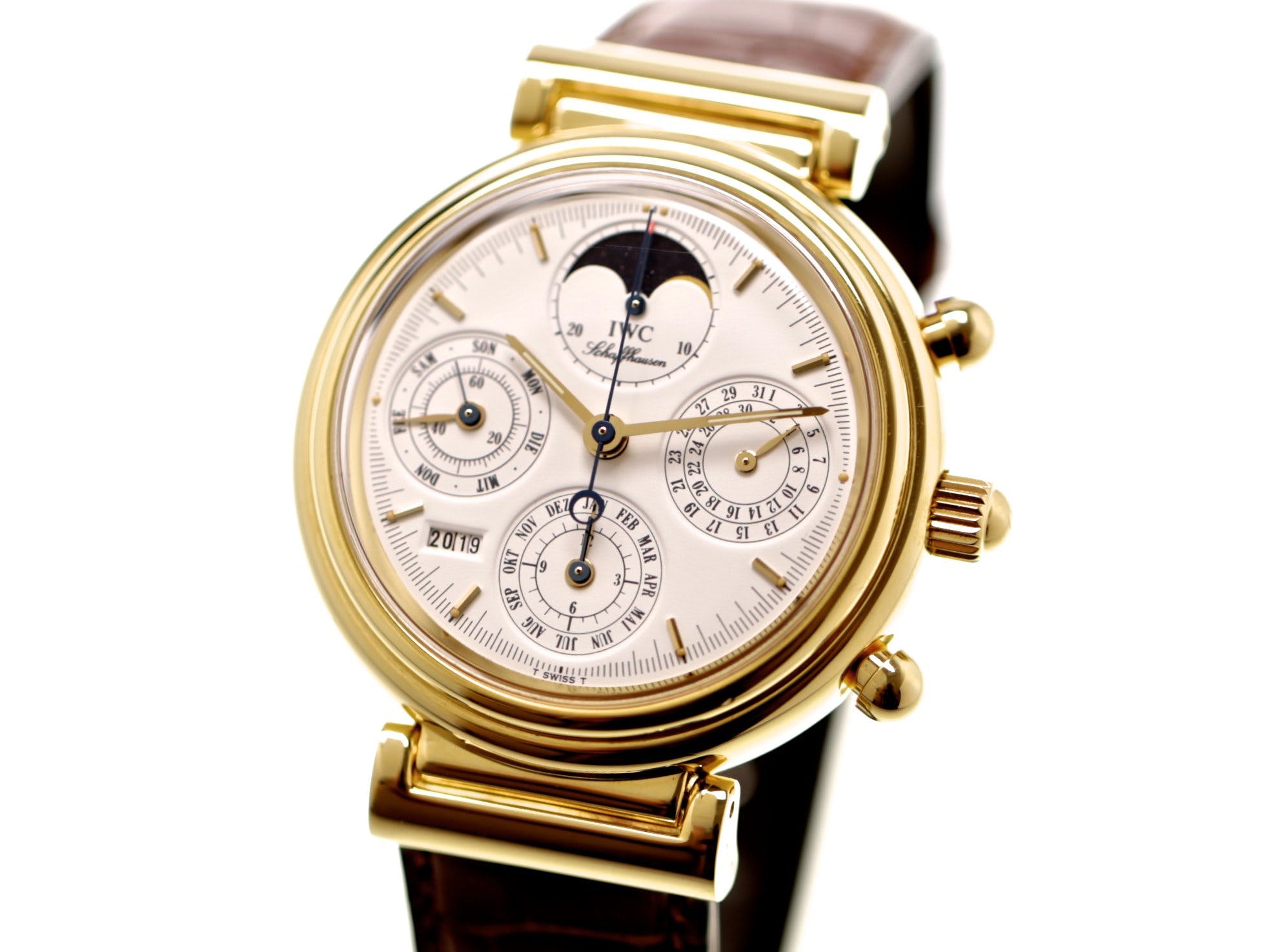 IWC also boasts several watches featuring perpetual calendars that are highly regarded among enthusiasts. The IWC Portugieser, Da Vinci, and Big Pilot models are particularly popular. Prices for the Portugieser with a perpetual calendar begin around 22,000 USD. Included with the watch is a century slide that will remain accurate until 2499. Even more remarkable are the models with the double moon phase display for the Northern and Southern Hemispheres. These watches feature a four-digit year display between 7 and 8 o’clock. The subdial at 9 o’clock displays the day of the week, the month is displayed at 6, and the date display is integrated into the power reserve display at 3 o’clock. Powered by the in-house caliber 52615, these watches are 44 mm in diameter. The platinum version costs around 56,000 USD. 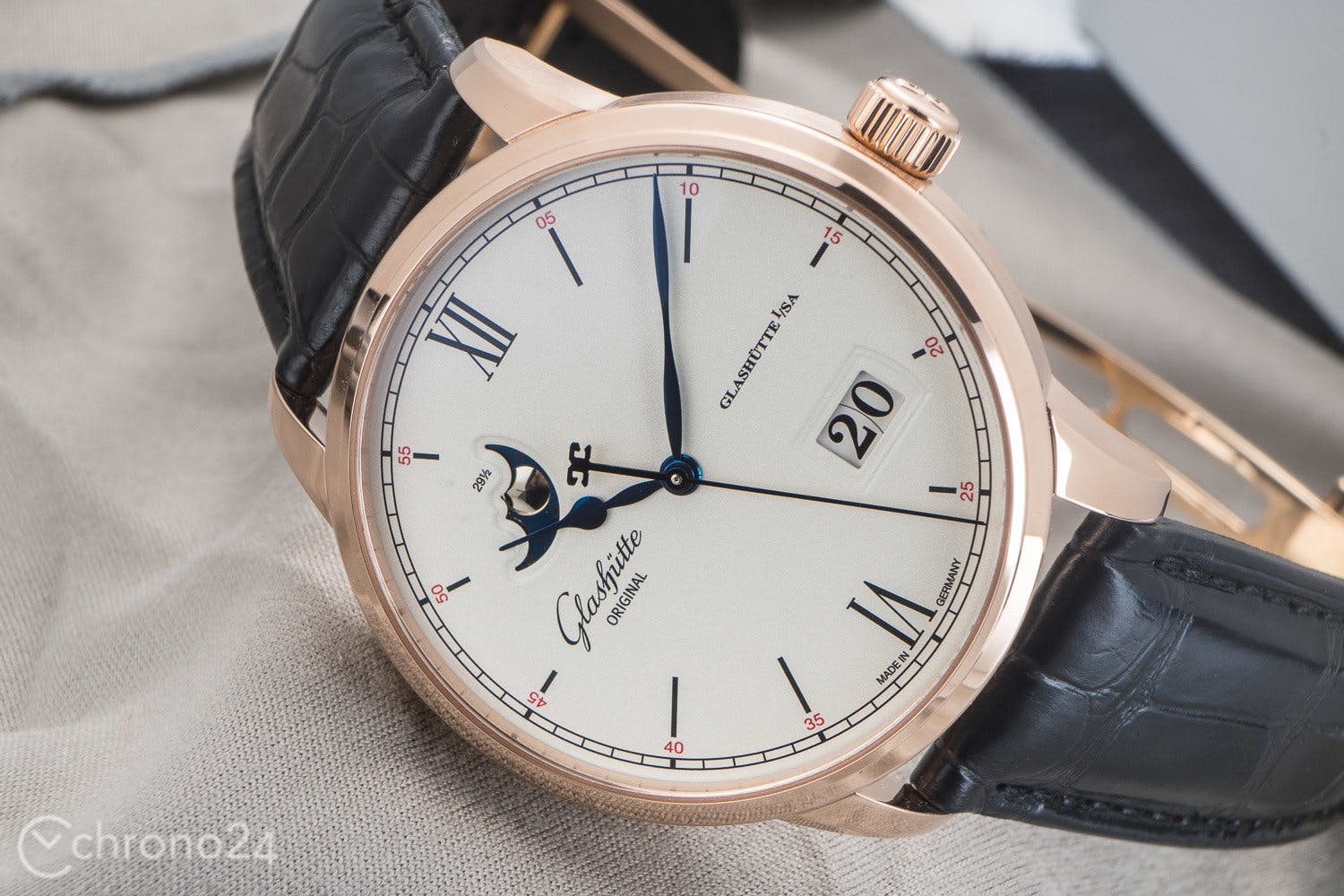 The Richard Lange Terraluna is truly a masterpiece of haute horlogerie. The watch was released in 2014 by the Glashütte-based watchmaker A. Lange & Söhne. It features a perpetual calendar alongside an orbital moon phase display. The reverse side showcases the position of the sun above the barrel; in 1,058 years, the position of the Sun relative to the Moon and Earth only deviates by one day. The series is exclusively available in white gold and costs around 167,000 USD. The Glashütte Original Senator Perpetual Calendar boasts a simple moon phase display at the 8 o’clock position and the typical Glashütte outsize date display, similar to A. Lange models. A stainless steel version of this watch will set you back some 28,000 USD.

The Development of the Automatic Movement – Part 1

I'm Tomas, and I've been working for Chrono24 for several years now. The first watch I ever bought was a quartz Casio tool watch with an altimeter. When my father …