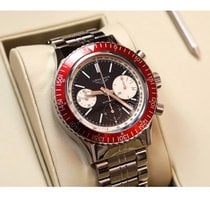 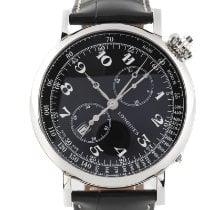 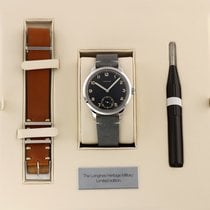 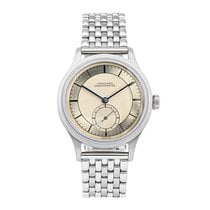 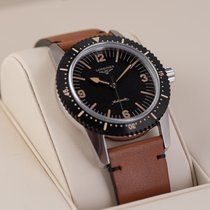 The Longines Heritage collection is home to superb watches with a historical flair. These timepieces range from pilot's and diving watches to chronographs and dress watches. The designs are largely inspired by models from Longines' long history.

As the world's oldest registered watch manufacturer still in operation, Longines has an impressive catalog of historical timepieces. Today, many of these watches are considered groundbreaking icons, including the Charles Lindbergh Hour Angle Watch and the 24-hour watch developed for Swissair pilots.

The Heritage collection pays tribute to many of these classic models. In terms of design, these new watches follow closely in their historical predecessors' footsteps. However, most of these timepieces house modern mechanical calibers, including movements built exclusively for Longines by ETA. There are also women's models with quartz ETA calibers available.

The many retro watches of the Heritage collection range from differently shaped timepieces inspired by the 1960s and 70s to diving watches based on models from the 1950s and military watches with ties to the 1930s. There are even pilot's watches that can trace their roots back to 1918. Of course, you'll also find remakes of industry legends like the Weems Second-Setting Watch, Charles Lindbergh's watch, and the vintage Conquest.

Longines usually includes a year in the name of these watches. This makes it easy to tell the production year of that particular timepiece's direct ancestor.

How much does the Longines Heritage cost?

Longines has been producing navigation and pilot's watches since the early 20th century. The Heritage 1918 bears a strong resemblance to the brand's earliest pilot's watches thanks to its pivoting looped lugs, cathedral hands, stylized Arabic numerals, and small seconds at 6 o'clock. The automatic ETA movement 2895-2 provides this 41-mm stainless steel timepiece with a date display, also at 6 o'clock. Prices for this historically accurate watch range from around 1,200 USD pre-owned to 1,600 USD new.

The Avigation Watch Type A-7 1935 is a close cousin of the Heritage 1918. Much of its design follows watchmaking conventions from the 1920s. However, what makes this timepiece truly striking is its dial, which Longines has rotated 40 degrees to the right. This allowed pilots to tell the time without having to take their hands off the controls. What's more, this watch also features a chronograph function. A push-piece integrated into the crown controls this feature. It can measure times of up to 30 minutes using a chronograph seconds hand and a counter at 12 o'clock. The version with a white dial sells for about 2,800 USD. There's also a more exclusive version with a black dial. This rare timepiece requires an investment of roughly 4,900 USD.

A cushion-shaped case and fluted bezel give the Heritage 1935 a much more modern feel. Plain Arabic numerals further add to this impression, especially since this numeral style is a popular choice for today's pilot's watches. These stark white numerals also contrast beautifully against the black dial. Furthermore, the cathedral hands and numerals both glow in the dark. A small seconds and date display at 6 o'clock round off this timepiece. You can purchase a never-worn Heritage 1935 on Chrono24 for around 1,600 USD, while well-maintained models demand approximately 1,500 USD.

The Heritage collection contains one of Longines' flagship models, the Hour Angle Watch , which can trace its roots back to the pioneering aviator Charles Lindbergh. In fact, Longines built the watch using Lindbergh's own designs. Originally released in 1931, current Hour Angle timepieces are nearly identical to their historic predecessors. The dial features numerous scales that enabled Lindbergh to keep track of his position on his record-setting journeys. Internationally, this 47.5-mm stainless steel watch is known as the "Lindbergh Hour Angle." The current version is listed under the reference number L2.678.4.11.0 and costs roughly 3,600 USD. Longines also regularly releases limited editions in honor of Lindbergh's history-making transatlantic flight. Depending on the model, these collector's items sell for anywhere from 4,600 to 10,500 USD.

Lindbergh's Hour Angle Watch was actually based on another legendary Longines creation: the Weems Second-Setting Watch. The Swiss manufacturer developed this watch in the 1920s in cooperation with American pilot and navigational instructor Philip Van Horn Weems. This timepiece features a button-operated mechanism that allows the wearer to synchronize the time to a radio signal. The Weems Second-Setting Watch comes with a white dial and your choice of black Arabic numerals or Breguet-style Roman numerals. In terms of material, this watch is available in stainless steel or rose gold. Plan to spend around 3,300 USD on the stainless steel version. The rose gold edition changes hands for about 10,500 USD.

Longines has a long history of producing chronographs, which is why so many Heritage models have a stopwatch function. One example is the Heritage Column-Wheel Single Push-Piece from 2015. As its name implies, this retro watch's chronograph function is operated via a single pusher. In this case, it is integrated into the crown. The automatic caliber L788, a modified version of the ETA A08.L11, powers this timepiece. This movement features a column wheel mechanism and can measure periods of time of up to 30 minutes. You can keep track of the elapsed time using the chronograph seconds hands and a counter at 3 o'clock. A date display at 6 and small seconds at 9 o'clock complete the dial. This 41-mm stainless steel watch comes with a black or white dial and demands anywhere from 2,100 to 3,100 USD.

If you're a fan of traditional chronographs with three subdials, you may enjoy the Heritage Column-Wheel Chronograph. This watch joined the Heritage family in 2018 and displays the elapsed time across two subdials at 3 and 6 o'clock and a chronograph seconds hand. A third subdial sits at 9 o'clock and serves as a small seconds. The central set of dauphine hands are a clear nod to 1950s watch design. The caliber L688 (ETA A08.L01) ticks away inside the 39-mm case and provides this timepiece with its chronograph function and a date display between 4 and 5 o'clock. Longines pairs the rose gold edition of this column-wheel chronograph with a crocodile leather strap. This model costs around 7,100 USD. At 1,800 USD, the stainless steel version is much more affordable.

The Heritage Avigation BigEye also gets its power from the caliber L699. However, Longines has removed the date on this pilot's chronograph. This 41-mm stainless steel watch is based on timepieces from the 1940s and sells for roughly 2,200 USD.

The Conquest Heritage pays tribute to the first Conquest model from the year 1954. This simple three-hand watch features dauphine hands, wedge indices, and a date display at 12 o'clock. Longines offers the Conquest Heritage in two sizes, 35 and 40 mm, making it a great choice for all wrist sizes. What's more, you can also choose between a black or white silver-plated dial and a stainless steel or rose gold case.

Prices for 35-mm stainless steel watches begin around 930 USD on Chrono24, while the 40-mm edition costs approximately 1,500 USD. The more luxurious gold editions require an investment of about 3,600 USD.

Longines produced a steady stream of military watches throughout the 1930s and 40s. Tidy, easy-to-read dials characterize these timepieces. These designs survive to this day in the form of the Heritage Military, Heritage Military 1938 , and Heritage 1945. All three models are three-hand watches, though they vary as to whether there are three central hands or two central hands with a small seconds at 6 o'clock. In 2018, Longines released a version of the Military 1938 with a GMT function. You can also choose between a black or white dial with contrasting white or black numerals, respectively.

Heritage military watches require an investment of around 1,500 USD.

The Heritage collection is also home to diving watches, including the Diver 1967. This watch is water-resistant to 30 bar (300 m, 984 ft). Perhaps its most striking feature is its rotatable red bezel. The Diver 1967 houses the chronograph caliber L688.2 inside its 42-mm stainless steel case. A new watch costs around 2,400 USD.

The Legend Diver offers a more affordable alternative. Instead of a traditional bezel, this model features an internal rotating bezel for setting and monitoring dive times. You can operate the internal bezel using the extra crown at 2 o'clock. The Legend Diver is available as a 36 or 42-mm watch and with a black or white dial. A leather strap, stainless steel bracelet, or matching rubber strap holds each timepiece securely on the wrist. You can purchase a Legend Diver for about 1,800 USD.

Longines released yet another retro diving watch in 2018: the Heritage Skin Diver. Its design was inspired by the company's very first diving watch, the Nautilus Skin Diver from 1959. Like its predecessor, the Heritage Skin Diver comes with a black bezel, a black dial with luminous beige indices, and an hour hand with a distinctive arrow-shaped tip. Its 42-mm stainless steel case features a steel case back and a screw-down crown. The final watch is water-resistant to 300 m (30 bar, 984 ft). Longines mounts this timepiece on a rubber strap, Milanese stainless steel bracelet, or leather strap. Prices depend on the band and sit between 2,000 and 2,300 USD.

Retro dress watches also make an appearance in the Heritage collection. The rose gold Présence Heritage is a particularly fine example. Playful Arabic numerals and tempered blue Breguet hands adorn its white silver-plated dial. The 34 and 38.5-mm editions also feature a small seconds at 6 o'clock, while the 26.5-mm version has a central second hand. Expect to pay between 1,900 and 2,400 USD for one of these timepieces.

The Flagship Heritage is a stunning recreation of classic Longines dress watches from the 1950s. Its silver dial radiates restrained elegance with its narrow, gold-plated line indices and dauphine hands. The date and small seconds at 6 o'clock only enhance the effect. The high-quality brown leather strap is the perfect complement to this chic timepiece. Prices for the Flagship Heritage range from 1,200 to 1,600 USD, depending on its condition.