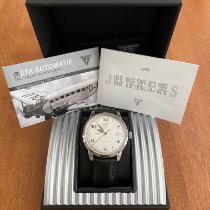 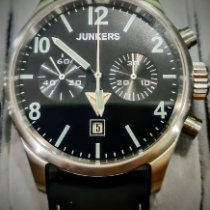 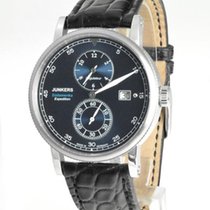 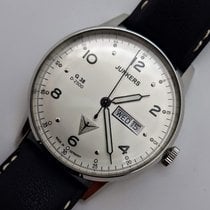 Junkers: High-Quality Watches, Made in Germany

The German watch brand Junkers is famous for their classic yet affordable pilot's watches. Top models feature a chronograph function and have been certified as chronometers in Glashütte. They also produce timeless Bauhaus watches.

5 Reasons to Buy a Watch from Junkers

Inspired by Pioneers of Aviation

Junkers watches are best described as easy to read, reliable, and affordable. Owned by the German company PointTec Electronic GmbH, this brand is best known for its sporty pilot's watches. Matte black dials and luminous hands, indices, and numerals define these timepieces. However, they also produce timelessly elegant Bauhaus-style watches.

The best Junkers watches come with a chronometer certificate issued by the German chronometer testing facility in Glashütte. These timepieces house extremely accurate automatic Swiss calibers, some of which have a chronograph function. Most of Junkers' other mechanical watches use more affordable Japanese Miyota movements . These movements are considered very reliable and offer exceptional value for money. Junkers also crafts especially precise and affordable quartz watches with battery-powered movements imported from Switzerland or Japan.

Many people associate the Junkers name with the famous Junkers Ju 52 cargo and passenger aircraft from the 1930s. Also known as Tante Ju (Aunt Ju) and Iron Annie, the watch manufacturer has dedicated multiple collections to this historic aircraft, including the Cockpit Ju 52, Tante Ju, and Iron Annie Ju 52. One of the main features of this three-engined plane is its corrugated iron paneling. Today, the Ju 52 is among the most famous aircraft ever to come from Germany.

How much do Junkers watches cost?

Chronometer-certified watches are the highlight of the Junkers catalog. These timepieces have classically elegant designs, making them a great companion at the office. Each is powered by one of three ETA calibers: the 2826-2, Valgranges A07.161, or Valjoux 7753. The 7753 has a chronograph function for measuring periods of up to 12 hours and a date display between 4 and 5 o'clock. This chronometer-certified chronograph has a list price of 2,299 euros (approx. 2,600 USD). You can save around 1,100 USD by purchasing the three-hand edition with the caliber 2826-2. The model with the Valgranges A07.161 and a power reserve display costs about 2,000 USD.

How much do pilot's watches in the Hugo Junkers collection cost?

The pilot's watches of the Hugo Junkers collection are a mix of classic and modern design. Their hands, numerals, and indices resemble those found in the Pilot's Watches collection from the International Watch Company (IWC). You can choose from quartz or mechanical models worn on a leather strap or stainless steel bracelet. The mechanical movements come from either the Japanese manufacturer Miyota or the Swiss company ETA.

Quartz watches with a GMT function are the most affordable and sell for as little as 230 USD. Three-hand pieces with an automatic Miyota movement, date display, and stainless steel bracelet cost about 280 USD new. Chronographs powered by Swiss quartz movements from Ronda demand some 30 USD more. The ETA 2826-2 ticks away inside this collection's top models. You can purchase a mint-condition timepiece for around 850 USD.

If you prefer more traditional pilot's watch designs, you should take a look at the Cockpit Ju 52 and Iron Annie Ju 52 collections. The large crowns of the Cockpit Ju 52 are a nod to early pilot's watches from an era when pilots needed to operate their watches while wearing gloves. Leather straps only enhance the classic feel of these pilot's watches. Junkers outfits each timepiece with a quartz or automatic caliber. Mint-condition quartz watches with a date display or GMT function often cost less than 230 USD. You'll find quartz chronographs for around 270 USD, while automatic models powered by the Miyota caliber 821A change hands for about 230 USD.

The main features of the Iron Annie Ju 52 are its large Arabic numerals and a dial modeled after the corrugated iron panels found on the Ju 52. Basic quartz Iron Annie Ju 52 watches cost under 230 USD, while prices for quartz chronographs sit around 280 USD. The most affordable automatic version demands some 320 USD. Expect to pay around 850 USD for a model with an ETA movement. This collection's most expensive timepiece is the chronograph with the automatic Valjoux caliber 7753, which sells for just under 1,700 USD.

The Junkers Bauhaus collection contains minimalist watches with timeless designs. They truly embody the tenet of form following function. Narrow hands, long hour indices, and small dots for the minute scale define the look of these timepieces. Some models combine both indices and Arabic numerals to mark the hours. The dials come in beige, black, anthracite, or silver.

The Junkers logo – known as "Der Fliegende Mensch" or "the flying man" – sits just above 6 o'clock on the dial of most models. On chronographs, this position is occupied by a 12-hour counter. There are also models with a power reserve indicator at 12 and a 24-hour display at 6 o'clock. The Miyota caliber 9132 drives these automatic timepieces. New, these watches sell for around 500 USD. Those looking for a simpler design should turn to the three-hand versions with a date display, which cost about 450 USD.

Junkers equips the chronographs with quartz Ronda movements, resulting in prices as low as 270 USD. Quartz three-hand watches with a date display are even more affordable at under 230 USD. At the upper end of the price range, you'll find manual watches with a small seconds dial. The Swiss ETA caliber 7001 ticks away inside these timepieces. Plan to spend around 900 USD for one of these watches.

How much do watches in the G38 collection cost?

Junkers pays homage to the largest aircraft to navigate the skies in the 1930s, the Junkers G38, with their G38 collection. This four-engined transport aircraft had thick wings, which housed the engines, fuel, and even some passengers.

These wristwatches have a timeless, retro design dominated by Arabic-numeral hour markers. A railroad minute scale further underscores the retro look of some models. Thanks to their gold-plated cases, certain watches feel especially elegant and classic. You can choose from a silver, black, or beige dial. Luminous hands also guarantee you can always tell the time, even in the dark.

Both F13 collections are also dedicated to historic aircraft. The Eisvogel F13 series pays tribute to the eponymous airplane that made the first flight headed toward the North Pole from the Norwegian island of Spitzbergen in 1923. Like the G38 watches, F13 timepieces have retro designs defined by their Arabic numerals, narrow hands, and delicate minute scales. The dials are available in black or silver, while the leather straps come in black or brown. There are also watches with a stainless steel Milanese bracelet and gold-plated case.

The most expensive Eisvogel F13 watches use the Swiss Sellita caliber SW 290. This movement features a small seconds dial and date display. Expect to pay around 900 USD for one of these timepieces. You can get a three-hand edition with a central second hand and date display at 2 o'clock for about 340 USD less. The Sellita SW 200 powers these models. Starting around 280 USD, quartz watches require the smallest investment.

The retro watches of the Spitzbergen F13 series are also inspired by flights over the Arctic. Beige dials and a railroad minute scale around the edge of the dial increase the vintage feel of these timepieces. The Miyota caliber 9132 ticks away inside this collection's top model, which has a power reserve indicator and 24-hour display, as well as a date display at 3 o'clock. Be sure to have around 540 USD on hand for this timepiece. As usual, the quartz editions are much more affordable: You can purchase a chronograph for less than 340 USD and a three-hand watch with a date display for under 230 USD.

Junkers was founded in the southern German state of Bavaria in 1988. The watch manufacturer PointTec first began releasing watches under the Junkers name in 1998. PointTec also owns the brands Zeppelin, Iron Annie, and Maximilian. The company has always specialized in crafting pilot's watches using high-quality movements from Switzerland or Japan. Every timepiece is manufactured in Germany.