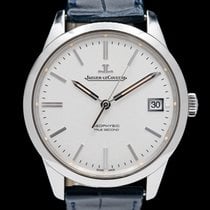 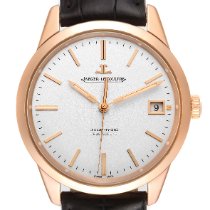 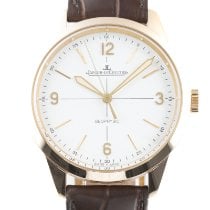 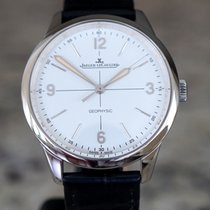 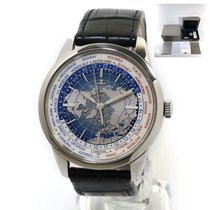 The Geophysic: An Understated Travel Companion

The Universal Time stands out thanks to its splendid dial featuring the world map from a unique perspective: The North Pole is in the center and the continents surround it. The axis for the hour, minute, and seconds hands is located at the North Pole. The oceans are painted blue, while the raised continents are either silver or gold, depending on whether the case material is stainless steel or pink gold, respectively.

You can purchase a new stainless steel world time watch (reference number 8108420) for about 10,000 euros, while a new pink gold version costs around 17,000 euros. The Universal Time has a case diameter of 41.6 mm, a standard size for men.

The Universal Time uses two discs on the edge of the dial to tell the time in multiple time zones. The inner disc features a 24-hour scale and is rotatable; the outer disc is immobile and features 24 city or island names representing each time zone. London, the city located at the prime meridian which represents Greenwich Mean Time (GMT), is at six o'clock. The prime meridian is depicted on the map as a dashed line. If you use the crown to set the proper time in London on the 24-hour scale, then the watch will automatically display how late it is in cities around the world, such as in Bangkok, New York, and Sydney. The three central Universal Time hands are used to display the local time.

The second version of the Geophysic, the True Second, has a very different look than the Universal Time. The True Second features a white dial with stick indices, baton hour and minute hands, a delicate seconds hand, and a date display at three o'clock. However, there's a curious extra to this understated watch: The seconds hand jumps forward in one-second increments like a quartz watch even though it's powered by a mechanical movement.

An original Geophysic E168 from 1958 is an especially rare timepiece; its condition determines its price. However, you could easily spend over 25,000 euros on this watch.

The caliber 770 powers the True Second. It doesn't include a world time feature, but at 275 components, it's slightly more intricate than the 772 caliber. Both movements have a power reserve of 40 hours.

In Honor of the International Geophysical Year

The Geophysic was introduced in 1958 on the occasion of Jaeger-LeCoultre's 125th anniversary and in conjunction with the International Geophysical Year. The year, which ran from July 1, 1957, to December 31, 1958, focused on international collaborative scientific research between 67 countries in a variety of fields including meteorology, oceanography, and seismology.

Jaeger-LeCoultre introduced the perfect watch for the event: the Geophysic E168. The timepiece was up to chronometer standards and had a movement based on JLC's military calibers; it was also protected against magnetic fields. A dress watch version, the Deluxe, didn't feature protection from magnetic fields, but had a case made of yellow and pink gold. The first Geophysic models were only produced for about a year. In 2014, Jaeger-LeCoultre reissued the 1958 retro special edition and a year later, they reintroduced the Geophysic as its own contemporary collection.