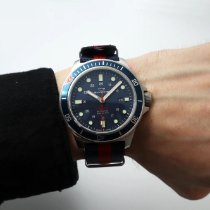 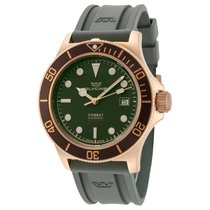 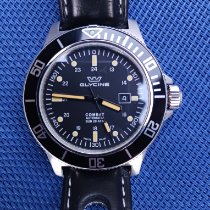 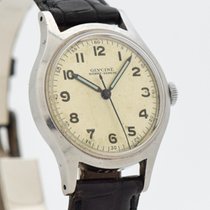 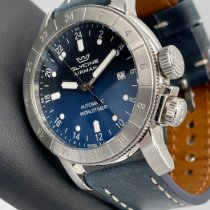 The Swiss watch manufacturer Glycine is famous for their functional pilot's and diving watches. Their flagship collection, the Airman, propelled the company into the spotlight as one of the first pilot's watches with a second time zone.

4 Reasons to Buy a Glycine Watch

Glycine has been crafting functional tool watches with minimalist designs since 1914. The Airman collection of pilot's watches has been a keystone of the Glycine catalog since its debut in 1953. What's more, the Airman was one of the first watches ever to feature a 24-hour display with a second time zone, making it the ideal companion for pilots. Current top models are made of bronze and boast a third time zone. Glycine also offers plenty of retro models based on historical Airman timepieces for fans of vintage watches. Certain editions are highly limited, such as the Airman 40 No1. Only 1,000 copies exist of this timepiece.

The Combat is the other important Glycine collection. It contains a wide range of diving watches with unidirectional bezels and a depth rating of 200 m (20 bar, 66 ft). The most impressive models are water-resistant to 500 m (50 bar, 1,640 ft) and come with a helium escape valve. These timepieces are suitable for saturation diving. There are also sporty yet elegant Combat dress watches with a golden hue or leather strap. These timepieces look great paired with business attire.

How much do Glycine watches cost?

The Airman has been one of Glycine's most successful models since the 1950s. By the early 1960s, the company was producing around 60,000 of these pilot's watches annually. Many members of the U.S. Air Force wore a Glycine Airman while serving in Vietnam. Pete Conrad took things a step further on 1965's Gemini 5 mission, wearing his Airman into outer space. Conrad later went down in history as the third man to step on the Moon during the Apollo 12 mission, albeit without a Glycine watch on his wrist.

The idea behind a pilot's watch with a 24-hour display and two time zones arose during a flight between Bangkok and Kolkata. On that flight, sales representative Samuel W. Glur joined the pilots in the cockpit of the DC-4 and began talking about watches. The pilots told Glur that the ideal pilot's watch should be automatic, water-resistant, and have a 24-hour scale and a bezel with a second time zone. Charles Hertig, then-owner of Glycine, took on the challenge and ended up developing the Airman, which has remained in uninterrupted production since its release in 1953.

Today, the Airman collection contains men's and women's watches, as well as retro models inspired by historical timepieces. Each watch features a screw-down crown at 4 o'clock for locking the bezel in place. By unscrewing the crown, you can rotate the bezel in both directions. The other crown at 3 o'clock is used to set the time and date. In terms of size, you can choose from a relatively small 36-mm case, a moderate 40 or 42-mm case, or a rather large 44 or 46-mm case.

Airman Airfighter chronographs are among this collection's most exciting timepieces. They feature a sliding chronograph actuator for starting, stopping, and resetting the stopwatch function.

Bronze watches have experienced a boom in popularity in recent years, which is why many manufacturers have added them to their repertoire – Glycine included. Their Airman 44 Bronze will develop its own unique patina over time. The Swiss manufacturer offers this model with a brown or blue dial and matching strap. Like its stainless steel counterparts, this bronze watch features a 24-hour dial, a date display at 3 o'clock, and a rotatable bezel with a 24-hour scale. The caliber GL293 ticks away inside its case. This movement is based on the ETA 2893-2 or Sellita 300-1 and has a 42-hour power reserve. A mint-condition piece with a brown dial and strap costs around 1,400 USD. The blue edition is less expensive, with some pieces selling for under 1,100 USD. You can save even more by purchasing a pre-owned model.

If you're in the market for a retro Glycine Airman, look no further than the Airman Vintage series. These timepieces are each 36 or 40 mm in diameter. The smaller models are the same size as the original watches from the 1950s. The Airman No1 bears a particularly strong resemblance to the earliest editions and is available in both sizes. Furthermore, this retro watch comes with a black or matte silver dial and with or without a GMT hand. Models with this extra hand are able to display three time zones at once: one using the conventional hands, the second via the 24-hour bezel, and the third with the 24-hour hand. Every Airman No1 is limited to a run of 1,000 pieces. If you're lucky, you may even find a never-worn version for less than 1,100 USD. Other standard edition models, such as the Airman Vintage "The Chief" and Airman "DC 4" fall in a similar price range.

Fans of pilot's chronographs are sure to enjoy the Glycine Airman Airfighter. The skeletonized model with the reference number GL0051 demands about 2,100 USD new. Black chronographs with a PVD coating and GMT hand require an investment of some 3,300 USD.

Features of the Airman

The Combat Sub sees the addition of a typical diving watch to Glycine's catalog. It has a depth rating of 200 m (20 bar, 656 ft), a unidirectional rotating bezel, and a generous coating of luminous material on its hands and indices. The case is available in stainless steel or bronze. A few models feature a black or gold PVD coating. You'll also find two-tone timepieces that look like something straight out of the 1980s. With sizes ranging from 42 to 48 mm, there's something for every taste and wrist. There's also no shortage of band options, from stainless steel or leather to textile or silicone.

At only 560 USD new, the 42-mm editions on a stainless steel link bracelet are fantastic entry-level diving watches. Their larger, 48-mm sister models are slightly more expensive at about 780 USD. Both the bronze and gold-plated versions change hands for roughly 890 USD.

The Combat Sub Aquarius is one of this collection's top models. Thanks to its 500 m (50 bar, 1,640 ft) of water resistance and helium escape valve, this model can join professional divers on saturation dives. The valve sits on the left side of the case at 7 o'clock and screws down into the case. The ETA caliber 2824-2 powers this timepiece and lends it its date display. An integrated rubber strap holds the watch securely on your wrist. Prices for this model begin around 1,000 USD.

Features of the Combat Sub

The Combat 6 is one of Glycine's most elegant watches, making it a great choice for at the office. With 50 m (5 bar, 164 ft) of water resistance, this timepiece can stand up to the challenges of everyday life. Many models feature a two-tone case or a gold-plated stainless steel case. In terms of size, you can choose from 36, 40, or 43-mm models. The smallest editions are wonderful women's watches and feel especially classic thanks to their gold PVD coating. What's more, the version with the reference number GL0247 boasts a moon phase display at 6 o'clock and a date display at 3.

The automatic caliber GL280 powers the time, date, and moon phase displays. This movement comes with a 38-hour power reserve. Prices for a mint-condition ref. GL0247 come in at around 890 USD. If you prefer the 43-mm three-hand model with a date display, be prepared to spend about 670 USD.

Are Glycine watches of good quality?

Glycine produces quality Swiss watches and sells them at affordable prices. The company has over a century of watchmaking history to look back on and relies on proven mechanical calibers that you'll also find in much more expensive models from other manufacturers. Their fantastic value for money makes Glycine timepieces the perfect entry into the world of mechanical pilot's and diving watches.

Eugène Meylan founded Glycine in Biel, Switzerland in 1914. The company was already producing miniature movements and shipping them to customers in England and the USA in the 1920s. The 1930s saw the release of their first automatic watches and chronometers. In 1938, the company exhibited at the Basel Watch Fair for the first time and hasn't missed a year since. Today, this event is known as Baselworld and is one of the industry's most important trade fairs.

In the 1950s, Glycine released their Vacuum Chronometers, a series of especially water-resistant and robust wristwatches. Glycine survived the quartz crisis of the 1970s and released a number of quartz watches in the 1980s. Businessman Hans Brechbühler purchased the company in 1984. Over the course of the 1990s, Glycine began producing ever more mechanical timepieces. The Swiss company Altus Uhren Holding AG acquired the Glycine brand in 2011 and appointed Stephan Lack its CEO. In 2016, Glycine changed hands once more, this time to the US-based Invicta Watch Group. Invicta remains Glycine's parent company to this day.