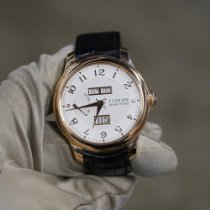 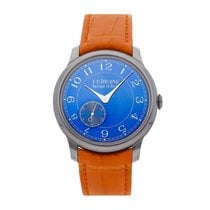 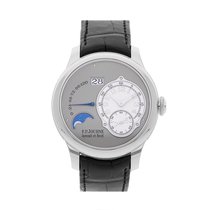 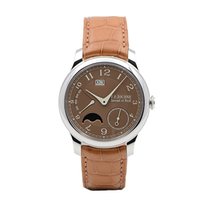 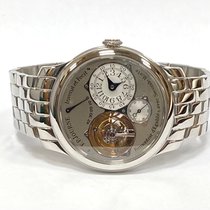 F.P. Journe watches are a unique combination of watchmaking artistry and technological innovation. This Swiss watch manufacturer has remained independent since its foundation in 1999. One of their top models is the Souveraine Chronomètre à Résonance.

Watches from F.P. Journe stand out with their technological innovations, high-end materials, extensive handicraft, and low production numbers. Established in 1999, this company produces timepieces of a quality on par with the likes of Patek Philippe and A. Lange & Söhne.

Within a year of its foundation, F.P. Journe had put their masterful watchmaking on full display with the Souveraine Chronomètre à Résonance. This revolutionary timepiece features two balances synchronized in such a way that they resonate. In fact, the Chronomètre à Résonance was the world's first wristwatch to achieve acoustic resonance.

The Élégante and Classique collections are also popular among fans of the brand. The former contains watches with barrel-shaped cases and an electromagnetic movement with an 18-year standby mode. In the Classique collection, you'll find the famous Chronomètre Bleu with a case made of tantalum, a rare metal.

Prices at a Glance: F.P. Journe

How much do F.P. Journe watches cost?

The titanium Élégante is among the most affordable F.P. Journe watches, with prices starting around 26,000 USD for the 40-mm edition. In the middle of the price range, you'll find timepieces like the Octa Lune and platinum Octa Reserve de Marche selling for between 65,000 and 71,500 USD.

On the next level up, you'll find watches like the Chronomètre à Résonance and Tourbillon Souveraine – both made of platinum. Prices vary by production year and condition but generally sit well above 120,000 USD. Select models even demand up to 240,000 USD. Then there's the Tourbillon Souveraine Vertical. Limited to a run of 20 pieces, you'll need at least 295,000 USD on hand to purchase this exclusive timepiece – if you can find one, that is.

About the Tourbillon Souverain

The Tourbillon Souverain is among F.P. Journe's most creative models. The manufacturer produced this 40-mm watch between 2003 and 2018 and offered versions in rose gold and platinum. François-Paul Journe himself personally developed the manual Calibre 1403 with a tourbillon. The tourbillon boasts a so-called "remontoir d'égalité" mechanism, which guarantees exceptional precision thanks to its steady transfer of energy.

As its name implies, the tourbillon is the star of the show. It sits prominently within a cutout in the silver or rose-gold dial at 9 o'clock. There's also a power reserve indicator at 12 o'clock, so you always know how much of the watch's 42-hour power reserve is left. The hours and minute appear on a subdial at 3 o'clock, while the small seconds sits at 6. The Calibre 1403 is made of rose gold and ticks at a frequency of 21,600 vibrations per hour (vph).

You can find listings for the Tourbillon Souverain on Chrono24. Regardless of the case material, you can expect to pay around 183,000 USD for a model on a leather strap. Versions on a matching platinum or rose gold bracelet are rare and generally sell for a few thousand dollars more.

In 2000, F.P. Journe introduced the world's first wristwatch with acoustic resonance: the Chronomètre à Résonance. The manufacturer achieves this using two balance wheels on independent gear trains. As they tick, the balance wheels synchronize and begin to resonate, much like a tuning fork. F.P. Journe has developed multiple resonating calibers, including the Calibre 1520. Crafted from 18-karat rose gold, this manual caliber comes with only one barrel and has a balance frequency of 21,600 vph (or 3 Hz).

Of course, two gear trains mean two time displays and crowns. The Calibre 1520 comes with a 24-hour display on the left and a 12-hour display on the right. Both displays feature a small seconds at 6 o'clock. What's more, a power reserve indicator at 12 means you always know when you need to wind your watch. A small opening in the middle of the dial provides a view of the differential. Finally, tempered blue steel hands complete the look.

F.P. Journe offers eight versions of the Chronomètre à Résonance. In terms of case material, you can choose between 18-karat rose gold or platinum. The manufacturer produces both 40 and 42-mm editions. Band options include a matching rose gold or platinum bracelet or a black leather strap. A platinum watch on a leather strap will set you back roughly 230,000 USD. Be sure to have several thousand dollars more on hand for a model on a metal bracelet.

Octa Calendrier With the Calibre 1300.3

F.P. Journe launched the automatic Octa Calendrier in 2004 and ceased its production in 2015. This model was the first wristwatch to combine a retrograde annual calendar with an oversized date. It also boasts an impressive 120-hour power reserve. This is all possible thanks to the rose gold Calibre 1300.3.

You can choose from rose gold or platinum models, as well as case sizes of 38 or 40 mm. While the platinum edition has a silver dial, that of the rose gold variant is also rose gold. One of the most unusual and eye-catching features is the date display, which runs counterclockwise along the edge of the dial from 1 to 6 o'clock. A central tempered blue hand points to the current date. The month and day appear in windows and also sit on the dial's left half. An off-center time display shows the hours and minutes on the right side of the dial. This display includes a small seconds at its 6 o'clock position. You can purchase this watch mounted on a leather strap or a platinum or rose gold bracelet.

A 40-mm Octa Calendrier on a leather strap requires an investment of about 66,500 USD.

The Élégante 40 mm is the first line of F.P. Journe watches geared specifically toward women. The 40-mm stainless steel case is available in titanium, 18-karat gold, or platinum. Twelve applied Arabic numerals display the time on the white dial. There's also a small seconds at 6 o'clock. However, the true highlight of the Élégante 40 mm is its unique electromagnetic movement.

The Calibre 1210 features a mechanical motion sensor at 4 o'clock. If it detects no movement for 35 minutes, the watch automatically goes into standby mode. However, a microprocessor continues to track the time in the background so that the hands can jump to the correct position the next time there's movement. Thanks to this mechanism, this model has an incredible battery life of eight to ten years with regular wear. In standby mode, that battery life increases to 18 years. Prices for this timepiece sit around 26,000 USD.

F.P. Journe announced the Chronomètre Bleu in 2009. Its round 39-mm case is made of tantalum, a highly uncommon material in the realm of watchmaking. What makes this metal so special is its dark grey-blue shimmer. As you may have guessed from the name, blue is the design's dominant color. Both the dial and leather strap come in a matching shade of blue. The dial also features Arabic numerals stamped in white and a small seconds between 7 and 8 o'clock.

The manual Calibre 1304 powers the Chronomètre Bleu. The manufacturer makes its baseplate and bridges from 18-karat rose gold. The balance ticks at 21,600 vph, and double barrels provide the watch with a 56-hour power reserve. A transparent sapphire crystal case back enables you to watch the stunning movement at work. Mint-condition editions demand prices of about 60,500 USD on Chrono24.

Frenchman François-Paul Journe founded his company, F.P. Journe, in Geneva, Switzerland in 1999. A passionate restorer of antique clocks, Journe began his watchmaking career by producing pocket watches in the 1970s and 80s. Journe has always worked according to the Latin motto "invenit et fecit," which translates to "invented and made." In fact, this motto is now his company's slogan.

F.P. Journe is a rather reserved and discreet brand. They keep their clients' names private, and they don't bother with signing famous brand ambassadors. Furthermore, with production numbers of less than 1,000 timepieces per year, F.P. Journe is among the most exclusive watch brands alongside Roger Dubuis, Greubel Forsey, A. Lange & Söhne, and Patek Philippe.