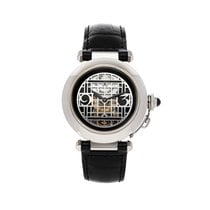 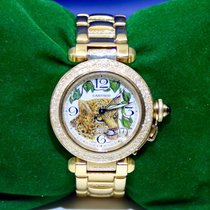 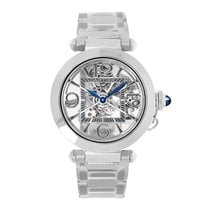 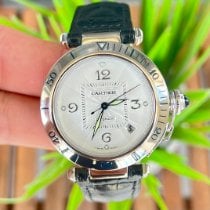 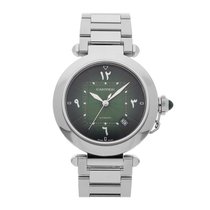 Cartier Pasha: The Watch With a Chained Crown

The Cartier Pasha has a history stretching back over 80 years. Perhaps its most distinguishing feature is a protective crown cap attached to the case with a chain. Top models come with complications like a chronograph or tourbillon.

One of the First Water-Resistant Watches

Cartier introduced the first water-resistant wristwatches in the 1930s. However, due to complex sealing mechanisms, most of the era's square and rectangular models were only water-resistant for a short time. It's always been easier to make round cases water-resistant. Thus, in 1943, the Parisian company presented a gold watch with a round case, screw-down case back, and centrally-positioned lugs. Other defining features included a grid over the watch crystal and a screw-down cap for the crown. After winding and setting the watch, the wearer could screw the cap back on the crown. Losing the cap was almost impossible, as it was attached to the case by a small chain. Today, Cartier leaves room for a personalized engraving on the side of the case just below the crown.

The Pasha's extraordinary crown guard has never undergone any changes and remains a vital part of every timepiece. However, the popular dial grid only appears on certain models, making them particularly coveted among collectors. The Pasha collection also includes women's models, such as the Miss Pasha and Pasha C, and chronographs like the Pasha Seatimer Chronograph with an automatic caliber and water resistance to 100 m (10 bar, 328 ft).

A widespread myth claims the Pasha was made in the 1930s at the behest of the Pasha of Marrakesh, a great admirer and friend of Louis Cartier. In reality, there is no evidence to support this version of events, and the Pasha wasn't actually produced or named until 1985.

In 2020, Cartier released several new men's and women's models inspired by the original's design. Like ever more Cartier watches in recent years, most of these timepieces use in-house calibers. One of the most impressive examples is the white gold Pasha Skeleton Flying Tourbillon, which costs about 120,000 USD. There's also the similarly priced Pasha de Cartier with a panther motif, which combines an in-house caliber with an abundance of diamonds.

5 Reasons to Buy a Pasha

Prices at a Glance: Cartier Pasha

How much do Pasha watches cost?

Fans of round watches will enjoy the Pasha collection. You can get a pre-owned stainless steel model with a quartz or automatic caliber for as little as 1,800 USD. The Pasha Chrono is perfect for fans of watches with a stopwatch function. Prices for this precise, quartz-powered chronograph begin around 2,300 USD, while automatic chronographs start at 2,800 USD in good condition and 6,000 USD new. A mint-condition three-hand model with an automatic caliber will set you back about 3,600 USD.

If you prefer gold watches, be prepared to spend at least 5,400 USD for a pre-owned three-hand timepiece. One example is the 38-mm ref. 1990 in 18-karat yellow gold produced around the turn of the millennium. Cartier also offered versions with the popular grid atop its crystal. At roughly 8,500 USD, watches from the latter group are much more expensive than their grid-free counterparts.

Cartier outfits the new three-hand models from 2020 with in-house calibers. These timepieces share their Art Deco design with the original Pasha from 1985. The manufacturer offers these timepieces in yellow and rose gold in addition to stainless steel. The 35-mm women's editions are especially tidy. Other than Arabic numerals at 3, 6, 9, and 12 o'clock, the only feature on their dials is a railroad minute track. The men's models measure 41 mm in diameter and have a date display at the 4:30 position. Regardless of size, every timepiece is water-resistant to 100 m (10 bar, 328 ft).

These models also boast Cartier's patented "QuickSwitch" band mechanism, which makes changing out the two bands delivered with each watch a breeze. What's more, Cartier took the innovations one step further by developing a patented system that allows the wearer to shorten or lengthen the metal bracelet without any need for tools or specialized equipment. The in-house caliber 1847 MC powers these watches, replacing the ETA movements found in previous models. This movement features Genevan Stripes on its bridges and rotor and has a 48-hour power reserve.

The Coveted Pasha With a Grid

Pashas with a grid on the front crystal are rare and coveted collector's items. With any luck, you may be able to get a well-maintained stainless steel model for around 3,600 USD. Plan to spend an additional 1,200 USD for the yellow gold edition. Timepieces with diamonds on the otherwise rather masculine grid feel especially feminine. These 32-mm white gold luxury watches cost about 6,000 USD. That price climbs to 9,100 USD if the diamonds continue onto the bezel.

In 1997, Cartier launched a limited-edition Pasha with a grid in celebration of the company's 150th anniversary. The Pasha 150th Anniversary Limited Edition had a limited run of 1,847 pieces – a reference to the year Cartier was founded. This automatic watch has a red gemstone on the crown, and Roman numeral hour markers. A well-maintained Pasha 150th Anniversary costs about 6,000 USD.

If you're looking for a diving watch with a chronograph function, you should consider the Pasha Seatimer Chronograph. This 42-mm timekeeper is water-resistant to 100 m (10 bar, 328 ft) and features a unidirectional diving bezel. The ref. 2995 comes in stainless steel and with your choice of a black or white dial. Stamped line indices and Arabic numerals at 3, 6, 9, and 12 o'clock adorn the dial. There's also a date display at 4:30. Prices for a mint-condition model come in at around 8,500 USD, while pre-owned pieces cost less than half as much at 4,200 USD.

The rose and yellow gold editions with a black dial are especially elegant. Cartier mounts these timepieces on a gold bracelet with black rubber links. These models cost between 18,000 and 25,500 USD, depending on their condition.

The Pasha Seatimer is also available as a three-hand watch with an automatic movement and the same level of water resistance as the chronograph. Stainless steel editions measure 40 mm in diameter and feature a black or white dial. You can call this watch your own for roughly 3,000 USD, regardless of its condition. The smaller, 33-mm women's version occupies a similar price range.

For Women: The Miss Pasha and Pasha C

The Cartier Miss Pasha is targeted specifically at women. It has a small diameter of 27 mm and is only 7.6 mm thick, making it perfect for thinner wrists. A precise quartz movement keeps the watch running accurately. The crown cap is set with a synthetic spinel cabochon. A cabochon is a gemstone that has been shaped and polished but not faceted. The dial is available in pink or silver, and you can choose between a textile strap or stainless steel bracelet. The Parisian company uses stainless steel or gold for the case. Diamonds adorn some models, bringing their prices up to around 22,000 USD. More affordable stainless steel models like the ref. W3140007 cost about 3,600 USD new and as little as 2,300 USD pre-owned.

While not exclusively for women, the 35-mm Pasha C is on the smaller side for a men's watch. The Pasha C with a GMT function is especially practical since its rotatable bezel makes setting a second time zone a breeze. This is especially useful when traveling. What's more, these timepieces also have a date display at the 4:30 position. Fittingly, a globe made up of latitudinal and longitudinal lines decorates the dial. You can purchase a Pasha C with a GMT function for about 2,500 USD in mint condition. Used models demand similar prices.

The Cartier Pasha Flying Tourbillon Skeleton is a masterpiece of "haute horlogerie." Its 18-karat white gold case is 42 mm in diameter. The dial is actually comprised of the movement's bridges. Cartier outfits this watch with the in-house manual caliber 9457 MC, which has a Geneva Seal. The Geneva Seal is a mark of quality and origin for mechanical watches built and regulated in the canton of Geneva. The highlight of this watch is the tourbillon at 6 o'clock. Abraham-Louis Breguet invented the {keyword-tourbillon watches,tourbillon} in the 18th century, and these timepieces are still considered the pinnacle of watchmaking to this day. The Cartier Pasha Flying Tourbillon Skeleton can be yours for around 103,000 USD.