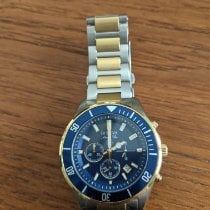 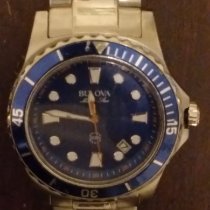 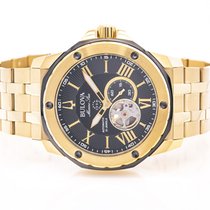 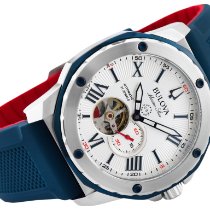 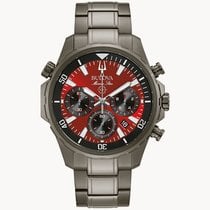 Bulova Marine Star: A Watch for the Sea

Bulova has created a series for water sport lovers with their Marine Star collection. The line is full of precision quartz watches with sporty, waterproof designs that offer amazing quality for your money.

The models from Bulova's Marine Star collection make ideal sailing, surfing, kayaking, swimming, and snorkeling companions. The current versions feature "100" printed on the dial surrounded by a wreath of stars, in reference to the maximum depth the watch can withstand (100 m, or 10 bar). The watch features a screw-down crown, which ensures water resistance. While watches waterproof to 200 m (20 bar) are recommended for recreational diving, the current Marine Star watches are only waterproof to 100 m. However, some dealers still offer older versions that are waterproof to 200 m, such as the 98B209. With a rotatable bezel, this watch fulfills all the requirements of a standard diving watch.

Currently, the men's timepieces in the Marine Star collection are quartz-powered chronographs. Their timer function emphasizes the collection's sporty and functional character. You can control the timer the same way you would on a mechanical watch. If you press the push-piece at two o'clock, the timer starts. Pushing the push-piece again will stop it. The push-piece at four o'clock resets the stopwatch hand back to zero.

Which Marine Star should I purchase?

If you actively participate in water sports or value a sporty-looking timepiece, then the Marine Star is an alluring collection. The watches in the series are waterproof to 100 m (10 bar) and impervious to shocks and rough handling due to the quartz movement. If you're into competitive sports, then a chronograph is a useful extra, as it also functions as a timer.

The watches in the Marine Star series are quite affordable. New, they cost between 200 and 400 euros. In contrast, the 98B209, which is no longer in production, costs over 500 euros new. The advantage is that this timepiece is waterproof to 200 m, making it possible for you to dive even deeper than usual with your wristwatch.

Due to its immense dimensions, the Marine Star looks best on larger wrists. Bulova offers it with a case size of 44 mm and 43 mm, both a bit larger than the standard men's watch. The 98B209 is even larger, with a diameter of 45 mm.

Bulova also offers some Marine Star models designed for women. These watches are smaller, with a diameter of 32 mm. Like the men's versions, they're waterproof to 100 m (10 bar). However, their design is more elegant than sporty. The bezel and dial are set with diamonds.

Some models feature a fixed bezel with six decorative socket head screws, giving the watch a porthole design. This design was inspired by famous timepieces such as Audemars Piguet's Royal Oak Offshore. The Marine Star is available in a similar style in stainless steel (98B258), rose gold-plated (98B014), bicolor with yellow gold accents (98B277), matte gray (98B259), and black (98B223).

The models 98B230, 98B249, and 98B250 all resemble famous diving watches. They have a rotating bezel with a zero marker and minute track for the first quarter of an hour of your dive.

Alternatively, Bulova offers a few versions with an internal bezel controlled by an additional crown at 10 o'clock. This serves the same purpose as a conventional bezel: You can sync it to your dive and keep track of how long you've been underwater via the scale and minute hand. This timepiece comes with a silver-gray stainless steel case and a white dial (96B255) or with a blue dial (96B256). Additionally, there's a version with a rose gold finish and a black dial (97B153).

Bulova is one of the most famous American watch manufacturers. The Czech immigrant Joseph Bulova founded the company in 1875 in New York City, where its headquarters remain today. The first Bulova wristwatches were made in 1919. In 1926, their first radio ad appeared. The ad featured a short signal tone to indicate the time, which people could use to synchronize their watches. Back then, this was novel, as watches and radio broadcasting were still new and not yet widespread.

In 1960, Bulova introduced the Accutron, which revolutionized watchmaking. It used a tuning fork in place of a balance wheel. Using electricity instead of mechanical power was a key innovation for commercial wristwatches. The buzzing of the tuning fork was very faint, and its frequency of 360 Hz ensured the timepiece only deviated around 60 seconds a month. For around 10 years, the Accutron was the watch to beat in terms of precision. However, Seiko introduced the first mass-produced quartz watch, the Astron 35SQ, around Christmas 1969. Sales for the Accutron, up until then Bulova's showpiece, quickly began to drop and it was eventually discontinued.

Citizen, Seiko's largest Japanese competitor, took over Bulova in early 2008. The US company continues to operate independently, but it works closely with its parent group. The tuning fork, the company's logo, appears on many of their watches, such as the Accutron II.