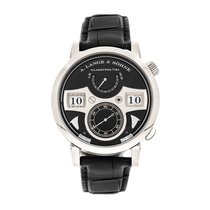 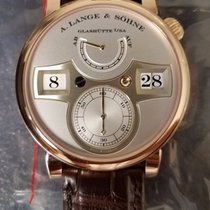 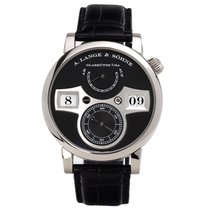 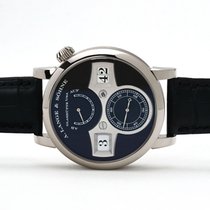 A. Lange & Söhne's Zeitwerk is the first wristwatch to feature a mechanical caliber with a digital (numeric) time display, making it an extremely innovative watch. Top models are made of platinum or white gold and feature a minute repeater.

A Watch With No Hands

Mechanical watches with a digital time display are extremely rare in the world of watchmaking. The A. Lange & Söhne Zeitwerk is one such timepiece and the first mechanical wristwatch from this Glashütte-based manufacturer to display the time using jumping hours and minutes. The only hands are located on the small seconds dial and power reserve display. The famous Five-Minute Clock in the Dresden Semperoper served as the inspiration for this timepiece.

This collection's most popular models include those with a chiming mechanism and the Zeitwerk Handwerkskunst. In German, "Handwerkskunst" means "craftsmanship." The Zeitwerk edition is made of platinum and limited to a run of 30 pieces. Its case and movement are both intricately engraved by hand. Every watch in the Handwerkskunst series demonstrates A. Lange & Söhne's watchmaking prowess and is the embodiment of haute horlogerie. You can find other Handwerkskunst models in the Lange 1, 1815, and Richard Lange collections.

The A. Lange & Söhne Zeitwerk Minute Repeater is this series' most complicated model. This timepiece has been available in platinum since 2015, and in 2020, the manufacturer introduced a limited-edition version in white gold. The Zeitwerk Minute Repeater was the first mechanical watch to combine a decimal minute repeater with a jumping time display. This Zeitwerk relays the time acoustically, broken down into hours, ten minutes, and minutes.

Reasons to Buy an A. Lange & Söhne Zeitwerk

Prices at a Glance: A. Lange & Söhne Zeitwerk

How much does an A. Lange & Söhne Zeitwerk cost?

You can purchase an entry-level A. Lange & Söhne Zeitwerk, such as the ref. 140.032 starting around 79,000 USD. If you're looking for something with an automatic chiming mechanism, you should take a closer look at the Zeitwerk Decimal Strike. One example, the ref. 143.050, comes in so-called "honey gold" and costs roughly 112,000 USD. The most exclusive Zeitwerk model is the white gold Zeitwerk Minute Repeater ref. 147.028 from 2020. Only 30 copies exist of this limited edition, which demands well over 470,000 USD.

Prices for Zeitwerk Watches With a Chiming Mechanism

If you're interested in a Zeitwerk with a chiming mechanism, you can choose from several models with either an automatic mechanism or a minute repeater. Each timepiece is 44.2-mm in diameter, making them 2.3 mm larger than the standard Zeitwerk.

By pressing the pusher, the caliber L043.5 relays the time acoustically, broken down into hours, ten minutes, and minutes. It does so using a gong and two small hammers. A sapphire crystal case back provides a view of the elaborately decorated movement within. The platinum Zeitwerk Minute Repeater ref. 147.025 debuted in 2015. It comes with a solid silver dial and changes hands for approximately 454,000 USD in mint condition.

A white gold model with a dark blue dial followed in 2020. The manufacturer limited it to a production run of 30 pieces, making this edition very difficult to find on the market. As of publication, there was a single listing for this watch on Chrono24, and its asking price was 530,000 USD. This is only slightly more than the official list price of 449,000 EUR (approx. 529,000 USD).

The Zeitwerk Striking Time and Decimal Strike both feature the caliber L043.7 with an automatic chiming mechanism. Much like a grandfather clock, when activated, this mechanism tells the time acoustically without you having to press a button. You can deactivate this feature by pressing the pusher. The Zeitwerk Striking Time represents the hours with a deep tone and the quarter hours with a high tone.

The Zeitwerk Striking Time is available in white gold, rose gold, or platinum. The white-gold edition has a black dial, while the platinum and rose gold models have solid-silver dials. New, the rose gold variant sells for around 113,000 USD. The white gold version costs an additional 3,500 USD. The platinum edition had a limited run of 100 watches and will set you back roughly 194,000 USD in mint condition.

Instead of chiming the quarter hours, the caliber L043.7 chimes every ten minutes in the Zeitwerk Decimal Strike. This special timepiece's case comes in honey gold – an especially hard precious metal alloy used exclusively by A. Lange & Söhne. Only 100 copies of the Zeitwerk Decimal Strike exist, making it particularly interesting for collectors. If you'd like to call this luxury watch your own, be sure to have around 112,000 USD on hand.

A. Lange & Söhne celebrated the Zeitwerk's 10th anniversary by announcing a new Zeitwerk model with a date ring at SIHH 2019. The Zeitwerk Date pairs a 44.2-mm white gold case with a light gray dial made of silver. A glass date ring runs around the dial's outer edge and shows the current date in red.

The watch gets its power from the caliber 043.8. This movement comes with a push-piece for setting the hour display independently at 4 o'clock. Like other Zeitwerk models, the seconds appear at 6 o'clock, directly opposite the power reserve indicator at 12. You can call a Zeitwerk Date your own for around 98,500 USD.

The Zeitwerk With a Hand-Engraved White Gold Dial

Introduced in 2012, the platinum Zeitwerk Handwerkskunst had a limited run of 30 pieces. This model's most stunning feature is its intricately hand-decorated white gold dial with delicate tremblage engraving. Its caliber, the L043.4, features a lever and escape wheel in hardened 18-karat gold, making it truly special. Furthermore, like all A. Lange & Söhne movements, it boasts elaborate decoration, which you can view through the sapphire crystal case back. You can purchase a pre-owned version of this rare luxury watch for about 236,000 USD.

The Zeitwerk is unmistakably a Lange watch. The large numerals displaying the time immediately call to mind images of Lange's outsize date display. Unlike most Lange date displays, the Zeitwerk's designers decided to forego the divider between the first and second numerals. The second markers on the small seconds subdial are also reminiscent of those found on other models from this German manufacturer. A similar railroad minute scale features in the 1815 series, as well.

The round case also marks this timepiece as coming from A. Lange. The smallest version of the watch is 41.9 mm in diameter, making it a fantastic dress watch. One advantage of the digital display is that the minute window peeks out from under your sleeve so that you can tell the time at a glance.