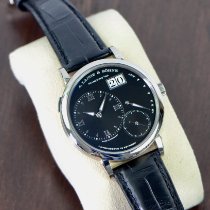 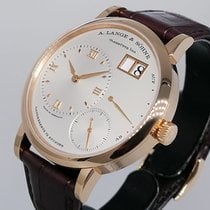 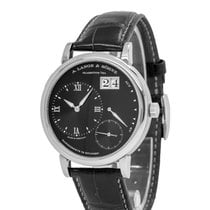 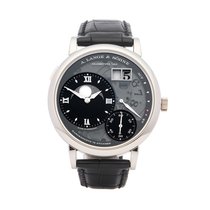 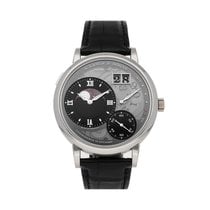 The Grand Lange 1 is the big sister of A. Lange & Söhne's most famous luxury watch. Its case is over 40 mm in diameter and comes in gold or platinum. This collection's rare top model even glows in the dark.

5 Reasons to Buy a Grand Lange 1

A Design Icon in a Larger Case

The Grand Lange 1 Moon Phase "Lumen" is this collection's top model and one of the few Lange watches to feature glow-in-the-dark displays, including the moon phase display and outsize date. A semitransparent sapphire glass dial allows you to admire the movement from the front. On the back, you'll find an unobstructed view of the intricately engraved balance cock, swan-neck fine regulation, tempered blue screws, and other components. This timepiece is limited to a run of 200 pieces.

How much does an A. Lange & Söhne Grand Lange 1 cost?

The Grand Lange 1 premiered in the early 2000s. At that time, large watches were all the rage, making the original 38.5-mm Lange 1 less desirable for men. Trends have continued to change, and the manufacturer has since released numerous watches under 40 mm in diameter.

In 2012, A. Lange & Söhne outfitted the Grand Lange 1 with a new in-house caliber: the L095.1. Thanks to this movement, the displays no longer overlap, restoring this watch's sense of harmony. The current model is 40.9 mm in diameter and available in platinum, white gold, or pink gold.

Older models with overlapping displays are a bit less expensive. For example, a pre-owned pink gold model demands around 24,000 USD, while a white gold timepiece sells for about 23,000 USD.

How much does the Grand Lange 1 Moon Phase cost?

A moon phase display occupies the upper half of the Grand Lange 1 Moon Phase's main dial. The moon disc is made of solid gold and represents the phases of the moon with remarkable accuracy. A deep blue night sky with 382 stars surrounds Earth's main satellite.

Inside, you'll find the perfectly finished in-house caliber L095.3, which provides this timepiece with a 72-hour power reserve. This impressive number is achieved using only one mainspring. A. Lange & Söhne also produces the balance spring themselves. The final movement is 4.7 mm thick, and the finished watch has a total height of 9.5 mm, making it the ideal dress watch.

The pink gold Grand Lange 1 Moon Phase costs around 36,000 USD in mint condition. You can save a few hundred dollars by purchasing a pre-owned timepiece. The most expensive model is made of platinum and sells for prices between 41,000 and 45,500 USD.

Prices for the Grand Lange 1 "Lumen" with a Glass Moon

The platinum Grand Lange 1 "Lumen" and Grand Lange 1 Moon Phase "Lumen" stand out from the rest of A. Lange & Söhne's catalog. They are among the few watches from this Glashütte-based manufacturer to feature luminous displays. In addition to the hands and indices, the outsize date display also glows in the dark. To do so, black date numerals for 0-9 are printed on a glass disc atop a background coated in luminous material, while the tens cross has its own coating of luminous material. The cross sits beneath a semi-transparent sapphire glass dial so it can charge throughout the day.

The Grand Lange 1 Moon Phase "Lumen" even features a glow-in-the-dark moon phase display. Its moon is made of glass instead of solid gold, as is the case with other Lange watches featuring a moon phase. This small glass moon sits amidst 1,164 stars. Luminous material beneath the glass disc allows the moon and stars to glow in the dark. If you want to call this platinum luxury watch your own, plan on spending anywhere from 85,500 USD for a pre-owned timepiece to 88,500 USD for a new one. Both Grand Lange 1 "Lumen" models are limited to runs of 200 pieces. The version without a moon phase demands around 79,000 USD.